No. 5 Georgia carries on its tradition as Running Back U 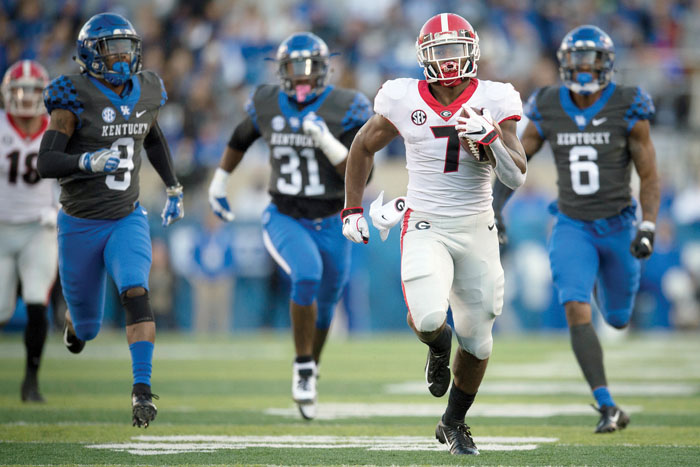 FILE - In this Saturday, Nov. 3, 2018, file photo, Georgia running back D'Andre Swift (7) runs for a touchdown during the second half an NCAA college football game against Kentucky in Lexington, Ky. The Bulldogs have produced dynamic running backs over the years, from Herschel Walker to Todd Gurley. The trend continues this season with Holyfield and D'Andre Swift. (AP Photo/Bryan Woolston, File)

ATHENS, Ga. (AP) — When Elijah Holyfield was pondering where he wanted to go to college, he certainly took an interest in history.

“It was a very big deal to me. I’ve watched Georgia football for a long time and I’ve really loved all the Georgia backs,” said Holyfield, son of former heavyweight champion Evander Holyfield . “It had a lot to do with my decision.”

From Herschel Walker through the 1-2 punch of Nick Chubb and Sony Michel, the No. 5 Bulldogs might as well be known as Running Back U.

They’re living up to reputation again with the current backfield duo of Holyfield and D’Andre Swift.

In last week’s pulverizing 34-17 victory over Kentucky , which locked up Georgia’s spot in the Southeastern Conference championship game, Swift rushed for 156 yards and two touchdowns, Holyfield tacked on a career-best 115 yards and a score, and the Bulldogs finished with a season-high 331 yards on the ground against one of the nation’s top-ranked defenses.

Georgia (8-1, 6-1, No. 5 CFP) leads the SEC in rushing (233.8 yards per game), carrying on a tradition that goes back as far as 1942 Heisman Trophy winner Frank Sinkwich but really picked up steam with the arrival of Herschel Walker.

Walker, who capped his brilliant career by capturing the Heisman in 1982, is still recognized as the greatest back in school history. But he’s had plenty of challengers over past 3½ decades.

Since Walker left school a year early to play in the ill-fated United States Football League, seven Georgia running backs have been picked in the first round of the NFL draft — an esteemed list that doesn’t even include Terrell Davis, who was only a sixth-rounder but went on to a Hall of Fame career with the Denver Broncos.

More recently, Georgia’s pipeline has grown to include Todd Gurley, Sony Michel and Nick Chubb — who actually were on the same team in 2014 and are all now thriving in the NFL. Gurley stars for the Los Angeles Rams , earning All-Pro honors in 2017 and leading the league in rushing this season. Michel is starting for the New England Patriots as a rookie, while Chubb is getting significant playing time with the Cleveland Browns .

Coach Kirby Smart certainly relies on that heritage when he’s trying to persuade a high school running back to sign with the Bulldogs.

“I think it helps tremendously to have the guys, the history of Robert Edwards, Garrison Hearst, Terrell Davis, I mean Herschel, just back after back after back after back,” Smart said. “Now it’s probably more prominent than it’s ever been because of the stage that Todd is on and what he’s been able to do, and Nick and Sony’s exposure last year through the national championship game.

What does the coach tell prospective backs who are considering Georgia?

“If you’re a premier back in the country and you say, ‘I want to go somewhere that I can learn to play in a pro style, catch the ball in the backfield, and I also want to be able to protect so that I can increase my value, and I also want to have durability where I’m not going to be beat up when I come out of there,’ there’s nowhere better to go,” Smart replied.

Indeed, Georgia has relied on an abundance of talented running backs the last few seasons.

Previous coach Mark Richt was able to land Gurley and Keith Marshall in the same recruiting class — they were dubbed “Gurshall” in a nod to Walker — though Marshall never realized his full potential because of injuries. Richt pulled off another double-coup when he landed Chubb and Michel.

Holyfield, a junior, signed with the Bulldogs even though he knew he’d spend at least one season playing behind Chubb and Michel (and it wound up being two when both stayed through their full eligibility). Swift came aboard last season, even with all those talented backs on the roster. Zamir White, touted as the nation’s top prospects, signed with Georgia coming into this season but was sidelined by a knee injury .

Holyfield said the competition for playing time makes everyone better. He leads the Bulldogs with 674 yards rushing, but Swift, who has battled injuries and finally seems to be at full strength, has gained 622 yards. Swift has also been an effective weapon in the passing game with 17 receptions for 161 yards.

“When you have somebody who’s just as good as you playing next to you, it pushes you every single day,” Holyfield said. “I know I can’t take a day off because he’s not going to take a day off.”

Georgia faces Auburn (6-3, 3-3) on Saturday in the 122nd renewal of the Deep South’s oldest rivalry.

The Tigers certainly know what they’re up against.

“Swift and Holyfield kind of resemble the backs they’ve had in the past,” defensive tackle Dontavius Russell said. “It’s always a challenge.”