‘Sully’ Sullenberger: We saved 155 lives on the Hudson Rivers. Now let’s vote for leaders who’ll protect us all. 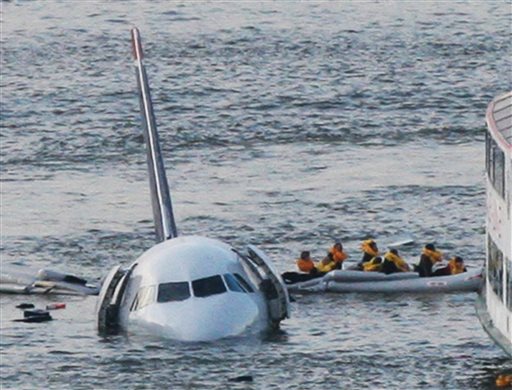 In this Jan. 15, 2009 file photo, passengers in an inflatable raft move away from US Airways Flight 1549 that went down in the Hudson River in New York. The jet ditched in the Hudson River after both engines failed when they ingested birds shortly after takeoff. All 155 people on board were safe; Captain Chesley Sullenberger and other crew members were hailed as heroes. (AP Photo/Bebeto Matthews, File)

By Chesley B. “Sully” Sullenberger III

Nearly 10 years ago, I led 154 people to safety as the captain of US Airways Flight 1549, which suffered bird strikes, lost thrust in the engines and was forced to make an emergency landing on the Hudson River. Some called it “the Miracle on the Hudson.” But it was not a miracle. It was, in microcosm, an example of what is needed in emergencies – including the current national crisis – and what is possible when we serve a cause greater than ourselves.

On our famous flight, I witnessed the best in people who rose to the occasion. Passengers and crew worked together to help evacuate an elderly passenger and a mother with a 9-month-old child. New York Waterway took the initiative to radio their vessels to head toward us when they saw us approaching. This successful landing, in short, was the result of good judgment, experience, skill – and the efforts of many.

But as captain, I ultimately was responsible for everything that happened. Had even one person not survived, I would have considered it a tragic failure that I would have felt deeply for the rest of my life. To navigate complex challenges, all leaders must take responsibility and have a moral compass grounded in competence, integrity and concern for the greater good.

I am often told how calm I sounded speaking to passengers, crew and air traffic control during the emergency. In every situation, but especially challenging ones, a leader sets the tone and must create an environment in which all can do their best. You get what you project. Whether it is calm and confidence – or fear, anger and hatred – people will respond in kind. Courage can be contagious.

Today, tragically, too many people in power are projecting the worst. Many are cowardly, complicit enablers, acting against the interests of the United States, our allies and democracy; encouraging extremists at home and emboldening our adversaries abroad; and threatening the livability of our planet. Many do not respect the offices they hold; they lack – or disregard – a basic knowledge of history, science and leadership; and they act impulsively, worsening a toxic political environment.

As a result, we are in a struggle for who and what we are as a people. We have lost what in the military we call unit cohesion. The fabric of our nation is under attack, while shame – a timeless beacon of right and wrong – seems dead.

This is not the America I know and love. We’re better than this. Our ideals, shared facts and common humanity are what bind us together as a nation and a people. Not one of these values is a political issue, but the lack of them is.

This current absence of civic virtues is not normal, and we must not allow it to become normal. We must rededicate ourselves to the ideals, values and norms that unite us and upon which our democracy depends. We must be engaged and informed voters, and we must get our information from credible, reputable sources.

For the first 85 percent of my adult life, I was a registered Republican. But I have always voted as an American. And this critical Election Day, I will do so by voting for leaders committed to rebuilding our common values and not pandering to our basest impulses.

When I volunteered for military service during wartime, I took an oath that is similar to the one our elected officials take: “I do solemnly swear that I will support and defend the Constitution of the United States against all enemies, foreign and domestic.” I vowed to uphold this oath at the cost of my life, if necessary. We must expect no less from our elected officials. And we must hold accountable those who fail to defend our nation and all our people.

After Flight 1549, I realized that because of the sudden worldwide fame, I had been given a greater voice. I knew I could not walk away but had an obligation to use this bully pulpit for good and as an advocate for the safety of the traveling public. I feel that I now have yet another mission, as a defender of our democracy.

We cannot wait for someone to save us. We must do it ourselves. This Election Day is a crucial opportunity to again demonstrate the best in each of us by doing our duty and voting for leaders who are committed to the values that will unite and protect us. Years from now, when our grandchildren learn about this critical time in our nation’s history, they may ask if we got involved, if we made our voices heard. I know what my answer will be. I hope yours will be “yes.”

Sullenberger is a safety expert, author and speaker on leadership and culture.