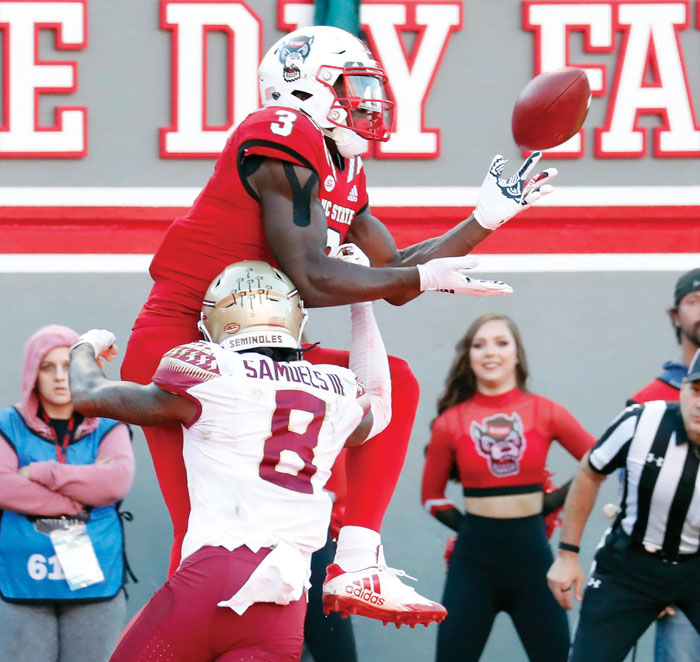 North Carolina State's Kelvin Harmon (3) hauls in a pass for a touchdown against Florida State's Stanford Samuels III (8) during the first half of an NCAA college football game in Raleigh, N.C., Saturday, Nov. 3, 2018. (AP Photo/Chris Seward)

RALEIGH (AP) — North Carolina State corrected many of the problems that had plagued the Wolfpack during two straight losses, namely by getting off to a fast start and running the ball well.

As for Florida State, there was no such strong response — only a second straight lopsided loss that inched the Seminoles closer to the end of decades-long streaks of success.

Meyers had nine catches for 125 yards and a score for the Wolfpack (6-2, 3-2 Atlantic Coast Conference), who scored the first 17 points and never looked back in a one-sided show.

“I just thought it was really good execution in a lot of ways,” Wolfpack coach Dave Doeren said.

Doeren was right. The Wolfpack moved the chains against the nation’s 12th-ranked run defense (102.9 yards), avoided major mistakes and got reliable kicking production when drives stalled.

Not that there were many, considering N.C. State had a season-high scoring output.

The ground game certainly stood out. Person scored on 1- and 4-yard runs in the first half after missing last week’s loss at No. 22 Syracuse due to injury. And Reggie Gallaspy II ran for a career-best 106 yards, part of a 177-yard output that surpassed the combined total from the losses to No. 2 Clemson followed by the Orange (172).

“It makes just everything a lot more fun, to be honest, as an offensive lineman,” Wolfpack center Garrett Bradbury said. “When you can just at will drive down the field running the ball, and they know it’s coming most of the time, it’s just a good feeling.”

FSU’s James Blackman threw for a career-high 421 yards and four scores in starting for Deondre Francois, with two going to Tamorrion Terry. But it didn’t stop the Seminoles (4-5, 2-5) from taking a fourth loss by at least 19 points this year.

“We’ve got to learn to translate our effort and the way we work the sidelines to the football field,” first-year FSU coach Willie Taggart said. “That’s something we didn’t do.”

FSU: Things couldn’t have been worse in last week’s 59-10 home loss to No. 2 Clemson, a performance that had Taggart openly questioning his team’s effort and whether some players quit. The Seminoles didn’t play anywhere near well enough to win this one, either, including 16 penalties for 121 yards to continue their trend of being among the nation’s most frequently flagged teams.

“I love this football team, I love our guys,” Taggart said. “They’re trying to do the things we’re asking them to do. … Our guys know how to play football. We’ve got to teach them how to win now.”

N.C. State: Put simply, it was a clean performance. The Wolfpack avoided turnovers, allowed no sacks, committed just two penalties through the first three quarters and answered any FSU push. Getting the 17-0 lead was big, too, after falling behind 14-0 at Clemson and 24-7 at Syracuse in the first quarter.

“I feel like we have the ability to bounce back after two losses and keep going,” Meyers said. “In the past once we lost to Clemson it was a real downfall for the rest of the season. But I think this team is special.”

FSU hasn’t had a losing season since 1976 and has been in a bowl game for 36 straight seasons, with the last bowl-less season coming in 1981. The Seminoles have to win two of their last three — all against AP Top 25 teams — to become bowl eligible.

Person, who provides a big-play complement to Gallaspy’s power in the run game, ran for 42 yards and capped his day with a short TD catch from Ryan Finley to make it 44-21 with 11:10 left.

FSU: The Seminoles visit No. 3 Notre Dame next Saturday.