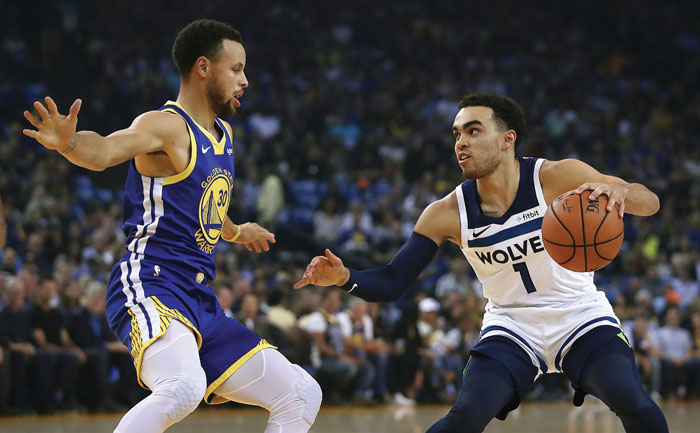 By JANIE McCAULEY, AP Sports Writer
OAKLAND, Calif. (AP) — Kevin Durant had 33 points and 13 rebounds, Stephen Curry contributed 28 points, nine rebounds and seven assists, and the Golden State Warriors beat the Minnesota Timberwolves 116-99 on Friday night for their seventh straight win.
Klay Thompson scored 22 points and hit consecutive 3-pointers 50 seconds apart early in the fourth quarter to put Golden State ahead 91-89 with 10:17 to play. Draymond Green then got back-to-back baskets, one helped by goaltending.
Derrick Rose played five minutes in the first quarter and scored three points, then didn’t return because of left ankle soreness — two nights after the 2011 MVP scored a career-high 50 points in a victory against Utah.
“Amazing story just in terms of what he’s been through,” Curry said of Rose’s feat. “It’s great for him, comeback story all about opportunity, believing in yourself.”
Andrew Wiggins led the Timberwolves with 22 points. Minnesota was outrebounded 61-39.
Jimmy Butler scored 21 for Minnesota after sitting out Wednesday to rest. Tyus Jones also returned and had eight points on 3-for-11 shooting after missing the win over the Jazz because of a sore right foot.
Durant made his first six shots, and eight of the initial 11 he took, on the way to 20 points in the first half. Green had seven of his 11 assists by the 4:40 mark of the opening quarter and has 61 assists over the past six games. He also had nine points and nine boards.
Alfonzo McKinnie added eight points and eight rebounds off the bench in the Warriors’ fifth straight home victory against the T-Wolves.
Both teams shot 50 percent or better in the first quarter.
TIP-INS
Timberwolves: Six players made a 3-pointer in the first half. … Minnesota is 0-4 on the road, three of those vs. the Western Conference. … The Timberwolves haven’t won at Oracle Arena since April 5, 2016, and have dropped 20 of the last 24 meetings against Golden State.
Warriors: Had their six-game streak of scoring 120 points or more snapped. … Andre Iguodala shot 1 for 6. … G Shaun Livingston missed his fourth straight game with soreness in his right foot. Golden State coach Steve Kerr listed Livingston as day-to-day. … Golden State had 31 assists after dishing out a season-best 39 on Wednesday.
COUSINS UPDATE
Golden State center DeMarcus Cousins has been scrimmaging full court 4-on-4 — the Warriors don’t have the bodies to go 5-on-5, Kerr said — and he is moving well and his shot looks strong as he recovers from surgery for a torn left Achilles.
Yet that doesn’t mean Cousins will be in games anytime soon.
“I love how far he’s come, but I don’t want people to get the idea that he’s getting close to coming back,” Kerr said. “It’s still going to be some time.”
UP NEXT
Timberwolves: At Portland on Sunday in the lone game outside California during a five-game stretch out West.
Warriors: Host Memphis on Monday, having won the last three meetings at home.
___
More AP NBA: https://apnews.com/tag/NBA and https://twitter.com/AP_Sports