Thunder rally from 19 down in 3rd quarter, top Hornets 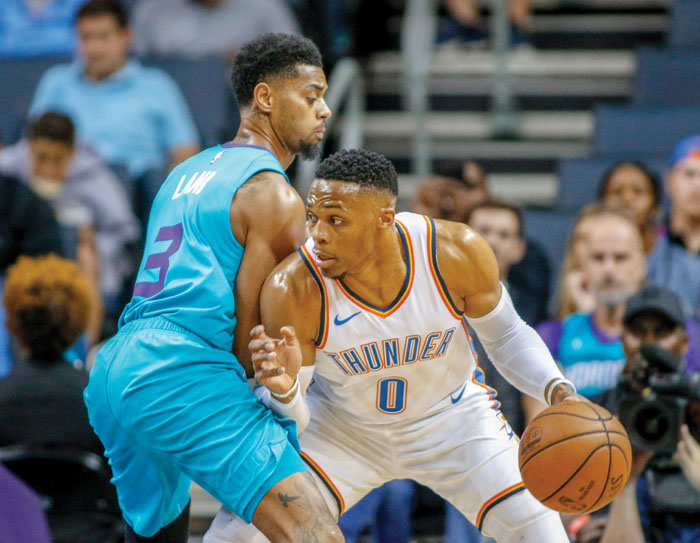 What bothered Charlotte’s first-year coach is that Alex Abrines had 25 points on five 3-pointers and Dennis Schroder was able to get to the rim effectively and add 21 more, helping the Oklahoma Thunder overcame a 19-point deficit to beat Borrego’s Hornets 111-107 for their third straight win.

Paul George had a different explanation: that’s just the way Westbrook impacts games. He called the seven-time All-Star “one of the baddest dudes in the league.”

Abrines deflected praise for his big game to Westbrook, saying all he had to do was make open shots.

“The defense has two options — come in and help and leave me open or stay attached to me and (Westbrook) is going to get layups,” Abrines said. “Sometimes you just stay in the corner and wait for the pass to come.”

“Alex has to be ready to shoot the ball, he’s a shooter and he knows how to play the game of basketball,” Westbrook said.

Westbrook did his part, hurting the Hornets in transition, with pull-up jumpers and in pick and rolls, a few of which resulted in highlight reel dunks. He also helped limit Kemba Walker to 21 points.

The Thunder made a concerted effort to slow down Walker, who came in averaging 30 points per game. Walker failed to make a field goal before the break and had just three points, although the Hornets still led 48-44 at halftime.

Walker came to life in the third with 10 straight points to help the Hornets push their lead to 19.

Westbrook led the Thunder back.

With 1:12 left, he drove and found an open Dennis Schroder with a crosscourt pass for an open 3-pointer. After a Charlotte miss, Westbrook used a screen from Steven Adams to get by Michael Kidd-Gilchrist for a layup to push the lead to 108-102. Westbrook punctuated the win with a ferocious dunk with 13 seconds left off a fast break before stopping to glare at the crowd.

Hornets: Charlotte entered with 104 3-pointers, tied for the second most ever through eight games behind last season’s Golden State Warriors (107). … Marvin Williams now has 500 career blocks. … Tony Parker went down hard on his left elbow but remained in the game. Borrego said he is fine.

George had a rough night, shooting 4 of 20 from the field and finishing with 11 points. After the game, George revealed he’s been dealing with a peroneal nerve palsy or “dead foot.”

Thunder coach Billy Donovan joked he wasn’t giving away his strategy for slowing down Walker in the first half since they have to play the Hornets again.

“It was a collective team effort and we did a really good job,” Donovan said. “You have to do a good job in pick and roll coverage and you have to be persistent because he’s really shifty. He looks like he is giving up on the play and you bail out and there he goes.”

Westbrook got a technical foul early for screaming “and one” after a driving layup after the foul wasn’t called. He appeared not to like the call very much because on the next possession he split two Charlotte defenders and threw down a dunk.

It was Embiid’s sixth game already this season with at least 30 points and 10 rebounds.

Ben Simmons added 14 points and 11 assists, bouncing back nicely from one of his worst games as a pro. Markelle Fultz provided a spark late in the third quarter and finished with 12 points, nine rebounds and five assists while helping Philadelphia improve to 5-0 at home.

Lou Williams scored 26 points for the Clippers, and Danilo Gallinari had 25. Tobias Harris finished with 24 points.

Giannis Antetokounmpo returned to the lineup after missing one game while in the NBA’s concussion protocol and led Milwaukee with 33 points and 11 rebounds.

Buddy Hield scored 27 points and Nemanja Bjelica had 19. The Kings’ winning streak includes four straight against Eastern Conference teams, including the last three on the road.

Jeremy Lin scored 23 points for the Hawks. They have lost four straight.

The Nuggets won their third straight to improve to 7-1. On Wednesday night in Chicago, they beat the Bulls 108-107 in overtime on Millsap’s putback with 0.1 seconds left.

Jordan Clarkson led Cleveland with 17 points. The Cavaliers dropped to 1-7. They have split two games under “acting” coach Larry Drew.

Drew said negotiations with the team on restructuring his contract are “moving forward in a positive direction” but the sides have not reached an agreement.

Drew wants the team to re-work his deal if he’s going to take over for Tyronn Lue as the team’s interim coach during a rebuilding season. Lue was fired Sunday following a 0-6 start.

Before Thursday’s 110-91 loss to the Denver Nuggets, the 60-year-old Drew said the sides have made some progress.

Drew wants some guarantees from the Cavs as they get deeper into a rebuilding season. Cleveland fell to 1-7.

“Things are moving in the right direction,” Drew said, adding he spoke to his agent Andy Miller and feels good about the progress.

The Cavs are 10-2 over the past two seasons under Drew, who stepped in last season for Lue when the only coach in Cleveland to win a title since 1964 was battling health issues.

“Larry Drew is one of my favorite guys, favorite coaches, but I just don’t think it’s appropriate to comment on Koby and Larry Drew’s negotiations,” Gilbert said at a news conference to announce Cleveland’s selection to host the 2022 All-Star Game.

“It’s about guys getting better individually and it’s about guys getting better as a team,” he said. “I don’t want to be a distraction at all. It’s not about me. It’s about this organization, it’s about this team, it’s about the direction we want to do and how do we get there. I don’t want this thing to be about me. I want this thing to be about our guys and I want these guys to have fun playing again and smiling and high-fiving and running up and down the court and just feeling good about themselves.”

Biles, not at exquisite best, wins 4th all-around at…