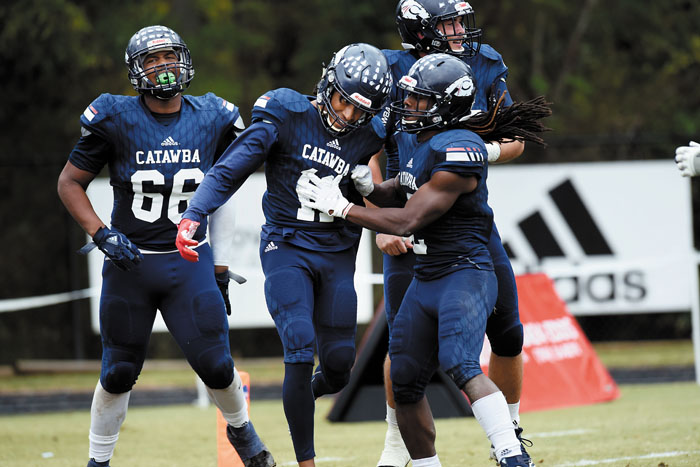 SALISBURY — Catawba head coach Curtis Walker raved about what receiver William Sweeper II was capable of doing for a while before it actually happened, but now Sweeper is excelling and making Catawba look very smart for recruiting him.

“I just wonder sometimes what might have been last year if Will had been healthy and we had him on one side and Sam Mobley on the other,” Walker said. “That’s what we had envisioned and it would’ve been hard to defend. Now we no longer have Sam, but Will is healthy, he’s a playmaker, and he’s showing everyone what he can do. We can put the ball up there for him and let him go get it.”

Out of uniform, Sweeper looks a bit smaller than his listed 6 feet, 185 pounds. He is exceptionally fast, but unlike some sprinters, he combines special wheels with terrific hands. He pulled in an acrobatic aerial catch in Saturday’s romp against Limestone. That was just the latest.

Sweeper’s 20 exciting receptions have produced 512 yards and six touchdowns. He averages an eye-popping 25.6 yards per catch. He’s turned in  two-TD games against Winston-Salem State and Wingate.  He topped 100 receiving yards against Mars Hill, Carson-Newman and Wingate.

“I’m not sure where it came from because my parents weren’t that fast, but I figured out I was fast in elementary school,” Sweeper said. “I was racing people every chance I got.”

He got involved in football early, at the Pop Warner age, but bigger kids dominated.

“I was always small and wasn’t that big of a factor,” Sweeper said. “By the time I got to high school, I was putting most of my energy into basketball.”

High school for Sweeper was 2,400-student Dutch Fork in Irmo, S.C., 11 miles from Columbia.  Coached by the legendary Tom Knotts, who currently owns three South Carolina State titles to go along with the seven he directed in North Carolina, the Dutch Fork Silver Foxes were annually in the hunt for a state title.

The Dutch Fork roster was always 130 strong. That was a daunting situation. As a junior in the fall of 2013, Sweeper didn’t play football. Dutch Fork, led by future Wake Forest running back Matt Colburn won the 4A state championship.

There were lots of holes to fill for the 2014 season, and Knotts talked Sweeper into playing his senior year. He was thin, but he turned out to be startlingly good — 41 catches for 701 yards and seven TDs — for a 12-3 squad that was ranked second in the state.

“Coach Knotts helped me after that and found me a place to play at Lackawanna College,” Sweeper said.

Lackawanna is a big-time junior college in Pennsylvania. There are a dozen coaches. Sweeper’s teammates committed to programs such as Oklahoma and Maryland, while he waited for the phone to ring. He didn’t have big numbers and wasn’t certain he’d get an offer, but then he got two on the same day, 20 minutes apart.

“Winston-Salem State called me, then Catawba called me,” Sweeper said. “Catawba stuck with me the most, showed me the most love. And one of my best friends from Dutch Fork, (safety) Jeremy Addison, was already at Catawba. That made everything fall into place to come here.”

Sweeper arrived on campus in the spring of 2017 with two years of eligibility. The Indians started grooming him for a major role.

He was everything they’d hope for, but then a serious hamstring injury set him back. He redshirted the 2017 season.

Sweeper showed he was healthy last spring. He made no impact at West Georgia in Catawba’s 2018 opener, but he’s consistently created problems for opponents since his breakout game at Winston-Salem State in Week 2.

“He goes hard to catch everything, and there’s a lot of speed to him,” said Catawba freshman quarterback Ken Avent III, the reigning SAC Player of the Week. “It’s kind of hard to overthrow someone like that, although I’ve still managed to do it a few times.”

In Avent’s four starts, Sweeper has 11 catches for 335 yards and three TDs. They’re developing chemistry and trust. Avent has done a fine job of spreading the ball around. Sweeper, back Kenyatta Greene, tight end Jourdan Osinskie and wideouts Devonte Tanksley and Dre Dunbar all have at least 16 catches and over 200 receiving yards.

“We try to get Sweeper and Osinskie on the same side of the field,” Ward said. “That makes it difficult to double-team both, and they’re giving us a lot of production when they’re single-covered.”

Some of the more interesting one-on-one football battles take place between receivers and defensive backs. There’s a lot of trash talk in those exchanges, but Walker said Sweeper has the right approach. He lets his legs do the talking.

“When the trash talk starts, some guys get emotional and wear their hearts on their sleeves,” Walker said. “That’s not Sweeper. He lets the trash talk fuel him, and he answers the chatter with his production.”