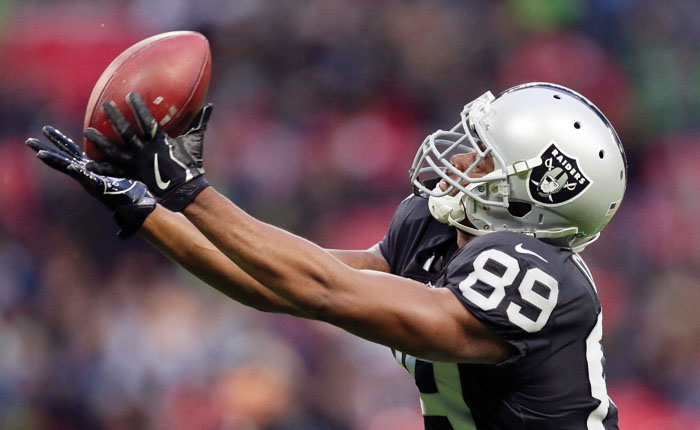 FILE - In this Oct. 14, 2018, file photo, Oakland Raiders wide receiver Amari Cooper (89) catches the ball during the warm-up before an NFL football game against Seattle Seahawks at Wembley stadium in London. The Dallas Cowboys have acquired Oakland receiver Amari Cooper for a first-round draft pick. Raiders general manager Reggie McKenzie said Monday, Oct. 22, 2018, his team will get the pick in the 2019 draft. (AP Photo/Tim Ireland, File)

By TIM DAHLBERG, AP Sports Columnist
Raiders quarterback Derek Carr tweeted Tuesday to, among other things, assure loyal fans he was fighting for their team and their city.
To which one user with twitchy Twitter fingers fired off a quick reply.
“Which city are you fighting back for, Oakland or Vegas?” he asked.
Hard to blame fans for their confusion. The Raiders are still playing in Oakland, have no home for next season and will be in Las Vegas on opening day 2020.
Still, no one told them in Oakland their team would be leaving well before the posted checkout time.
That’s pretty much what $100 million coach Jon Gruden and the Raiders have done in this, the most dismal of Raider seasons. The team is 1-5, and only games against the equally hapless 49ers and Cardinals figure to get in the way of securing the No. 1 pick in next year’s draft.
The team’s best player was sent to Chicago as the season began, and the best receiver packed his bags this week in a trade with the Dallas Cowboys. The remaining talent is spread thin, and there are worries Carr may not be the franchise quarterback he seemed to be just two years ago when he led Oakland to 12 wins and a berth in the playoffs.
Tanking? Well, not officially, because no team ever makes it official. But the Raiders are clearly stockpiling first round draft picks for the jackpot waiting in Las Vegas.
And Gruden and owner Mark Davis can’t wait to cash in.
The glittering new $1.9 billion stadium rising just off the Las Vegas Strip isn’t just a place for the Raiders to play. It’s a lifeline for a team that has long struggled to keep pace with other NFL teams who have owners with far deeper pockets.
And making a good first impression in Sin City is far more important than winning some of the few remaining games in Oakland.
Trading Amari Cooper to the Cowboys was simply another affirmation the Raiders under Gruden will be a far different team than the one he inherited this season. The team now has three first-round draft picks in 2019, and five total over the next two seasons.
That will allow Gruden to put the players he wants on the field, and make no mistake that these are his decisions, not those of general manager Reggie McKenzie. Davis is giving Gruden a free hand, and for $10 million a year expects him to deliver a winner in Las Vegas.
The move can’t come soon enough. Actually, this season can’t end soon enough.
Raider fans were shocked when instead of ending Khalil Mack’s holdout with a new contract, they traded him to the Bears. Then, after a lifeless performance by the team in London, the Cowboys came calling with the offer of a first-round pick for Cooper.
That’s two former first-round picks gone in the space of a few weeks. That’s also throwing away what could conceivably be the last season in Oakland for the Raiders.
It’s painful for Raider faithful. Just as painful, apparently, for Carr.
But it’s absolutely the right move. And, assuming Gruden can still coach in the league, it’s a gamble that should pay off in Vegas.
Davis has put all his chips in on the move to Las Vegas, and a city built on losers isn’t going to tolerate one for long. The Raiders need to make a splash to help justify the move, and need the buzz of a good team to make sure their tickets will be the toughest on the Strip.
That’s not totally a given, though all signs point to a long marriage between team and city.
The Raiders are already the most popular team in California. Imagine them as a regional powerhouse in Las Vegas, with thousands of fans clad in black and silver crowding the airport on game days.
That’s of little consolation to Oakland fans, who have cheered the team on for years. Many surely bought season tickets this year because they thought the Raiders had a chance to compete for a playoff spot at the very least.
Instead, the only competition the Raiders might win now is the one for the No. 1 pick in the draft next year.
The future of the Raiders is in Las Vegas, and in the next two drafts. A lot of questions about the team — and Gruden — will be answered by the time they kickoff in 2020 in a city the NFL shunned for so long.
The Raiders were always going to leave.
They’ve just done it a bit earlier than anyone expected.
____
AP Pro Football Writer Josh Dubow contributed.
____
Tim Dahlberg is a national sports columnist for The Associated Press. Write to him at tdahlberg@ap.org or http://twitter.com/timdahlberg