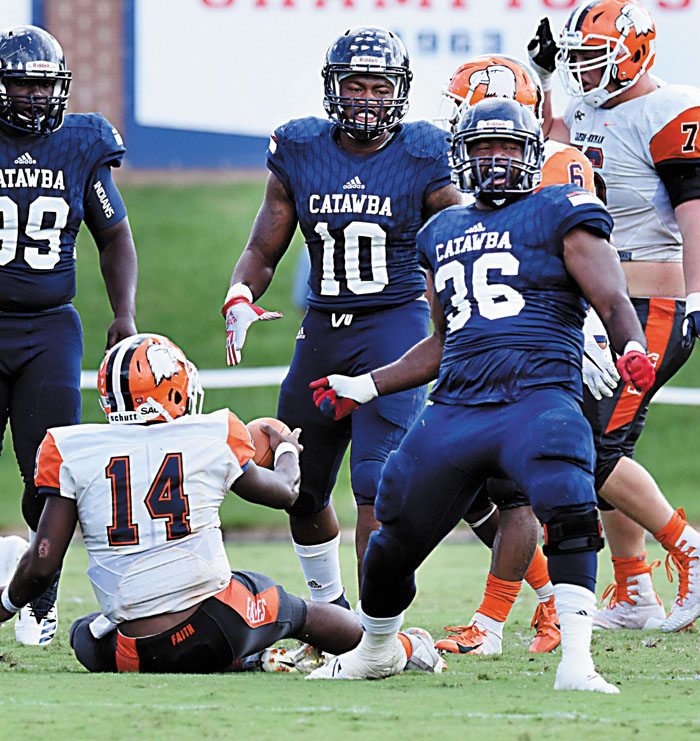 Wayne Hinshaw file photo/for the Salisbury Post ... Catawba defensive end Josh Smith (36) inspired his teammates with a halftime speech last Saturday, as the Indians turned a 23-7 deficit into a thrillling, 55-37 victory over Tusculum.

SALISBURY — It was halftime on Saturday afternoon at Shuford Stadium, and Catawba’s four-game losing streak appeared to be well on its way to becoming a five-game skid.

Prior to this sudden slide, in six years as Catawba’s head coach Curtis Walker had experienced only one three-game losing streak, and that was in 2013.

This was uncharted territory for a team that was 9-2 a year ago. Everyone was learning how to cope with consistently inconsistent play.

“And with every break going the other way,” said safety Jeremy Addison, shaking his head. “Mars Hill, Carson-Newman. We should’ve won those games.”

Exasperated coaches resisted the urge to punch holes in walls at halftime.  Catawba’s offense had possessed the ball nine times in the first half. Three of those possessions had ended in pure disaster — interceptions. Four more had just been ugly — three and out. More Indians had been problems than solutions.

Catawba had come up with two interceptions, one by Addison, but was down at the break, 23-7.  Still in the game, but barely.

Walker reminded his team it was still in the game in spite of everything.

Lineman Cameron Davis, who registered his sixth and seventh sacks of the season, did his best to fire up a beleaguered defense.

Jourdan Osinskie, Catawba’s outstanding tight end, had heard a pop in his ankle when he went down against Albany State on Oct. 6, another frustrating loss. Albany State players had chuckled at Osinskie as he was helped from the field, and that’s not the sort of thing you forget. He’d vowed to be back the next week for Wingate, but he hadn’t been able to go, and that was another discouraging setback.

But Osinskie had made it back for Tusculum, for homecoming, and he’d had more than enough of losing.

“Osinskie gave a pretty good speech,” Davis said. “We were down two touchdowns, but he said everything was in place for us to come back. Then (defensive end) Josh Smith started going crazy, and Josh has got a lot of energy. We were ready to play in the second half.”

The offense got the spark it desperately  needed when quarterback Ken Avent III broke a 41-yard run. It was Osinskie who caught the touchdown pass from Avent that made it 23-14. After Avent ran for a score and Lee Brackman kicked another extra point, that daunting 23-7 deficit was down to 23-21.

“It’s more fun for me personally to kick field goals,” Brackman said with a laugh. “But it’s a lot better for the team if I’m kicking extra points.”

Catawba fought and fought, but Tusculum is a good team, a team that was in the running for the South Atlantic Conference championship before Saturday. Heading to what would become a historic fourth quarter, the Pioneers led Catawba, 30-21.

Catawba took its first lead of the day at 35-30 on an electrifying 71-yard punt return by Kenyatta Greene with 9:55 remaining. It was timely. It also was Catawba’s first punt return TD in 16 seasons.

“I hadn’t run back a punt for a touchdown since high school,” Greene said. “You don’t get  many chances. They punt the ball away from you or out of bounds, or they pooch it or maybe they kick it very high. But they did give me a chance  this time and I wanted to help us win the game. When I caught that punt, there was a guy right in my face, but I made him miss. Addison made a block for me. Then I got another good block from (receiver) Anthony Stanley on the sideline.”

It became a footrace. Greene won’t be caught by many people.

With the Indians facing fourth-and-9 at their 16-yard line and the clock edging toward the five-minute mark, they had to punt. Brackman is normally just the placekicker, but he was sent in to punt. He crushed one — 58 yards, with no return — to flip the field.

On second-and-9 from its 27-yard-line, Tusculum dug deep in the playbook, a jet sweep with receiver Aaron Fudge going in motion and taking the flip.

“We knew they might run the jet off motion,” Addison said. “It was the fourth quarter and we hadn’t seen it all day, but we knew it was a possibility and we had repped it in practice. We were ready for it. I was responsible for the outside, and then the guy fumbled. At first, he got it back, but then he lost his grip, and I saw the ball on the ground. I triggered like we’re coached to do in those situations and I went for the scoop. I got a nice bounce. I had the ball in my hands, and when I looked around, there were nothing but blue jerseys.”

Addison’s fumble-return touchdown made him the SAC Defensive Player of the Week and put Catawba ahead, 42-37.

Two minutes later, Catawba safety Chris Thompson was headed to the end zone with a pick-six — 48-37.

Then linebacker L.J. Melvin — he’d also been hurt in the Albany State game — picked off a pass to set up a rushing touchdown by Green, the SAC’s  special teams player of the week, for the 55-37 final.

Catawba scored 34 points in the fourth quarter, with 20 in the last four minutes.

No precise data is kept on such unlikely things, but Catawba sports information director Jim Lewis is sure that Catawba has never had two defensive touchdowns, plus a special teams touchdown, in the same quarter.

The offense did its part. Catawba only had five offensive possessions in the second half but put up four TDs.

Greene was held to 42 rushing yards, but when you threw in his return and receiving yards, he had an extraordinary 254-yard day.

“It wasn’t exactly the way we drew it up, but after four weeks of nothing but defeats, it does feel very good to win,” Walker said. “I’m very proud of our young men that they stayed excited and continued to fight. Even when it was 23-7 at halftime, they never lost their enthusiasm or their belief in each other.”

It’s likely that 2-5 has never felt better. Davis, who had two sacks, said the mojo has returned for him and his teammates.

Walker talked about “a new season,” talked about winning the rest of them. There’s talk of finding a makeup date in November to play UNC Pembroke at Shuford Stadium to give the seniors back the home game they didn’t get to play. The week of Hurricane Florence, when the Sept. 15 UNC Pembroke game was washed out, was when this season took a terribly wrong turn for Catawba. The Indians didn’t recover from that detour until those last four minutes on Saturday.

Addison said practice on Monday wasn’t wild or crazy. There wasn’t much back-slapping, just guys getting back to work, preparing in business-like fashion for this Saturday’s 1:35 home game with Limestone.

“We’re happy we won, but we look at it like we went out and did what we’re supposed to do,” Addison said. “We just did our jobs, that’s all. The only thing difference was this time, the ball bounced our way. It finally bounced our way.”

Catawba will be heavily favored to make it two wins in a row against  Limestone (0-8), but it’s not like Walker is taking anything for granted, especially with the possibility of chilly, wet weather conditions.

“We hope there are more wins to come,” he said. “And we hope we won’t have to score 34 in the fourth quarter to get them.”