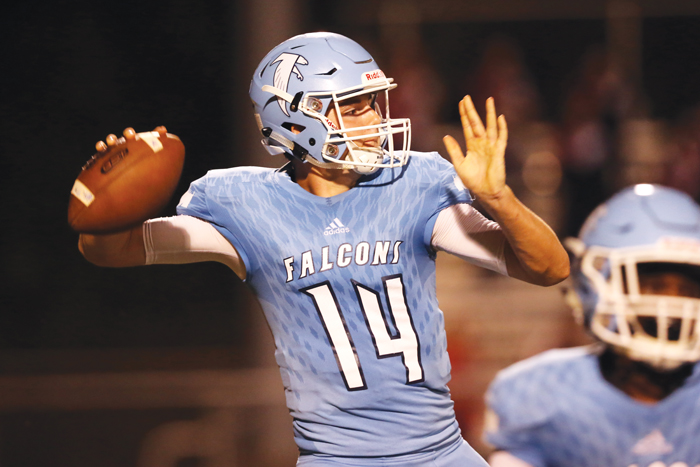 MOUNT ULLA — Anyone who stopped off at the concession stand on the way to their seat here Friday night probably missed the game’s first score.

On the first play from scrimmage, Perry bolted through a gaping hole, made a defender miss, then sprinted 74 yards for a touchdown. The opening kickoff took six seconds and Perry’s dash took just 11 more ticks off the clock.

“I saw the hole and nothing but green grass — and I just ran,” said the modest Perry, following the game.

Five minutes later, the West offensive line and Perry repeated the effort, this time for a 65-yard touchdown and a 14-0 lead.

“The offensive line did a great job, opened some big holes and it was easy to run,” added Perry. “I didn’t worry about how many yards I was getting, I just kept running. All the credit should go to the offensive line.”

The win for West (5-4), coupled with East Rowan’s win over South Iredell, brought the Falcons into a four-way tied for the North Piedmont Conference lead at 2-1 in league games.

The Falcons lost a heart-breaking, double-overtime thriller to South Iredell on Monday night, 48-41, after leading early, 21-3.

“After Monday’s night game, I’m just proud of the way our kids came out and played tonight,” said West head coach Joe Nixon. “We knew we didn’t play well Monday night, especially in the second half, so we decided to only worry about what we can control.

“We’ve got a good group of seniors,” Nixon continued. “We came in Tuesday and I was pouting and the players were pouting, but then we watched the film and went to work. No one was happy about Monday night and sometimes, it’s easier to come back and get ready to play after a bad performance.”

Boy, were the Falcons ready to play. The defense, led by linebacker Baiden Suddarth and a solid defensive line, smothered North Iredell (2-7) for most of the game, holding the Raiders to 89 total yards and no points.

On the ground, North managed just 12 yards on 19 carries. Starting quarterback Dylan Roy left injured in the second quarter and he and his replacement, Joe Gaither, combined for only 77 passing yards.

Coming into the game, the only drama was supposed to be when West’s senior quarterback, Payne Stolsworth, would break the school record for career touchdown passes. BJ Sherrill, an all-time West great, had 66 TD passes and Stolsworth entered Friday night’s game with 65.

Early on, Stolsworth may have been trying too hard. After Perry gave the Falcons the 14-0 lead, Stolsworth tried to zip a pass over the middle to star receiver Jalen Houston, but it went for a score the other way.

North safety Hunter Bolden stepped in and intercepted Stolsworth at the North 41-yard line and streaked 59 yards to the end zone. Suddenly, it was 14-7.

Houston “picked up” his quarterback on the next play — the ensuing kickoff. North kicker Frankie Barnes booted the kickoff to the speedy Houston, who returned it 75 yards for a another West touchdown — and a 21-7 advantage.

Stolsworth went for Houston again on the next series and Bolden intercepted again, this time at the North 11-yard line. Bolden’s return went for 28 yards, but that was all.

“I made one bad read and threw one too high, but my team had my back,” said Stolsworth.

The West defense forced a three-and-out and the Falcons’ offense then went on a three-TD spree before halftime.

Houston took a reverse and ran 36 yards for a score, then Stolsworth’s arm got hot. Stolsworth connected with Ty’kese Warren for 20 yards and then capped the nine-play drive with a 10-yard scoring toss to tight end Ben Bonds.

After TK Lark intercepted a North pass with under a minute left in the half, Stolsworth went back to work. In the final 21 seconds, Stolsworth hit Warren again for 25 yards to the Raiders’ 32-yard line and then as time expired, Houston caught a pass on the near sideline and then cut back into the middle of the field and eventually, into the end zone.

So Stolsworth had the new record (67) before halftime and didn’t throw a pass in the second half.

When Perry accounted for all 52 yards on West’s first series in the third quarter, including the last 14 for a TD, the running clock began at the 8:14 mark, with a 49-7 lead.

“We wanted to run the ball and get our confidence back up after losing that tough one on Monday night,” said Stolsworth. “You can’t take anybody lightly because any team can pop out and play well and beat you. We wanted to make sure that didn’t happen tonight. I wanted to get the record, but winning the game was the most important thing and the offensive line and Jaden (Perry) took care of that for us.”

Nixon, a former offensive lineman himself at Catawba, was obviously pleased with his team’s running attack — 368 yards on 37 carries.

“It was good see the OL play like that and we’ve challenged Perry about being hard to tackle because if he gets into the open field, he can really go,” said Nixon. “Those big holes like the line was making, especially early, that makes it easy on the running back.”

Nixon was also happy to get the touchdown passing record for his senior QB.

“Early on, Payne was pressing a little, with the record on the line, but it speaks volumes for him and the offensive players around him because that’s a team award,” said Nixon. “It takes the defense getting the ball back for the offense, it takes receivers like Kortez Weeks and the Houstons and others, the line blocking and Payne delivering a good throw. A lot of work has gone into it, unseen by a lot of people, and we’re proud of Payne for what he’s done. But ultimately, we’re more excited about getting the win tonight.”

NOTES: Perry rushed for 181 yards on Monday at South Iredell, giving him 459 for the week. … Stolsworth’s five completions netted 90 yards. … Houston followed Perry on the ground with 44 yards on just two carries. … In addition to Lark, KJ Hernandez and Reggie Everhart had pass interceptions for the West defense. … Suddarth had a fumble recovery. … West hosts Carson in another big NPC game next Friday.