Power in Partnership speaker talks about generations in the workplace 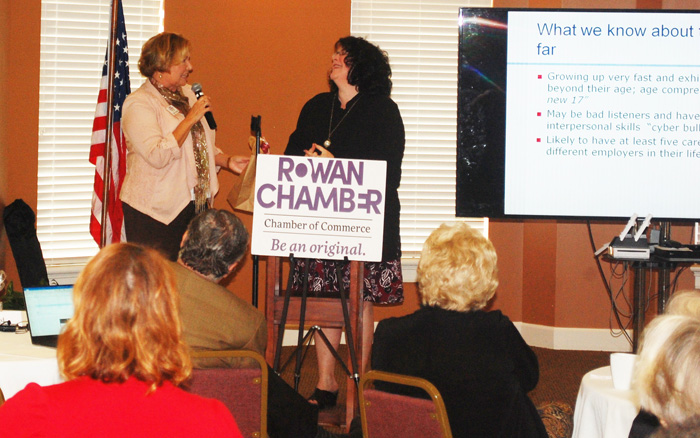 Rowan Chamber of Commerce Elaine Spalding thanks Karen Shearer Dunn, who spoke about intergenerational workplaces, at this month's Power in Partnership at Trinity Oaks on Oct. 18.

SALISBURY — Karen Shearer Dunn, a professor at Wingate University, compared people of different generations and how they interact in the workplace at the Rowan Chamber of Commerce Power in Partnership breakfast Thursday.

The breakfast was held at Trinity Oaks.

Dunn said understanding the characteristics of generations can help in the workplace.

As a personal example, she said her dad who’s in the “silent” generation got a tattoo of the logo of the company he worked for.

“Trust me, my dad’s name is Herb and he has white golf shoes,” Dunn said. “This is not a man who would get a tattoo. I said, ‘You got a tattoo?’ And he showed it to me and it was the Chevrolet emblem. I said to him, ‘Dad, you have branded yourself with the company logo.’ That is a loyalty that I could never do. I like Wingate a lot, but you’re not going to find a big ‘W’ on me anywhere.”

Baby boomers are into impression management, she said.

She said boomers are more likely to be interested in personal growth and read self-help and spirituality books.

Dunn is part of Generation X — generally, people born in the mid-1960s to early 1980s. They are likely to be more of a self-starter, she said.

Gen Xers are self-reliant and independent. They are self-determined — in other words, “I need to make it happen for me. If it’s going to happen, I can’t count on anyone else,” she said.

Millennials — generally, those born in the early ’80s through mid-’90s — are likely to want guidance, which can sometimes cause conflicts in the workplace, Dunn said.

She concluded with Generation Z — people born in the mid-’90s to early 2000s. She says their importance in the workforce will be determined by how fast they can find information instead of their own intelligence.

Dunn said she thinks the big differences among the generations is the way they are raised.

“A lot of times, I get asked how did the generations end up differently,” Dunn said. “A lot of different ways. A lot of things were going on, trends. One of the schools I subscribe to a lot is what was the parenting style that was predominate at that time when that generation was coming up? I think that has a huge influence on how the generations wound up sort of different.”

The next Power in Partnership breakfast will be Nov. 15 and will feature Frank Emory, chairman of North Carolina Economic Development Partnership.