What a relief: Dodgers next up for Brewers’ bullpen 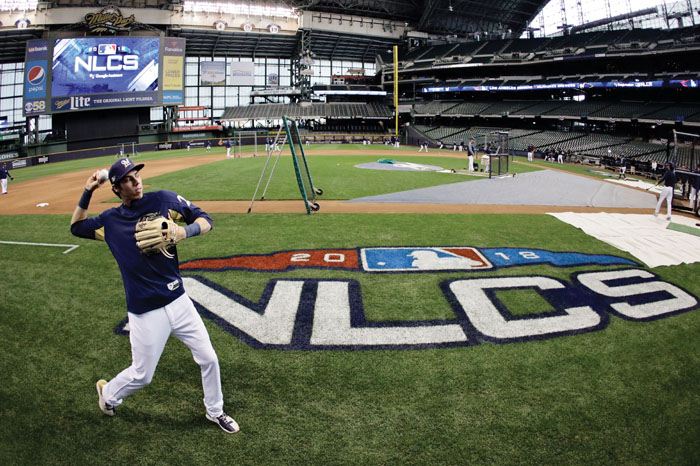 MILWAUKEE (AP) — Build an early lead, get five good innings out of the starter and bring in the bullpen.

The Milwaukee Brewers used that formula to win 11 straight games going into the NL Championship Series against the Los Angeles Dodgers.

Clayton Kershaw could be the ace that finally puts a stop to the streak.

The three-time NL Cy Young Award winner will start for Los Angeles in Game 1 on Friday night at Miller Park.

“We know we’re not going to get a ton of opportunities” against Kershaw and Dodgers starting pitching, outfielder Ryan Braun said. “So we’ve talked about the importance of cashing in on the opportunities we do get.”

Once the Brewers take a lead, they’re hard to beat. Good luck getting to their lights-out bullpen.

Milwaukee’s 3.47 ERA in relief was second in the NL only to the Chicago Cubs. The bullpen went 2-0 with a save and a 1.17 ERA in the three-game Division Series sweep Colorado.

Corey Knebel can come in as soon as the fifth, usually lights-out left-hander Josh Hader in just about situation and Jeremy Jeffress in the late innings. All three relievers are capable of closing.

Knebel and Hader are making their postseason debuts, while Jeffress’ playoff experience before this year was limited to just one inning in 2016 with Texas.

“I thought it was going to be a lot different,” Knebel said Thursday of the playoffs. “The first time I came in, I felt the same surprisingly. … Hey’s it’s just another game. That’s all it is. You just want to keep playing ball.”

The spotlight probably won’t faze the Dodgers, who are in a third straight NLCS for the first time in franchise history. The strategy at the plate doesn’t change, either, just because Milwaukee’s relievers are so good.

Knebel, Hader and Jeffress, along with righty Joakim Soria, appeared in all three games against Colorado spread out over four days.

The NLCS is best-of-seven, with the first four games over five days, so bullpen usage could differ.

“When you’re talking about a seven-game series,” Dodgers manager Dave Roberts said, “having those guys go to their ‘pen and taxing them and beating the starter, there’s still a lot of value in that.”

Chasing the starter will require building an early lead that might require the Brewers to dip into his bullpen earlier or more often than planned.

“If they go bullpen game, like they did against the Rockies, it’s a seven-game set,” Dodgers infielder Max Muncy said. “It’s more games you’re putting stress on the bullpen.”

Other notes and things to watch:

Pressure in the NLCS? Maybe not for the Dodgers, who lost Game 7 of the World Series to the Houston Astros a year ago. Now that’s pressure.

“We want to finish off what we didn’t finish off last year. That’s been their focus since after that Game 7,” Roberts said. “We’re in a position right now where we can give ourselves an opportunity to get back there.”

Outfielder Christian Yelich, making his postseason debut, hit .250 with a homer and two RBIs with two steals in the NLDS. The smooth-hitting left-hander went on a tear in the second half, hitting .367 after the All-Star break with 25 homers to help lift the Brewers to the NL Central crown.

When the series shifts to Dodger Stadium next week, the southern California native will be playing in a park where he used to watch games as a child .

No bullpen day to open up the series for the Brewers. Milwaukee is going with left-hander Gio Gonzalez to oppose Kershaw in Game 1 on Friday night. For Gonzalez, it has been quite a rebound since being acquired in a deal with the Washington Nationals, going 3-0 with a 2.13 ERA in five starts with Milwaukee.

“So to sit here, and I’m pitching Game 1 of the second round, I think it’s remarkable, pretty incredible,” Gonzalez said, “and hopefully I get to tell my kids about this one day.”

BACK WHERE IT STARTED

The NLCS will begin in the park where All-Star Manny Machado made his Dodgers’ debut. After Machado was acquired at the All-Star break from the Orioles, the Dodgers opened up the second half of the season at Miller Park.

“It made it a lot easier knowing I was just another piece to this ballclub,” Machado said. “This ballclub could have made it just as easily without me.”