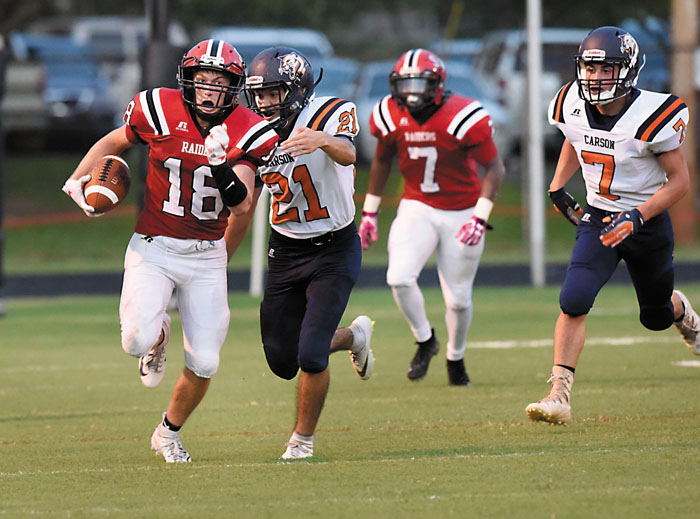 Wayne Hinshaw file photo/for the Salisbury Post ... South Rowan slot receiver Barrett Thompson (18) picks up yardage while be chased by Carson’s Juan Espinoza (21), during a game on Aug. 17. Thompson was a key player in the Raiders’ win last week against West Davidson.

Long story short — since the 2009 team went 9-3, South hasn’t won more than three games in a season. The most recent playoff victory came in 2003 when most of the current Raiders were in diapers.

Thompson, a sophomore, played at Mooresville Middle in the eighth grade and at Mooresville High as a freshman in the fall of 2017. He transferred to South Rowan last spring to finish his freshman year. A coaching staff eager to get some positive news was excited about a new football player arriving on campus.

“I know Marty Paxton (the former Mooresville head coach who is now at Concord),” South head coach Daniel Yow said. “I called him and asked him what he could tell me about Barrett. He said we were really going to like him, that he was an aggressive kid who would work hard.”

Moving from a Mooresville football program, where success is not unusual, to a school where success has been elusive, was something Thompson took in stride.

“Sure, some people told me South didn’t win,” Thompson said. “But all I could do was try to help them win.”

Thomas got reacquainted with players that he’d known as a seventh-grader, and he met new faces. His speed set him apart in practices and drills. It was clear that he’d be starting for the varsity as a sophomore.

“Most of the players I knew at Corriher-Lipe are on our jayvee team now,” Thompson said. “But I was accepted quickly by the varsity guys and got to know everyone. Coach (Jarrod) Smith helped me as far as learning the offense.”

South’s base offense is triple option out of shotgun formation, with one back and two slot receivers. Senior Cameron Hurd is the slot on the other side from Thompson. They are like bookends.

“They’re built alike and have the same sort of speed and elusiveness,” Yow said. “It’s hard to tell them apart.”

Thompson admits that Hurd is even quicker than he is, but he had opportunities to show what he brings to South’s offense in Friday’s 48-28 Central Carolina Conference win against West Davidson at Donnell Stadium.

Thompson hadn’t scored this season, but he had three touchdowns by halftime.

“It was all happening fast,” Thompson said. ” I was just living in the moment.”

He scored on a 29-yard run as the pitch man on an option play. He had a 10-yard scoring dash on an end around and followed it up with a 2-point conversion catch on a slant. In between the rushing TDs, he had a 19-yard scoring reception.

“I tried to run a sharp route, and Drew Huffman made a really nice pass,” Thompson said. “He’s a good quarterback. We’ve got some good skill athletes.”

After two critical West Davidson turnovers, South’s lead snowballed from 19-14 to 33-14 in the final minute of the first half.

The Raiders had huge momentum sprinting to the locker room.

“That was a good feeling to get that big lead at the half,” Thompson said. “West Davidson surprised us with their size. They looked pretty big on film, but then they were even bigger, in person, than what we expected. Big backs, big linemen, big linebackers.”

Thompson didn’t have any additional scores in the second half. He finished with three catches for 47 yards and threw good blocks in the running game.

“As far as blocking, I was usually just trying to get in the way of one of those linebackers,” Thompson said with a smile. “Michael Sloop ran the ball hard.”

It was win No. 2 for South, both at home and both in the CCC. At a school where three wins has been the peak over the last nine seasons, that’s exciting. There are still winnable games ahead. South plays at Thomasville Friday, a team with a fast, stout defense, but it’s a team South surprised last season.

“Friday’s win was a good one,” Thompson said. “We’re hoping it sparks us to a lot more.”