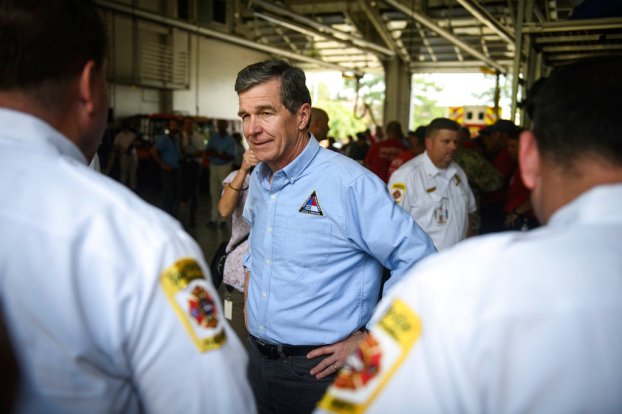 Office of the NC Governor

Gov. Cooper signed Executive Order No. 74, declaring a State of Emergency for 66 North Carolina counties. (Near Salisbury, they include David and Davidson counties, but not Rowan.) The order will be expanded to additional counties if needed.

The State of Emergency authorizes the use of state resources to help local governments respond to the storm. It is also a first step in requesting federal or state assistance to individuals and homeowners if needed. In addition, it activates the state law against price gouging, or charging too much during a time of emergency.

Today, Gov. Cooper also signed Executive Order No. 75, temporarily waiving the cap on maximum hours of service restrictions for trucks and heavy vehicles traveling in and through North Carolina and size and weight restrictions for trucks. The order will help farmers harvest and transport their crops and livestock more quickly ahead of the storm. It can also help storm response vehicles and equipment moving into or through the state.

Hurricane Michael is expected to make landfall along the Florida panhandle today before curving across Georgia, South Carolina and North Carolina.

Parts of North Carolina still reeling from Hurricane Florence could see sustained tropical storm force winds from Michael. Winds will be strong enough to bring down trees weakened by Florence and to rip tarps from roofs of Florence-damaged homes.

Rain will increase across the state today with the hardest rain expected Thursday and Thursday night. Rain will fall statewide, and as much as 7 inches of rain could fall in some areas of central North Carolina.

Heavy rain could cause flash flooding and river flooding.  Cooper cautioned people who live in flood-prone areas to keep a close eye on the forecast and to be ready to evacuate if asked to.

Cooper said state emergency management officials are working with local and federal counterparts to prepare North Carolina for possible impacts from Michael. Gov. Cooper has activated 150 National Guard troops who will report for duty this afternoon. He also urged North Carolinians to take steps to prepare their families.

“The last thing people cleaning up from Florence need right now is more wind and rain. But this storm is coming, and we will be ready for it,” Gov. Cooper said.

NC Emergency Management shared the following tips for preparing for the storm:

Additional storm safety tips can be found on the free ReadyNC mobile app or online at readync.org.