Jack Neubacher was always a part of the airport 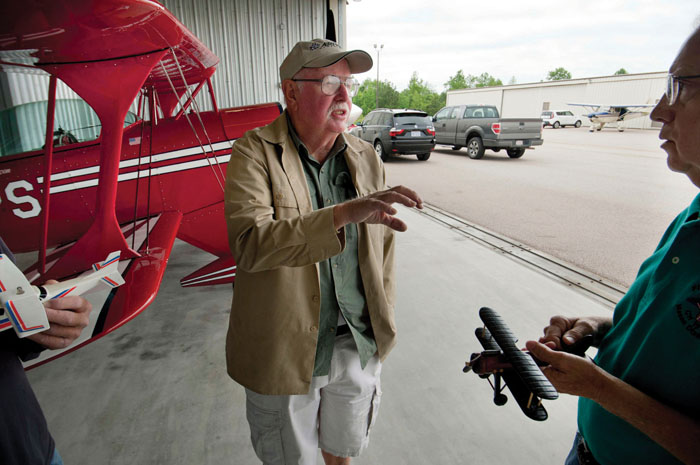 SALISBURY — Monday afternoon, the EAA hangar at Mid-Carolina Regional Airport was the center of shared stories — mostly humorous — and fond memories of a man dear friends remembered as the driving force behind their organization since the early 1990s.

In fact, the Experimental Aircraft Association at Rowan County’s airport came to be because of Jack Neubacher, just as so many other things did afterward.

Neubacher died at his home Sunday.

He grew up in Geneva, Ohio, and went on to serve as a radar operator for the Navy in Vietnam. He later came to Salisbury and worked for Lane Punch Corp. His career there included time in Monterrey, Mexico, to help start a factory.

It was back in Salisbury and Rowan County where Neubacher began to forge a legacy. No one could remember a time that he was not around the airport. In about 1990, he became president of the Rowan Pilots Association, which eventually became the EAA. One of the nation’s most successful chapters, Rowan’s still has about 100 members, of which 40 are active.

“Jack was the glue that held us together even then, and it was still that way,” Wade Myers said. “He was one of the last few remaining charter members. In the beginning, we thought the EAA was doctors and lawyers, not just the common rabble that we were. But we made it work.”

Always a fan of introducing youths to aviation, Neubacher helped start the Young Eagle program, allowing more than 4,000 kids to get free flights. Of those, he gave out 117 on his own. He also headed the Ascend program, an annual weeklong camp that exposed teenagers to the opportunities of careers in aviation.

“Jack would always ask us what projects we wanted to do each year,” said Lewis Brown “He would get a lot of blank stares and not much input. So Jack started making a schedule and presenting it to the group. Nobody would disagree, and pretty soon the schedule was adopted.

“But Jack would take it further. He would put out a sign-up sheet, and almost nobody would put their names on it. But Jack would always be there and make sure the details would be handled, and then the membership would turn out with more than enough needed to help. Even the few times that Jack couldn’t be here, he made sure that everything was ready ahead of time.”

“The EAA used to have a food booth at the fair for a fundraiser,” said Joyce Wood. “The food booth was a wreck, we had to pass a health inspection and we had to stay late every night. Pretty soon, Jack got us started doing fly-in breakfasts and lunches after he reminded the other flying clubs, and we made more money that way. Just about every year, Jack would call and laugh as he reminded we were not doing the food booth anymore.”

Neubacher was a fixture on the early morning WBT radio outdoor shows when he called in to list places for pilots to get fly-in meals. On one of the fly-in days for Salisbury, he told Dusty Mills to expect maybe just a few planes. It got close to 60 at an airport barely capable of refueling so many.

More than one humorous story was shared about Neubacher.

“Once Jack needed fuel in Baxley, Georgia, and when he filled the tank, he forgot to replace the cap,” said Mike Brown. “Without the cap, the fuel started getting sucked out, and Jack knew he had to land soon. He landed the plane on a highway and taxied to a lumber yard while flashing his lights at traffic to give him room.

“The cops showed up, fixed him up with gas and found a gas cap off an old tractor, then blocked the highway for Jack’s takeoff. He didn’t forget the gas cap again.”

Neubacher owned and continued to fly a 1956 Piper Tri Pacer after becoming a pilot at age 16.

Mills remembered making more than a few flights with him to Causey’s Airport and Fran’s Front Porch in Liberty for fried chicken and banana pudding.

“I was Army, he was Navy, and we always talked about the Army/Navy game,” Mills said. “Jack loved to promote aviation, and his heart was service. He was always here, and he often knew how he could help before we asked him. He was a great friend for more than 20 years, and we will miss him.”

“He meant so much to so many and will be greatly missed by those fortunate enough to have met him,” Howell said. “Jack was a mentor for our youth, a quiet leader for his peers, and was salt-of-the-earth pure. He will be remembered for his quick wit and selfless approach to life.”

“There are so many success stories related to Jack that touch many,” Davis said. “His impact on aviation far exceeds this small airport.”

Tanya Logan added, “Jack knew how to cut through the red tape on our airport advisory board.”

“Jack was proud of his service and got us started doing the Pledge of Allegiance at our meetings,” Brown said. “It will take a large group to try to re-create his list of contacts. Jack was a well-respected aviation writer for Southern Aviator.”

In recent years, Neubacher, always a family man, was crew chief for his grandson Benjamin’s quarter midget racing efforts. Jack and his wife, Diane, enjoyed traveling with Benjamin and daughter Jennifer to races near and far. This past year, they traveled to Indianapolis Motor Speedway to race.

Neubacher was commissioner of the North Carolina Quarter Midget Speedway in Salisbury. He also left behind a son, Marcus.

They will all miss Jack Neubacher.

“I never had a real brother,” Mike Brown said. “But from this, I know what it’s like to have one die. All of us do.”