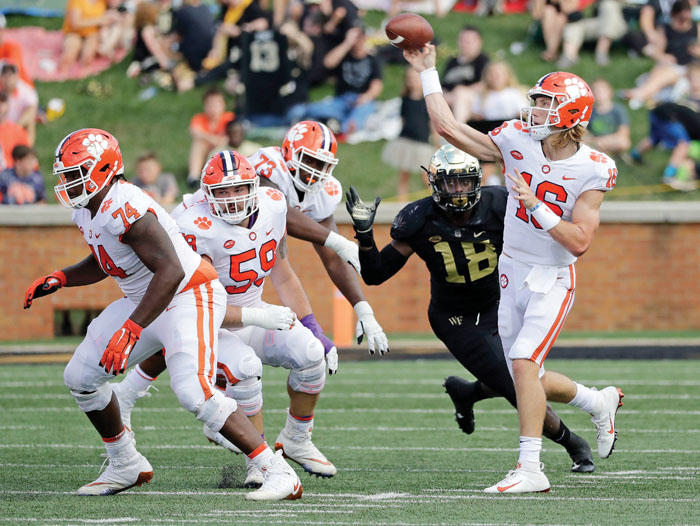 Three Tigers had at least 100 yards rushing, the first time they’ve done that since 2006.

Trevor Lawrence was 20 of 25 for 175 yards with a 55-yard touchdown pass to Justyn Ross and a 20-yarder to Tee Higgins in about 2 1/2 quarters before leaving with the score out of hand. This was the freshman’s second start, and first on the road. They helped the Tigers (6-0, 3-0 Atlantic Coast Conference) open with six victories for the fourth straight year. In each of the previous three seasons they did it, they won the ACC and reached the College Football Playoff.

MIAMI GARDENS, Fla. (AP) — N’Kosi Perry threw four touchdown passes, and Miami pulled off its biggest comeback ever against Florida State by rallying from 20 points down.

Brevin Jordan’s 41-yard touchdown grab with just under 12 minutes left put the Hurricanes (5-1, 2-0 Atlantic Coast Conference) ahead for good, as Miami rallied from a 27-7 second-half deficit.

The win was Miami’s first at home over Florida State (3-3, 1-3) since 2004, snapping a six-game slide in South Florida against its archrival.

FAYETTEVILLE, Ark. (AP) — Tua Tagovailoa passed for 334 yards and four touchdowns and Alabama ran its winning streak against Arkansas to 12.

It took just one play for Alabama (6-0, 3-0 Southeastern Conference) to set the tone as Tagovailoa hit tight end Irv Smith Jr. on a pass across the middle that Smith took 76 yards to the end zone and a 7-0 lead just 21 seconds into the game.

On the Crimson Tide’s second possession, Tagovailoa hit Smith again, and the 6-foot-4 junior ripped off another big gain before he was stripped from behind by Ryan Pulley. Alabama receiver Henry Ruggs III picked up the fumble in stride and carried it the remaining 12 yards for a touchdown and a 14-0 lead with 10:01 left in the first quarter. The margin grew to 21-0 before Arkansas (1-5, 0-3) got on the scoreboard.

Georgia (6-0, 4-0 Southeastern Conference) trailed for the first time this season following the first of two first-half field goals by Vanderbilt’s Ryle Guay less than five minutes into the game.

Fromm threw for a season-high 276 yards while sitting out the final quarter. After Vanderbilt took the 3-0 lead, Fromm needed only 15 seconds to respond with the long scoring pass to Godwin, who fought off cornerback Joejuan Williams’ tackle attempt.

A week after a gritty victory at Penn State, the Buckeyes (6-0, 3-0 Big Ten) were forced to work hard by quarterback Peyton Ramsey and an Indiana offense that took advantage of plenty of early defensive mistakes. The Buckeyes didn’t get a handle on this one until Haskins hooked up with Terry McLaurin for a 17-yard touchdown pass early in the fourth, and then added a 30-yard scoring pass to Binjimen Victor with seven minutes left.

GAINESVILLE, Fla. (AP) — Lamical Perine scored twice on short runs, including one after a trick play in the fourth quarter, and Florida beat LSU.

Brad Stewart’s 25-yard interception return for a touchdown — the first pick Joe Burrow has thrown this season — essentially sealed the victory for the Gators (5-1, 3-1 Southeastern Conference).

Florida scored all its points after 2007 Heisman Trophy winner Tim Tebow became the sixth player to be inducted into the school’s ring of honor. With Tebow watching much of the game from the sideline, Florida looked a little like a championship contender.

A week after Florida beat Mississippi State with a double pass, Feleipe Franks handed off to seldom-used tight end Lucas Krull, slipped around the right end mostly unnoticed and caught a 15-yard pass from Krull that set up Perine’s second score.

It immediately followed LSU’s go-ahead drive that featured two long runs from Nick Brossettte. Brossette ran for 79 yards on the drive, including a 2-yard plunge that put the Tigers (5-1, 2-1) up 19-14 with 8:48 to play.

The Irish (6-0) had minus-5 rushing yards and were facing second-and-12 from their own 3 when Williams took a handoff into the left side of the line and broke into the clear early in the third quarter, putting Notre Dame ahead 24-16. Williams had just been thrown for a 2-yard loss, prompting the sellout crowd at Lane Stadium to grow louder, begging for the kind of big play the program’s defense has made so often. Instead, it was Williams who made it. He added TD runs of 1 and 31 yards.

The Irish’s defense was stout, too. Khalid Kareem stripped quarterback Ryan Willis on a scramble and Julian Love was in perfect position to scoop up the bouncing fumble and take it 42 yards for a touchdown, giving Notre Dame a 17-9 lead late in the second quarter.

Before breaking the game open, Notre Dame also sacked Willis for 11 yards after Virginia Tech (3-2) drove to the 19, and stopped the Hokies on three tries from the 1. Both of those drives ended with the hosts settling for field goals by Brian Johnson.

West Virginia (5-0, 3-0 Big 12) has won its first five games for the second time in three seasons. The Mountaineers had no trouble moving the ball but Grier’s efforts to throw into tight coverage near the goal line cost his team plenty of points. The Heisman Trophy hopeful was intercepted three times in the first half either in the end zone or at the goal line, two of them by cornerback Hasan Defense. All three of Grier’s interceptions occurred when West Virginia had driven inside the Kansas 15-yard line.

Kansas (2-4, 0-3) entered the game leading the Big 12 with eight interceptions, including three returned for touchdowns. Grier also had a third-quarter fumble on a scramble. West Virginia had committed six total turnovers in its previous four games.

The Huskies led 24-7 at halftime but saw the Bruins climb back within a touchdown twice in the fourth quarter. Washington took a 31-17 lead with a 12-play, 81-yard drive that took 6:45 off the clock and ended with Gaskin’s 1-yard TD on a direct snap with 3:42 remaining.

Joshua Kelley scored on a 2-yard run with 1:38 left, and the Bruins attempted an onside kick, but Washington recovered and ran out the clock.

Browning completed 18 of 26 passes with one TD and one interception. The senior also ran for a score as Washington (5-1, 3-0 Pac-12) won in its first trip to the Rose Bowl in five years.

Adrian Killins rushed for 113 yards and a TD for the Knights (5-0, 2-0), one of three unbeaten teams remaining in the American Athletic Conference, along with Cincinnati and South Florida.

Milton completed 18 of 34 passes with one interception after accounting for 12 touchdowns — seven passing and five rushing — in nonconference victories over Florida Atlantic and Pittsburgh the previous two weeks. The junior from Kapolei, Hawaii, tossed TD passes of 14 yards to Dredrick Snelson in the first quarter and 30 yards to Tre Nixon on the first play of the fourth quarter.

The Knights also got two TD runs from Otis Anderson and one from Trysten Hill, a 315-pound defensive tackle who lined up as a fullback before plowing into the end zone on fourth-and-1 and drawing an unsportsmanlike conduct penalty for spiking the ball. Ben Hicks came off the bench to replace freshman quarterback William Brown for SMU (2-4, 1-1).

COLLEGE STATION, Texas (AP) — Trayveon Williams flipped into the end zone on a 10-yard run in overtime to give Texas A&M the victory over Kentucky.

The Wildcats’ Miles Butler missed a 43-yard field goal to start overtime, with the ball bouncing back off the crossbar, and the Aggies capitalized with Williams’ touchdown run four plays later.

The Aggies (4-2, 2-1 Southeastern Conference) appeared to be in control and were trying to drain the clock when Mond fumbled, and safety Darius West scooped up the ball and returned it 40 yards for a touchdown to it at 14 with 4:17 remaining.

Texas A&M took a 14-7 lead early in the fourth quarter when Kellen Mond tried throwing underneath to Camron Buckley. The ball glanced off of Buckley’s hands and right into those of tight end Jace Sternberger, who scooted 46 yards up the middle for a go-ahead touchdown.

The Aggies snapped a six-game losing streak to Associated Press Top 25 opponents, including losses this season to top-ranked Alabama and then-No. 2 Clemson.

The Wolverines (5-1, 3-0 Big Ten) fell behind late in the first quarter and didn’t take the lead again until midway through the second quarter. They scored 24 straight points to take control and added another TD and two-point conversion with 6:37 remaining to seal their fifth straight victory.

The Terrapins (3-2, 1-1) went ahead on Ty Johnson’s 98-yard kickoff return with 1:10 left in the first half, but they didn’t score again until early in the fourth quarter. Patterson completed 19 of 27 passes and had one interception, a pass that went off tight end Zach Gentry’s hands.

Nebraska’s offense flashed big-play promise behind their freshman quarterback, who threw for 384 yards and rushed for a score. JD Spielman had nine catches for 209 yards, including a 75-yard touchdown catch.

It still wasn’t enough to prevent the Cornhuskers (0-5, 0-3) from losing their ninth straight game, extending a program record.  Nebraska was flagged 10 times for 100 yards. Martinez fumbled in the third quarter, a turnover that Wisconsin cashed in for a 20-yard touchdown run from Taiwan Deal for a 24-point lead with 6:50 left in the third quarter.

The Spartans (3-2, 1-1 Big Ten) entered with the nation’s top-ranked run defense and held Northwestern (2-3, 2-1) to 8 yards on the ground, but it didn’t matter. The Wildcats moved the ball consistently well through the air, and Michigan State’s offense was mostly inept.

Thorson threw a 21-yard scoring pass to Cameron Green with 15 seconds left in the third, and a 2-point conversion gave Northwestern a 22-19 lead.

The Wildcats missed a field goal with 6:41 to play, but Michigan State went 15 yards backward on the ensuing possession and had to punt. The Spartans held again defensively, and on the next possession, they had second-and-1 from their own 11. After two near-sacks, running back Connor Heyward was stopped on fourth down. Thorson scored on a 2-yard run to make it a 10-point game with 2:51 left.

The Buffaloes (5-0, 2-0 Pac-12) overcame the ejection of star linebacker Nate Landman in the second quarter and stifled Arizona State running back Eno Benjamin in the second half.

Benjamin, who set a school record a week ago with 312 yards against Oregon State, finished with 120 yards and two touchdowns. But he managed just 23 yards after halftime.

Shenault scored on a pair of 1-yard runs off direct snaps and caught TD passes of 3 and 30 yards from Steven Montez, who threw for 328 yards. Shenault caught 13 passes for 127 yards and ran five times for 13 yards. The Sun Devils (3-3, 1-2) are still looking for their first road win under new coach Herm Edwards.

RALEIGH, N.C. (AP) — Reggie Gallaspy ran for a career-best 104 yards and two touchdowns and North Carolina State held on after squandering most of a big second-half lead.

Ryan Finley threw for two touchdowns for the Wolfpack (5-0, 2-0 Atlantic Coast Conference), which led 28-3 on Finley’s scoring strike to Kelvin Harmon with 2:57 left in the third. But the Eagles (4-2, 1-1) responded with 20 straight points, including a blocked punt return for a score with 3:33 left.

Finley made the clinching play, connecting with Stephen Louis on the right sideline for 21 yards on a third down to move the chains with 1:08 left and send the Wolfpack into kneel-down mode. The Wolfpack won despite committing four turnovers and having a blocked field goal to go with the blocked punt.

Purdy, a true freshman who played just one series before this game, stepped in for Zeb Noland — who was starting his fourth straight game in place of injured starter Kyle Kempt — in the contest’s second series and immediately sparked Iowa State (2-3, 1-2 Big 12). He also had a rushing touchdown.

With Iowa State missing leading rusher David Montgomery because of an upper body injury, Purdy also led the Cyclones in rushing. He had 84 yards, including a 29-yard TD run, on 19 carries.