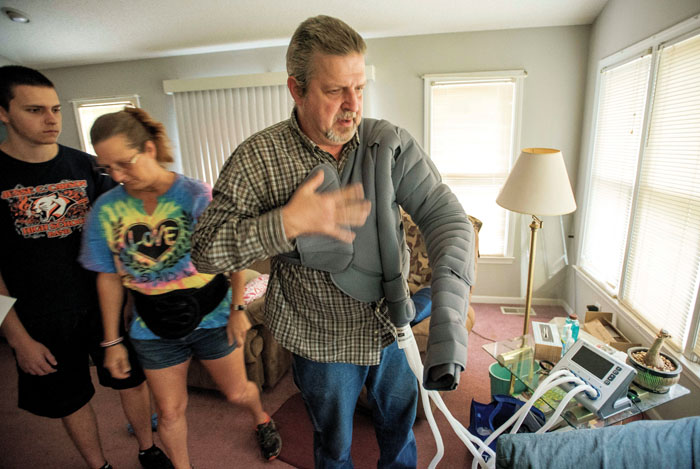 Scott Brady puts on his lymphatic pump jacket that takes the place of lymph nodes in his left armpit that were removed as part of his treatment for breast cancer. Jon C. Lakey/Salisbury Post

SALISBURY — Things in general are looking up for Scott Brady.

He still gets tired and feels weak by late afternoon, with many days filled with chemotherapy, radiation and doctor’s appointments. He is able to go outside when he feels up to it and looks forward to being more active.

Meanwhile, one of the most successful annual fundraisers in the area, Grace Lutheran Church’s fish fry, is gearing up to help him Oct. 13.

Brady’s world began to change when he noticed what seemed like a pimple or a whitehead on his left nipple. The swelling got larger and — aware that self-examination is important for men with breast or other cancers in their family history — he went to his doctor on May 16, 2017. The doctor waved off the concern and suggested male hormone change as the culprit, according to Brady.

Just a week later, Brady lost his job with a major bank and was unemployed from May through Nov. 21, 2017. With the growth getting worse, he went for a biopsy on Dec. 20.

On Jan. 2 of this year, he was diagnosed with Stage 2B invasive ductile carcinoma, or male breast cancer, which had metastasized into his underarm lymph nodes. A PET scan upgraded the cancer to Stage 3C based on the location and size of the tumors, according to Brady’s fiancee, Kristie Joyner.

Aggressive treatment began Jan. 11, following a Sloan Kettering Cancer Institute protocol. Brady says doctors rated his chance of getting this particular cancer at about a 10th of 1 percent. He and his oncologist decided on an aggressive approach.

Brady says he told the doctor, “Hit me with everything I need; I know that it will be very hard.”

“For several weeks, Scott could not sleep more than an hour a night,” Joyner says.

It’s been a tough year.

“I turned 51, and two weeks later, life as I knew it stopped,” Brady says. “I lost another job on March 26, which left me without insurance at the time I needed it most. No short- or long-term disability, either.”

A port catheter has made the chemo easier. Joyner says intravenous injections were likely to damage Brady’s veins, and the port is easier to use.

“It is now a part of everyday life,” Brady says. “In five or six years, once we are past all of this, the port can come out. It has all just been a blur.”

Brady had a mastectomy of the left breast on July 6. To prevent lymphedema, he soon began using a lymphatic pump as a sleeve over his left arm. The use of the lymphatic pump will continue for the rest of his life.

Joyner initially learned to massage the arm and shoulder, but the pump now does the work over about 60 minutes daily. Brady will forever be limited to lifting no more than 20 pounds with his left arm.

Brady was an electrician for 24 years and worked in facilities maintenance until his cancer surgery.

“I always felt independent and in control,” he says. “But this thing has humbled me. Prior to the cancer, I had Tylenol and ibuprofen. Now I have a pill for everything.”

The chemo can bring on nausea, numbness, cold, heat and chest pains, he says.

“I never know which I will get. I wonder which is worse, the sickness or the cure.”

Although the side effects are harsh, the aggressive treatment is working, with all tumors showing gradual improvement, Brady says. He credits oncologist James Wall and surgeon Richard White, both associated with Levine Cancer Institute in Concord, for wonderful care. He is currently on COBRA insurance funded by the hospital.

Lingering in Brady’s mind is the high likelihood that his cancer could return, in the other breast. Men’s health insurance doesn’t cover the preventative mastectomy that women often choose.

“We made it this far with a team approach, and we’ll continue to do that,” says his son Cameron, 18. Also on Brady’s team is his daughter, Allison, 23.

With an eye to the future, Brady says he wants to help others when all this is said and done. He is bothered by all the patients he and Joyner see at the hospital who have no one.

“Once I am cured, I can volunteer there,” he says. “I have thought of penning a book on cancer inspiration. My dream is to become a missionary and travel overseas. And I look forward to getting our band back together.”

That would be the KISS tribute band he has headed since learning to play the bass guitar in his 40s.

Grace Lutheran Church chose Brady to honor with its 10th annual fish fry Oct. 13. He will be the recipient of proceeds that have netted $300,000 over the previous nine years.

The fish fry kicks off with a tractor show in the parking lot from 10 a.m. to 2 p.m., with food available. On hand will be plenty of local farmers and the tractors they are proud of.

Several things are new this year. A live auction with Dennis Weddington, different from previous formats, will be from 11 a.m. to 4 p.m. or until all donated items are auctioned off.

Novant Health’s Mammogram Bus will be on site from noon to 4 p.m., and women and men are encouraged to visit the bus for more information about breast screenings. The bus appearance coincides with Breast Cancer Awareness Month.

The Fire Safety House, offered by the Kannapolis Fire Department, will provide practice for children and adults on what to do during a fire or bad-weather emergency.

The serving of freshly fried fish kicks off at 4 p.m. Guests can eat in, carry out, drive through or take advantage of free shuttle service from remote parking. Live music will be provided by 2 Girls and a Mic. People are encouraged to bring chairs to enjoy the fellowship and dancing after supper.

Tickets for fish plates are $10 for adults and $5 for children, who can also get hot dog plates. Tickets can be purchased Oct. 13 at the church at 3020 Grace Church Road.

A basket raffle goes all day and often includes a collection of items such as gift cards, children’s toys, home decor and sports team memorabilia. Premium raffle items (requiring a different color ticket) might include a gun, custom-made knife, or gun safe.

Tickets can be purchased at the event for as little as $1 per ticket. The raffle drawing is at the end of the evening. You do not have to be present to win.

“The fish fry brings us together as a church and community, said Chairman Mike Yost. “It’s not about being a Lutheran or other denomination. It’s a God thing; you give and you will receive.”

Scott Brady, who once attended Grace Lutheran, hopes to be on hand all day.

“It’s been quite a ride,” Brady says. “I’m certainly humbled by all this. I will have one heck of a testimony.”