High school seniors use tennis tournament to give back to community 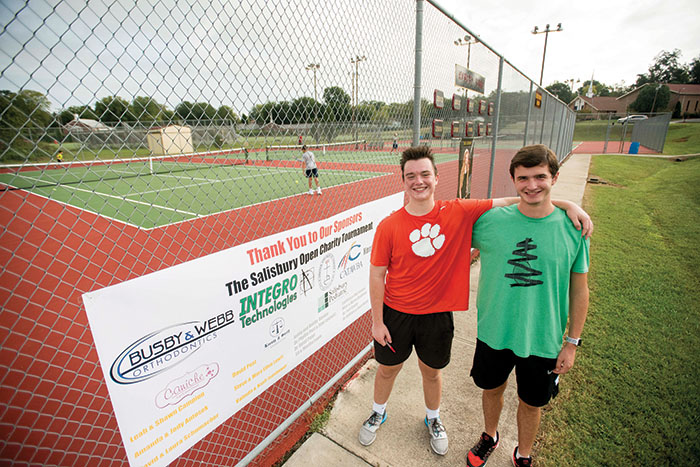 JON C. LAKEY / SALISBURY POST Salisbury high school seniors Blake Clark (left) and Roarke Burton wanted to host a local charitable event before they graduated and moved on with their next phase of life. Blake and Roarke decided to do a charity tennis tournament to raise money for the Salisbury High school tennis team and the Hemby Children's Hospital in honor of Salisbury high freshman Colin Donaldson who recently completed treatments for Burkitt's Lymphoma. The tennis tournament was held this past Saturday. . Salisbury, NC. 9/29/18

This past weekend’s Salisbury Open Charity Tennis Tournament was the idea of Roarke Burton and Blake Clark, two Salisbury High School seniors and best friends. Burton said, “We wanted to do something for our community. We sat down in July, talked some ideas out and decided to host a tennis tournament. We wanted 50 percent of our proceeds to benefit Salisbury High School tennis programs, including some new equipment, a wind screen and benches.”

Clark added, “I was a member of and eventually president of the Overton Elementary Student Council. This group is near to my heart and we decided to give them 25 percent of proceeds and the remaining 25 percent to Hemby Children’s Hospital which had treated our friend, Colin Donaldson, in his successful battle against Burkitt’s Lymphoma. There was no cost to Colin’s family for the treatment. Hemby is an affiliate of St. Jude’s Hospital in Charlotte.”

With their recipients in mind, Burton and Clark established dates and locations just ahead of procuring sponsorships. Burton said, “We set our sponsorship goal high and got tips from local entrepreneurs Greg Alcorn and Shawn Campion. When we started to make our visits, we gained confidence especially as the commitments came in.”

“We made appointments with each potential sponsor, then talked to them face to face. We were turned down by very few. It became exciting as our sponsorship total grew,” said Clark. The boys secured $10,000 in sponsorships and hoped for another $1,000 in registration fees. Primary sponsors included Busby and Webb, Integro, Mid-South Tractor, Salisbury Pediatrics and Caniche.

Play continued from Friday afternoon through Sunday with awards in open and age group singles, doubles and mixed doubles. Karen Lewis, a veteran tennis USTA and college tennis official, came from Concord to play singles and mixed doubles with her husband, Larry. Lewis said, “We often are working tournaments on the weekend but this one was nearby and we decided to play. I don’t get to play as often as I like. I’m 66 and had to play two 14-year-olds already, Sophia Chmiel and Abby Campion. ‘Oh crap!’ were the first words out of my mouth. I have grandchildren their age but I won a few games and we had fun.”

Burton and Clark both hope to attend the University of North Carolina at Chapel Hill where Clark plans a business degree and Burton will study pre-med. They intend to pass the tournament on to their siblings, Meredith Burton and Bennett Clark. Meredith Burton, a sophomore Salisbury High tennis player, said, “Of course, we’re doing this for Salisbury and the local community really supported this year’s event. The sponsors and players made it a huge success. I’ve always been competitive with my brother, so hopefully next year the tournament will be even bigger.”

Burton added, “We probably worked 100 hours on this tournament. Blake drew up the brackets and finished at 2 a.m. We learned a lot and became more comfortable as we went along. Once we saw the first check come in, both of us knew that our event was actually happening. I still think it’s unbelievable how it all came together.”

Clark agreed, “Can’t wait to see what next year has in store.”

Complete results can be found at https;//thesalisburyopen.squarespace.com .