The roval at Charlotte is the big NASCAR race worth watching 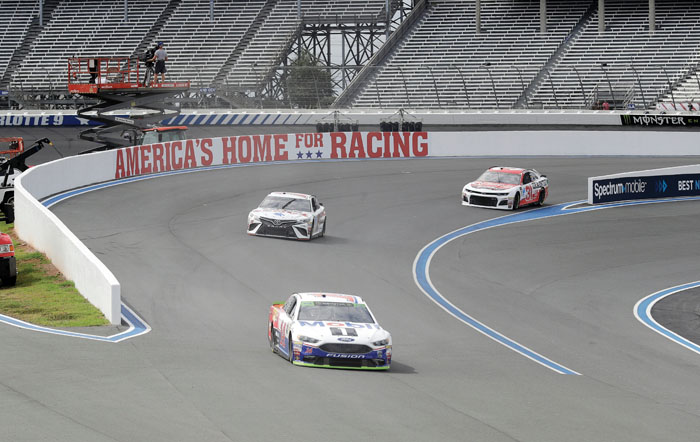 CONCORD (AP) — If there was just one race to watch the entire NASCAR season it would be the one on Charlotte’s newfangled “roval” thing.

NASCAR has claimed the “best drivers in the world” and they are on display Sunday on a bonus day on network NBC at the same time as the NFL. Come watch them try to conquer this new Charlotte Motor Speedway, a mystery track where seasons are on the line because four drivers will be bounced from the 16-driver playoff field.

Add in a desperate free-agent season in which a slew of veterans are hunting the very few available jobs. Times are tough in NASCAR and jobs are going to cheaper , younger drivers, so everyone needs a good race Sunday to show they are worthy of a seat.

And so they get the roval, the brainchild of Marcus Smith and Speedway Motorsports Inc ., and this track has vexed these drivers.

Well done, scream the fans, energized because this roval is something new.

“We need to step outside of that comfort zone and take more risks. There’s a potential for Sunday to be a big day.”

Smith has gone outside the box because he’s got a boring 1.5-mile speedway. The roval, good or bad, is his baby. It’s already a success because fans are genuinely giddy about Sunday, in part because it could be a disaster for four playoff contenders.

“When practice is fun to watch, imagine how fun the race is going to be?” Smith said, somewhat earnestly about what is just one of many forward-thinking SMI projects.

The hybrid 17-turn, 2.28-mile course, which has a 35-foot change in elevation, uses a portion of Charlotte’s speedway along with a dip through an infield road course. It has indeed been entertaining to watch every session in which those “best drivers in the world” are put to the test around the roval.

But it’s been miserable for many of the drivers.

Start with Bubba Wallace, who wrecked when he was the first driver to hit the track in the first test over the summer. Well, he’s had five more incidents this weekend alone.

The iconic No. 43 was crumpled in a head-on crash into a tire barrier so bad it stopped Saturday practice so the barrier on the backstretch coming out of turn 12 could be repaired. Within moments, playoff contender Erik Jones destroyed his car and the barrier was again heavily damaged.

NASCAR moved the angle of the barrier back roughly four feet before the final Cup practice, and Smith insisted he’s open to whatever changes the drivers might need. The tires are there, Smith said, because the drivers asked for them as visual aids. If they need to be altered, let him know, he said.

Well, everyone has an opinion, especially after they’ve bounced all over this peculiar layout. The Xfinity Series was fairly clean , and Justin Marks, a veteran sports car racer who has been on layouts all over the world, compared it most to the road course in Montreal. Chase Briscoe, the race winner, said he relied on his experience at the Eldora Speedway dirt track in Ohio to attack the roval.

Denny Hamlin and Jones, teammates of Kyle Busch of the “Big 3,” are both in falling out and eliminating two of the Toyota entries from Joe Gibbs Racing.

Hamlin and Jones, along with Wallace, of course, will both race in backups Sunday. As will Brad Keselowski, winner of three straight in September in a Ford for Team Penske that made him a hot title contender.  Keselowski crashed in the closing laps of Saturday’s final practice.

His issue was not the troublesome backstretch chicane, but a portion of the track in which designated “turtles” are meant to slow the cars. Drivers foolish enough to hit the artificial blue bumps have been launching, and Keselowski’s car did just that, then lost control, spun and hit an outside wall.

Keselowski, though, is already locked into the second round of the playoffs because of his win in the opener. But in danger of elimination is one of Ford’s other strong contenders, Clint Bowyer, who has been steady with powerhouse Stewart-Haas Racing.

Bowyer teammate Kevin Harvick is part of the “Big 3” and so is Martin Truex Jr., the reigning series champion who won this race on what was the regular oval last year. They’ve been low-key on the track this weekend but it has been amusing in that the expensive and sometimes dangerous wrecks are part of a trial-and-error to see what works on this roval.

Those “turtles” or the tire barrier caused problems for title contenders Hamlin, Ryan Blaney, Aric Almirola, Austin Dillon, as well as Ricky Stenhouse Jr., and all were seen assisting their crews on repairs because driver error caused overtime work.

What else is up at the roval?

NASCAR on Saturday issued clarifications on what it considers shortcutting a chicane, which will be considered judgments if all “all four tires are on the non-track side of the red and white rumble strips that define the chicanes.” Among the regulations are a drive-thru penalty if NASCAR believes a driver deliberately misses a chicane. A competitor can be found to have accidentally missed a chicane and not be penalized.

Sherry Pollex will drive the pace car to open Sunday’s race and the longtime partner of Martin Truex Jr. got advice from the reigning Cup champion for her trip around the roval.

Pollex is an ovarian cancer survivor and selected as the honorary pace car as part of Charlotte Motor Speedway’s longtime commitment to Breast Cancer Awareness. But the changes to the layout will make it a challenge for novice Pollex.

The pace car did indeed spin in a Friday morning trip around the track long before the Cup drivers made their first laps.

Former Carolina Panthers running back DeAngelo Williams was scolded on the difference between a spin and an accident during his Saturday training session for Xfinity Series pace car driver. Williams said he jokingly asked his instructor if he’d seen the video of a pace car “crashing” and he was schooled on the nuances between wrecking race cars and spinning out while avoiding damage.

Turned out Williams was unknowingly mocking the driver who had spun on Friday morning.

Williams was told to drive 40 mph, which felt plenty fast. But it was pointed out that the car will be faster when the real pace car driver is behind the wheel, and Williams was not to be intimidated.

Williams’ pace car was a pink Toyota Camry in support of Breast Cancer Awareness and his DeAngelo Williams Foundation, which received a $10,000 donation Saturday from Charlotte officials. Williams has long had a visible community presence and Charlotte is one of the cities in which he’s paid for mammograms. For those who had cancer detected in the mammograms, Williams said his foundation has covered every cost from detection to the completion of treatment.