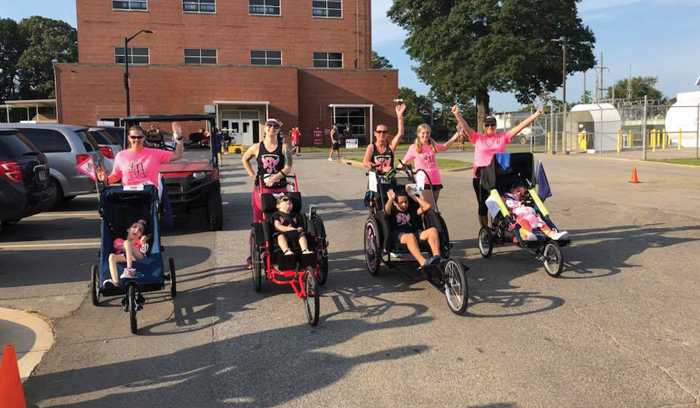 Travel agent finds her passion
Years ago, I got a call from Allison Tuck who wanted some help becoming a runner. She’s been at it since and went on to do many races, some of them in far off places made more accessible by her job as a travel agent. In fact, Allison has helped me with much of the complicated travel associated with my bicycle adventures.
But Allison has recently found huge success with another passion. She was waiting at the starting line of a race in Myrtle Beach with her son, Parker, who often uses a pediatric wheelchair because he suffers from psychogenic nonepileptic seizures. An interested runner walked over and asked Allison if she planned to push Parker in the race. Upon finding that Allison would leave Parker with his dad, she offered information on Ainsley’s Angels and said, “We’ll give you a chair and you can run with your son and do the race together.”
Two years ago, Allison, who lives in the West Davidson area, said, “I went home and got on ainsleysangels.org, found some races down at the beach that Ainsley’s Angels was participating in, signed him up and the rest was history.”
Ainsley’s Angels is a national nonprofit organization that helps special needs children and adults participate in endurance races. The organization provides chariots that are specially equipped to carry those who have exceptional needs.
Parker plays baseball with Miracle League in High Point, he is an orange belt in Karate, and he also plays golf with the First Tee Program in the Triad.  Parker is 10 years old. The requirement for Ainsley’s Angels is that the rider cannot otherwise complete an endurance race on their own.
Starting with just one chair, Allison came to Salisbury this past May to run the Salisbury PD’s Foot Pursuit 5K, organized to raise funds for Special Olympics. She said, “I received the first chariot through fundraising. During the Salisbury race, the Salisbury Rowan Runners presented Ainsley’s Angels with a check to buy two more chariots.” Each one is specifically equipped for special needs participants, with places for crucial items such as medical cards and oxygen tanks. One chariot can be converted so that a bike can pull the chariot during triathlons.
Allison continued, “That race basically put us on the map as far as Ainsley’s Angels was concerned. All of the race directors have let these children in for free, they often give a discount or free entry to the runners, so it’s been a great partnership. Not a one has told us no so far.”
Ainsley’s Angels has since participated locally in the 2Day 5K in China Grove and the VAEA 5K in Salisbury. They have an open invitation to join us at any of the city or county events. Upcoming races already scheduled are the Cannonball Marathon, Half Marathon and 5K in Greensboro on Oct 13, Hawg Run 5K in Lexington on October 27, Mission 5K on November 3 in Winston Salem, Butterball 5K on November 22 in Salisbury and the Winter Flight 8K on January 27 in Salisbury. Ainsley Angels are always adding new races to interest each area served.
Other conditions of some of AA’s current riders are Cerebral Palsy, epilepsy, Downs Syndrome, Short bowel syndrome, non verbals, Cornelia de Lange Syndrome, HSP3a-complex, kids with pacemakers, feeding tubes and Joberts Syndrome.
Runner Lauren Bruce said, “You can tell I love being involved with AA because it’s important to include everybody and advocate for those that can’t. Being pulled by an angel during a race gives my running and training new meaning, and I’m training now for a half marathon with AA!”
Allison and Ainsley Angels now have eight chairs and a trailer to haul them. The future looks very bright. She said, “My goal for Ainsley’s Angels in the Triad is to grow more runners and riders especially in Davidson and Rowan County.  I would like to see our fleet of chairs grow from 8 chairs to around 12 to 15 chairs and include some more of the chairs like the Axiom where we can do bike races and triathlons. “
Allison always brings a passion and wonderful personality to her endeavors. Feel free to contact her at travelsbyallison@gmail.com
The next two races are the Breeze 5K in Landis and the T’Man’s 5K in Mooresville on October 6-7. Look for them and other upcoming events at www.salisburyrowanrunners.org

Watch out for that Wheel bug bite