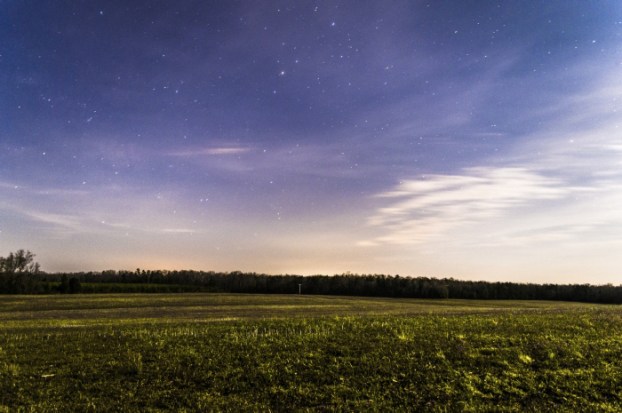 A smattering of stars dot the night sky over a field in Rowan County near Tuckertown Reservoir. Light pollution from a nearby municipality forms a bright spot near the horizon. Josh Bergeron/Salisbury Post

Clyde, Time Was: A starry-eyed look at the heavens

Time was, we could see stars.

“Blossom the lovely stars, the forget-me-nots of angels,” Longfellow wrote.

Before L.E.D. and the city lights that light the dark matter and keep birds awake, we could travel to the stars in our own backyard, only a few lumens away.

“As stars to thee appear, seen in the galaxy, that milky way, which nightly as a circling zone thou seest, powdered with the stars.” — Milton’s Paradise Lost.

Remember where you were the first time you saw the North Star in the Big Dipper?

Many a slow dance evoked the tunes of “Catch a Falling Star,” “Stardust,” “Stairway to the Stars” or “Oh, Oh, Venus.”

We wanted to be a star and stand out in a crowd, but we soon found out, like Van Gogh in “Starry Night,” not everyone can be the brightest and best in the sky. “What stars do spangle heaven with such beauty?” and “Earth Treading stars that make dark heaven light.” — Shakespeare.

Stars are suns. The nearest star known to us is 275,000 times as far from us as we are from the sun, which is 94 million miles. Where are you in this picture?

The zodiac follows each planet in its unending path around the sun. The earliest known catalogue showing the positions is that of Hipparchus (100-170 A.D.); the 48 original constellation phenomena were described by Aratus in 270 B.C. How they decided to put Greek faces and connect the dots is anybody’s guess.

“God of saints to whom the number of starry host is known, many saints by earth forgotten live forever round your throne.”— John Ellerton’s hymn.

Look for stars on tombstones, etched in glass and on a roof finial on West Bank Street. St. John’s Byzantine high altar in the chancel once was sheltered by gold-leaf stars hand-painted on the azure blue ceiling. Where have all the stars gone? Where have all the members gone?

Stars fade and flicker; people just burn themselves out on drugs.

Even with all the dark and doom, a few stargazers are still around. Tom worked at the Green Bank Observatory in West Virginia, where there were no cell phones, microwaves, digital cameras, or even spark plugs in a quiet zone. Where can you go for one square inch of silence and explore hidden wonders?

Look up; it’s free. There is nothing like sleeping under the stars. When’s the last time you did that?

The 1958 Shuford Science Building at Catawba houses a 15-inch Cassegrain telescope. Some are in backyards in Rockwell, where it’s still dark enough. Neil and Diane at Horizons Unlimited will take you out of this world at the now 50-year-old Woodson Planetarium. They got the right name, for there is no end to the discovery that awaits “when you wish upon a star as dreamers do, makes no difference who you are.” Thanks, Walt and Jiminy.

“For one star differeth from another star in glory,” says I Corinthians 15:41.

You can be a star in your own space-time — be different. The Divine Sarah Bernhardt was probably the biggest star to shine in Salisbury. Movie stars were born to shine, but few find stardom. Too many crash and burn up when they try to enter the real atmosphere. Star power can flicker and fade before you can say starstruck. Ask any fallen star.

Then there are some “wandering stars to whom is reserved the blackness of darkness forever” — Jude 1:13. We can actually hear the gravitational waves when black holes collide with each other. Dark stars are out there.

Don’t blame the stars for your bad luck. In “Bedouin Song,” Bayard Taylor tells us, “I love but thee with a love that shall not die till the sun grows cold, and the stars are old, and the leaves of the Judgment Book unfold.”

Rev. 8:10-11: “And there fell a great star from heaven … and many men died of the waters, because they were made bitter.”

Shooting stars may be a premonition. “Woe to the inhabitants of the earth,” says Revelations.

Look for meteor showers or comets when you are not busy folding paper stars. Recite along with Tennyson: “Sunset and evening star and one clear call for me!”

Our innocent childhood recalls from memory: “Star light, star bright, first star I see tonight. I wish I may, I wish I might, have this wish, I wish tonight.” Keep wishing. Look to the skies for enlightenment. Hitch your wagon. You may live there some day.

Saturn is up. “And the planet of love is on high beginning to faint in the light that she loves, on a bed of daffodil sky.”

Clyde, Time Was: First county fairs would seem mild to us now

Time was we had a kermis in the fall. Ker for “church” and mis for “mass” — festivals with fairing... read more