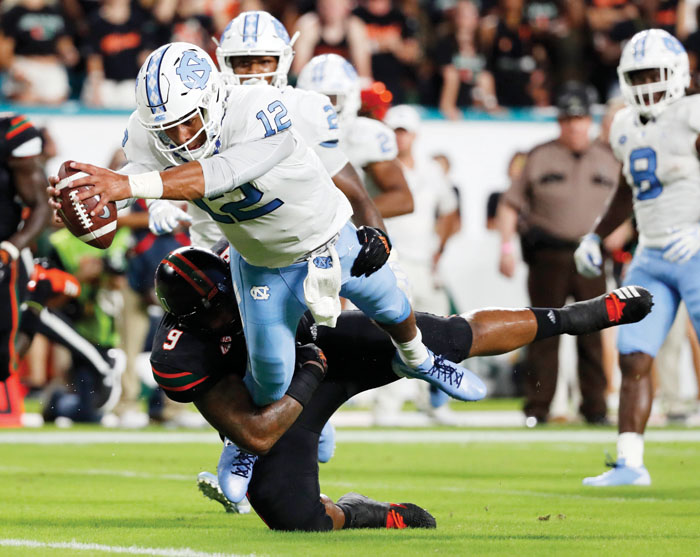 North Carolina quarterback Chazz Surratt (12) dives in for a touchdown as he is tackled by Miami defensive lineman Gerald Willis III (9) during the first half of an NCAA college football game, Thursday, Sept. 27, 2018, in Miami Gardens, Fla. (AP Photo/Wilfredo Lee)

MIAMI GARDENS, Fla. (AP) — Miami tied a school record with three defensive touchdowns, N’Kosi Perry threw for a score in his first start and the No. 16 Hurricanes downed North Carolina 47-10 on Thursday night.

Romeo Finley and Joe Jackson ran back interceptions for scores, Jonathan Garvin scooped up a fumble and rumbled in for another touchdown and the Hurricanes (4-1, 1-0 Atlantic Coast Conference) wound up forcing six turnovers in all.

Perry didn’t have to do much, completing eight of 12 passes for 125 yards with one touchdown and one interception in his debut as the Miami starter. Deejay Dallas rushed 11 times for 114 yards and a touchdown for the Hurricanes, whose 12th straight home regular-season win matches the school’s longest in 15 years.

Chazz Surratt, making his season debut after serving a three-game suspension for selling team-issued shoes, relieved North Carolina starting quarterback Nathan Elliott early and rushed for a touchdown for the Tar Heels (1-3, 1-1). But Surratt was intercepted three times, the Tar Heels also fumbled the ball away three times and they were a combined 3 for 16 on third and fourth downs.

Miami coach Mark Richt kept everyone guessing on his decision whether to start Perry or incumbent Malik Rosier right up until kickoff. The Hurricanes didn’t even list a quarterback on the starting lineups that were shown on the in-stadium video boards shortly before the game.

Perry went the whole way, sans for a last-play kneel-down by quarterback Cade Weldon — though Miami’s defense was its best offense.

The three defensive touchdowns were a first for Miami since a game against West Virginia on Sept. 23, 2000. The Hurricanes became the first ACC team with three defensive scores in a game since Boston College in 2006, and are now one of two teams nationally this season to do so — along with Akron, which did it against Northwestern earlier this month.

It was Miami’s first time forcing six turnovers in an ACC game since a win over North Carolina State in 2012.

North Carolina: The Heels were their own worst enemies. Besides the five turnovers, they had goal-to-go situations twice and came away with a total of three points. A drive to the Miami 3 early in the game netted the field goal, and a drive to the Miami 7 in the third quarter became a third-and-goal from the 31. The result there was a missed 48-yard field goal try.

Miami: The Hurricanes’ 33 first-half points were their second-most by halftime of any ACC game, but the second half looked very ugly offensively. And a major storyline during Florida State week will be the status of LB Shaquille Quarterman, who appeared to twist an ankle in the first half, returned to start the third quarter — and aggravated the injury early in the third quarter.

Miami will remain in the AP Top 25. The last time Miami was ranked going into three consecutive Octobers was from 2003 through 2005.

North Carolina: Hosts Virginia Tech on Oct. 13. The Tar Heels had two weeks off because their game against UCF was cancelled because of Hurricane Florence, then played twice in five days, and now have another two-week break.

Miami: Hosts Florida State on Oct. 6. The Hurricanes snapped a seven-game losing streak to the Seminoles with a dramatic win last season — and now will try to snap a six-game home slide against their rivals. FSU last lost at Miami in 2004.

N.C. A&T (4-1) trailed 16-3 late before rallying. The Aggies scored with 35 seconds left in the first half on Jah-Maine Martin’s 40-yard run, then received the second-half kickoff and went 94 yards to take the lead at 17-16. Marquell Cartwright highlighted the drive with a 53-yard run and Zachary Leslie capped it with a 9-yard touchdown reception.

The game was scheduled after Presbyterian’s contest against Stetson was canceled because of Hurricane Florence.

Davis broke two tackles to score from 7 yards out on fourth down, capping a 13-play, 89-yard drive with 14:45 left in the fourth quarter. Lindsey Wilson replied with a 10-play drive but it ended on Reggie Brown’s interception in the end zone.

John Walker threw for 155 yards and one touchdown for Presbyterian (2-1). Jarius Jeter rushed for 94 yards and Zola Davis added 87.

Cameron Dukes threw for 139 yards and one interception for Lindsey Wilson. The Blue Raiders had six first downs and 101 total yards in the first half.

There was a lightning delay with 14:49 to go in the second quarter that lasted around an hour.

Ron Hunt made it 24-16 on the first play of the fourth quarter with a 7-yard catch, and Malik Wilson hauled in a 44-yard touchdown pass on third-and-19. Cartwright rushed for 157 yards.

Tyrece Nick had 90 yards through the air and 49 on the ground for South Carolina State (0-4). Freshman Farrika Grier opened the scoring with a 7-yard run in the first quarter, giving SCSU its first points before halftime all season.