High school football: North can’t wait to get back at it 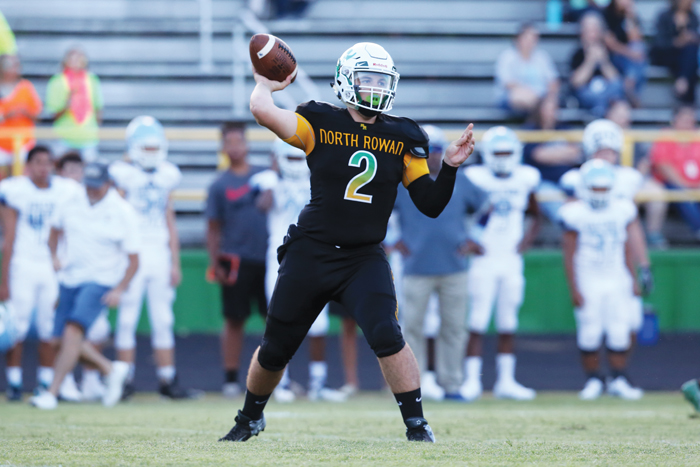 North Rowan QB Willis Mitchell and his teammates are excited about playing again after several weeks off. Photo by James Sipes for the Salisbury Post

Ranked seventh in 1A, North Rowan (3-1) hasn’t been in a game since Sept. 7, so the Cavaliers are excited about tonight’s home jayvee matchup with South Stanly.

The varsity Cavaliers will be on the road at South Stanly to start Yadkin Valley Conference play on Friday.

“No one plans for or wants two weeks off in the middle of the season, but we had our bye week and then we had that North Moore game postponed by Florence,” North head coach Ben Hampton said. “Now we’re going to play  a South Stanly team that’s been throwing up about 40 points per game. This is a big game. We can’t afford any rust.”

While there’s concern about the lack of  game action, there are benefits from the down time.

“We had (linebacker) Tyzai Lyles and (two-way lineman) Benajmin (Rhode Island) Caldwell pretty banged up after our last game with Carson,” Hampton said. “They’ve had a chance to heal with three weeks of rest.”

More good news. North center Kendal Reid (5-11, 310), who was hurt in the West Rowan game, is getting close to returning from a knee injury.

“He’s the only guy we’ve got who’s still out, and he’s on the rehab trail,” Hampton said.

The NCHSAA has officially pushed the regular season back a week to allow eastern teams time to make up games affected by Florence.

North Rowan will make up its game at North Moore on Thursday, Nov. 8, to close the regular season.

“North Moore doesn’t have a jayvee team, so we’re going to play that game Thursday,” Hampton said. “That will give us a little bit of extra time to prepare for the playoffs.”

He’s had two more long touchdowns called back by flags during his amazing spree.

The county hasn’t seen anything close to this since Eric Cowan and Trey Mashore were terrorizing West Rowan’s opponents together in 2010. Mashore and Cowan both scored five TDS that season on either defense or special teams.  Gill has matched them in a remarkable, two-week flurry.

The TDs were the first of the season for Johnson, the reigning county track champ in the 100 and 200 meters.

McLean, a running back as a freshman, had only one TD pass the first four weeks, but he’s making some strides.

Safety Luke Holland came up with his second interception of the season against Lexington. He also has a fumble recovery.

Lexington had negative rushing yards, the first time Salisbury’s defense has stuffed a running game so effectively since West Davidson had minus-5 rushing yards in a 34-0 Salisbury victory in 2015.

Carson coach Joe Pinyan reports that the recent wedding of  his daughter, Amie, and Riley Gallagher, who came through with 16 touchdown catches as a tight end for Pinyan’s 2009-10 teams at Salisbury High, went quite smoothly.

“Riley made a lot of big receptions for me at Salisbury,”  Pinyan quipped. “But Amie is, by far, the best catch of his career.”

Carson (2-4)  is open this week and will try to heal bumps and bruises from a 43-6 loss to Central Cabarrus.

“Central is as good as people are saying they are,” Pinyan said. “Our kids played really hard, and it was 10-0 with five minutes left in the first half, but that’s when it got away from us.”

Carson’s only TD was on a 22-yard pass play from Justin Smith to AJ Jackson.

Pinyan doesn’t like to play athletes both ways, but the Cougars were short-handed at linebacker at Central, and sophomore Michael Gonsalves stepped in at linebacker and continued to get carries as one of the running backs.

Pinyan was happy with the effort of his backs.

“Jerry Cipres played consistent like he has all year,” Pinyan said. “CP Pyle ran the ball hard. Evan Johnston had good runs late in the game at fullback.”

Pyle had 49 yards on 13 carries to lead the Cougars. Johnston had 38 yards on five carries.

Carson continues to have issues with pass defense and allowed 279 passing yards to the Vikings.

Carson (2-4) has lost four straight. One loss was to North Rowan, ranked seventh in 1A. Davie is  a pretty good 4A. A.L. Brown and Central Cabarrus are among the top 20 in 3A.

Carson’s game coming off the bye week will be against North Iredell, and the Cougars will have a good chance to end their skid.

The Cougars need it. They haven’t won since Aug. 24.

The Raiders are hopeful Huffman will be cleared to return for Friday’s homecoming game with Oak Grove. If he can play, Reynolds will return to his safety position.

The Raiders (1-4, 1-1) are expected to rely on Michael Sloop as their primary running back moving forward.

Sloop’s brother, Brandon, was one of the county’s all-time rushing leaders during his four-year varsity career at Carson, ranking third behind West’s K.P. Parks and Carson’s Shaun Warren with 4,824 yards.

Sloop will play both ways on Friday. He’s also a starting linebacker.

This will be South’s historic first meeting with Oak Grove. The Grizzlies had a junior varsity team last season, but not a varsity squad. Oak Grove is building toward a strong program and is 3-0 in jayvee competition this season and 2-3 at the varsity level. Oak Grove head coach Mark Holcomb piloted North Davidson for many years.

Elijah Graham and Daniel Sell were leaders as West Rowan’s punt return unit turned in several game-changing plays in the 44-30 win against Concord.

Sell blocked a punt that led to a West TD.

Right guard Jonny Hassard suffered a foot injury against Concord but was able to play through some pain and had one of his best games.

West is 2-2 all-time against Cox Mill, Friday’s opponent. West won, 21-3, in the most recent meeting in 2016. Cox Mill replaced South Rowan on this year’s West schedule.

The Mustangs (3-3) are off this week after losing 42-7 to unbeaten Northwest Cabarrus in their final non-conference game.

East has dropped three straight after a promising start. East has been blasted 111-24 the last three weeks.

East’s first game after the open week  — at West Rowan on Oct. 5  to start North Piedmont Conference — obviously will be pivotal if the Mustangs are going to get things turned around.

After struggling at Mount Pleasant, East got its running game going against Northwest, led by Sammy Pinckney’s 110 yards on 20 carries. The Mustangs rushed for 203 yards.

East just hasn’t been able to get started  lately. The Mustangs haven’t scored a touchdown in the first half in their last three games. They’ve been outscored in the first quarter, 48-0, the last three weeks.

There have been 69 or more points scored in five of Davie’s six games.

Davie’s stout jayvees (4-1) got another win on Tuesday against Carson in a makeup game from Florence week.

Sophomore Nate Hampton is approaching 1,200 passing yards for the season.

QB Jordan Medley (6-3, 200) won another offensive player of the week award for the Davie game.  Medley threw for 228 yards and three TDs, with no interceptions. He also ran for a score.

End Alante Johnson, who had a strip and long fumble return TD was recognized as  the Wonders’ defensive player of the week.

Other award winners were “Hawg of the Week” (tight end Steve Robinson), “Hit Man of the Week” (running back LA Davis) and special teamer of the week (safety Dezmond Adams).

The Wonders will start South Piedmont Conference play with a bang on Oct. 5 when they take on a strong Central Cabarrus team.