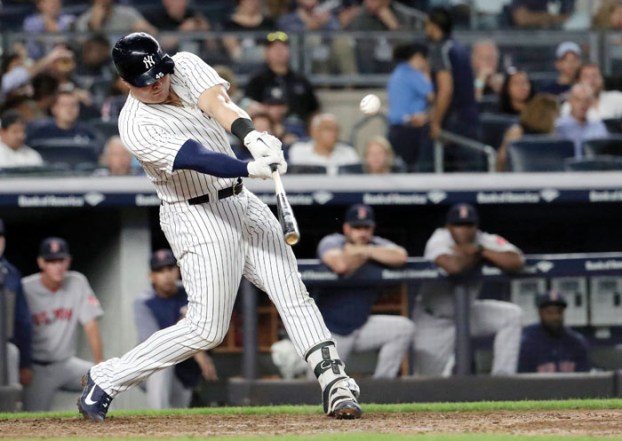 Luis Severino (18-8) pitched seven innings of one-run ball, and the Yankees had no need for All-Star closer Aroldis Chapman on the day they activated him from the disabled list. Chapman had been out since Aug. 21 with left knee tendinitis.

Mookie Betts had two strikeouts and no hits in his return to Boston’s lineup. He pulled a possible grand slam just foul in the ninth before grounding into a game-ending double play. The AL MVP contender sat out Tuesday after injuring his left side two days earlier, but came back to bat leadoff as the designated hitter.

The Yankees will try to send Boston packing Thursday with the AL East still undecided. The Red Sox lead the division by 9 1/2 games and entered this three-game series needing one victory to lock up the division. New York maintained a 2 1/2-game lead over Oakland for the top AL wild card.

Price (15-7) surrendered three homers this time, each aided by Yankee Stadium’s short right-field porch. Andujar hit his 25th just over the wall for a 1-0 lead in the second, and Voit added solo shots in the fourth and sixth to nearly the same spot.

CLEVELAND (AP) — Jason Kipnis hit a grand slam with one out in the ninth inning and Cleveland beat Chicago.

Kipnis hit a 3-2 pitch from Ian Hamilton into the right field seats for his 1,000th career hit and was doused with buckets of water by his teammates as he conducted a postgame television interview.

The AL Central champions were held to two hits through eight innings before their comeback.

Zach Eflin and five relievers combined on a six-hitter and Odubel Herrera added two-run homer for the Phillies. They won consecutive series for the first time since July 25 and stayed 5 1/2 games behind division-leading Atlanta.

Seven of Philadelphia’s final 11 games are against the Braves, including a four-game series beginning Thursday night in Atlanta.

Walker and Owings were part of a Diamondbacks lineup that featured only two regulars in the field — Nick Ahmed and Ketel Marte. The group did most of its damage against Hamels (9-10), who had yet to lose a start since joining the Cubs via trade from Texas on July 27.

Ray (6-2) struck out eight and walked four. Walker and Owings drove in three runs each.

The Cubs’ NL Central lead dropped to 2 1/2 games over Milwaukee.

Manny Pina also had a three-run shot and Aguilar finished with four RBIs. They helped the Brewers boost their lead for the top NL wild card to three games over St. Louis.

Gonzalez (9-11) was acquired in a trade with Washington on Aug. 31 in an effort to bolster the Brewers’ starting rotation. The left-hander has picked up a victory in two of his three starts with Milwaukee, and the Brewers have won all three games.

Reds right-hander Matt Harvey (7-9), a pitcher the Brewers nearly acquired a few weeks ago before a proposed deal fell through, gave up Aguilar’s game-changing home run.

The Mariners took two of three in the series from AL West-leading Houston.

Rookie Matt Festa made his first career start on a bullpen day for the Mariners and threw a perfect first inning before Casey Lawrence (1-0) took over and allowed one hit in three innings. Adam Warren, Shawn Armstrong, Zach Duke, Justin Grimm and Roenis Elias pitched an inning each to close it out.

The Rays have won 14 of 17 games in September. They have 11 remaining and remained 5 1/2 games behind Oakland for the American League’s second wild card.

Adrian Beltre hit his 13th homer for the last-place Rangers. It was the 475th of his career to match Stan Musial and Willie Stargell for 30th on the career lost. He’s 15th with 3,159 hits.

Jake Bauers had a two-run single and scored on Willy Adames’ single in the second off lefty Yohander Mendez (2-2) to put the Rays ahead to stay at 3-0. Pham hit his 18th homer leading off the third, and Matt Duffy’s two-run double in the fourth made it 8-1.

Pham went deep again in the eighth for his seventh career multihomer game. The homer was off 45-year-old Bartolo Colon, who was pitching in relief for the first time since his last start Sept. 5.

Gabriel Moya started for Minnesota, but was replaced by Gonsalves in the second inning, marking the sixth time this season the Twins used an “opening pitcher.” Gonsalves (1-2) allowed one hit and a walk while striking out four.

Ehire Adrianza was 3 for 4 with three runs scored, Tyler Austin was 2 for 3 with two RBIs and two runs scored and Willians Astudillo was 2 for 4 with three RBIs for the Twins, who swept the three-game series against the Tigers. Spencer Turnbull (0-1) made his first major league start, allowing six runs and six hits and a walk in four innings.

Archer (5-8) allowed one run on six hits with eight strikeouts and one walk. The Pirates remain marooned in fourth place in the NL Central despite a five-game winning streak.

Felipe Vazquez allowed a walk in the ninth en route to his 35th save.

Adam Frazier broke a 1-1 tie with a homer to right-center with two outs in the fifth inning off rookie right-hander Heath Fillmyer (3-2). Adalberto Mondesi homered for Kansas City.

The Orioles bounced back a night after their 108th loss of the season, the most since moving to Baltimore in 1954. They remained three away from the franchise mark set by the 1939 St. Louis Browns.

Jimmy Yacabonis started for Baltimore and threw four scoreless innings, followed by Mike Wright (4-2), who blanked the Blue Jays over two innings. Miguel Castro allowed a solo homer to Billy McKinney in the eighth that cut the lead to 2-1 before Tanner Scott managed the final out of the inning. Mychal Givens finished for the save. Marco Estrada (7-13) was the loser.

Myers’ two-run homer highlighted a five-run second inning. Galvis added a three-run shot in the eighth as San Diego won for the second time in 10 meetings against San Francisco.

Erlin (4-7) beat the Giants for the first time and snapped a career-high four-start losing streak.

Rookie Armies Garcia homored for the Giants. Chris Stratton (10-9) too the loss.