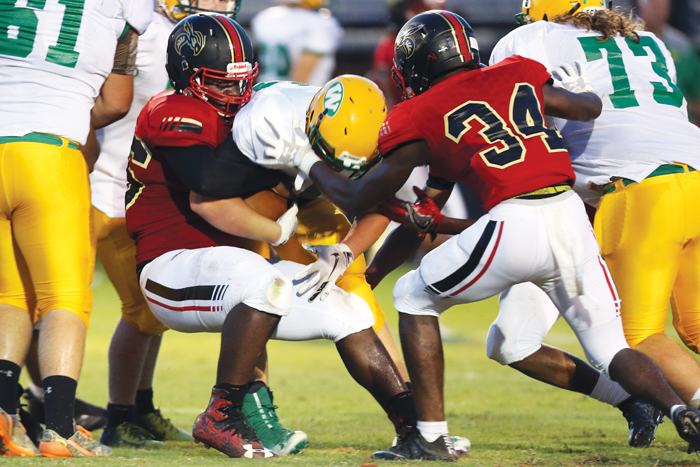 Salisbury’s Zae Clay (26) grabs West Davidson’s Harrison Gobble from behind and Josh Miller (34) joins in to stop the play for no gain. James Sipes for Salisbury Post/Sept 12, 2018

There’s a good possibility the NCHSAA will extend the fall sports season as schools attempt to make up games affected by Hurricane Florence.

On Tuesday, the NCHSAA sent an email to athletic directors across the state and informed them that an announcement as far as adjusting the playoffs will be made no later than Sept. 30.

For significant areas of coastal North Carolina, school systems will still be closed this week.

Cameron Gill had one of the all-time nights in the county in the Hornets’ 48-18 win against West Davidson last Wednesday and is one of two athletes to receive the NCHSAA Performance of the Week award.

Gill made three interceptions and had a punt return, interception return and fumble return for touchdowns. He had a receiving touchdown called back by penalty.

The other honoree was East Lincoln soccer player Chase Gilley, who had two hat tricks in a row.

“In ordinary circumstances, he would’ve been our player of the week, but Cameron Gill had that incredible game,” Salisbury head coach Brian Hinson said. “Wood is 149 pounds, but 148 of it is heart. When the lights come on, he shines.”

Salisbury (2-2, 2-0 Central Carolina Conference) worked hard on its running game at Wednesday’s practice with the idea that running the ball more efficiently and physically will aid the passing game. The Hornets still want to throw it 75 percent of the time.

The SHS  could get a boost this week from the return of lineman Carter Jenkins. He’s been out since being injured in the Carson game in Week 2.

South had just 15 yards of offense.

South’s defense didn’t give up a lot of yards, but Ledford operated with short fields all night.

Leading South’s defense was Michael Sloop, who played some at linebacker and some on the defensive line.

All-time, South has won 12 of 17 contests against the Black Knights.

It’s homecoming for the Mustangs (3-2), who are trying to snap a two-game losing skid.

Both teams own close wins against North Stanly, which is ranked in 1A.

It’s been an exciting all-time series with Northwest. The Trojans lead the Mustangs, 18-17.

Senior Sam Wall scored his sixth and seventh TDs of the season on receptions in last Wednesday’s 32-14 loss to Mount Pleasant.

He has 31 career touchdowns and has topped 2,500 rushing/receiving yards for his career.

Quarterback Logan Forbis had a career game in a losing cause at Mount Pleasant with 221 passing yards and two scores.

Idle last week, the ninth-ranked Cavaliers (3-1) have played only one game in September.

They’ll start Yadkin Valley Conference action as heavy favorites at North Moore on Friday. The Cavaliers are 5-0 all-time against North Moore. It was 54-7 last year.

Notable for North Rowan in the early going are the county’s strongest run defense, the county’s toughest defense to score on, a 2-0 road record and the spectacular play of running back Malcolm Wilson, who has topped 100 rushing yards in every outing.

The last time North Rowan’s defense allowed a score was on Aug. 24 in the loss to West Rowan. North has shut out Lexington and Carson in its last two outings and has a shot at another one at North Moore.

The last time the Cavaliers achieved three consecutive shutouts was during the 2013 season when they blanked Thomasville and Salisbury to finish the regular season and then shut out Surry Central to start the 2A playoffs.

It’s been tough sledding at times, but West Rowan (2-2) remains firmly committed to running the football.

He’s already moved into the county’s all-time top 20 as far as career receptions and is closing in on a top 10 spot in receiving yards.

Jalen’s brother, Juwan, had a catch for 24 yards in Guilford’s wild 91-61 loss to Davidson on Saturday.

West is home against Concord on Friday. The Spiders have struggled this season, but they’ve won 16 of 21 all-time meetings.

While a lot of teams in the county are still trying to get running games untracked, rushing yards have been no problem for county rushing leader Carson (2-3).

Carson plowed for 297 yards in Wednesday’s 40-33 loss to Davie County.

Carson’s issues have been on the defensive side, and defensive shortcomings have been magnified by a difficult non-conference schedule that has included A.L. Brown, Davie County and North Rowan.

It won’t get easier for Carson on Friday at unbeaten Central Cabarrus, which is playing like a top 10 team in 3A.

Carson has beaten the Vikings only once in five tries.

Quarterback Jordan Medley’s performance in the 42-13 win against West Rowan was reminiscent of the dual-threat games Jamill Lott turned in as the quarterback for the Wonders’ 3AA state runner-up team in 2008.

Against the Falcons, Medley threw for 276 yards while running for 96. He accounted for five touchdowns.

Medley has only played four games (he missed the Carson game with a toe injury), but he already has topped 1,000 yards of total offense. He has 275 rushing yards and 780 passing yards.

Based on common opponents — the Wonders beat West Rowan, while West beat Davie — the Wonders are substantial favorites at home. The Wonders also had a much easier time with Carson than the War Eagles did.

Davie’s tight loss to Greensboro Page on opening night is now a win, officially, as Page has forfeited three games due to players being academically ineligible.

Davie didn’t run the ball much early in the season, but junior Josh Robinson put up 175 rushing yards against Mooresville and powered for 176 against Carson.

Davie’s games have been wild. The War Eagles have averaged 30.4 points per game, but they’ve allowed 34.4.