Starr report got a president impeached 20 years ago; Ken Starr wants to remind you why 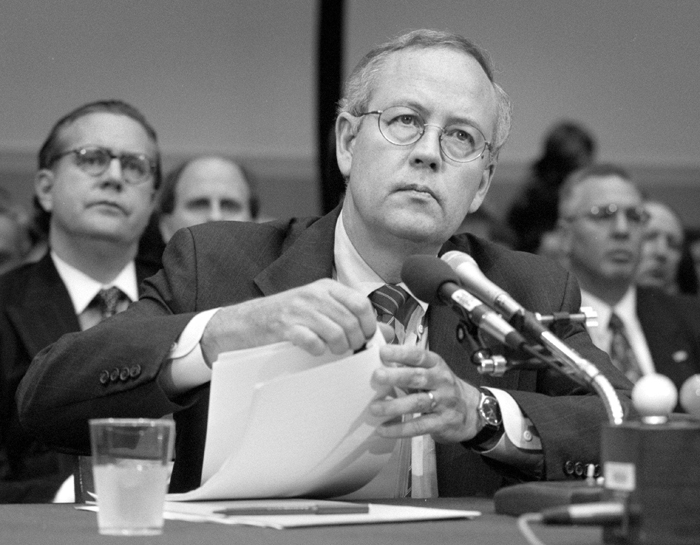 NEW YORK — It’s the Sunday before the 20th anniversary of the Starr report (“… she and the president kissed, and he touched her bare breasts with his hands and his mouth …”) and its author is late for church. He wears a navy suit, no tie, and gray Nikes.

“I’m gonna brush what remains of my hair,” he says.

Ken Starr is a polite man. Instead of “hell,” it’s “you-know-what.” Instead of “goodbye,” he’ll say “blessings!” Instead of “Putin”? “The thug.” He likes his work, and his country, to “turn square corners.” He does not jaywalk through life.

“As we say in the New Testament,” he begins, and what follows, sincere as it may be, blends right in with the colorless mist outside his Manhattan hotel.

He’s a man who still talks and looks and acts as if he’s wearing a black robe. If life had gone another way — if George H.W. Bush hadn’t bumped David Souter higher on his list, if the Clintons hadn’t invested in riverfront property — Kenneth Winston Starr might now be rounding out his third decade on the Supreme Court, and his impact on America would be orderly, gilt-framed, suitable for the mantel, instead of how some people see it: a stain on a couch cushion that’s been sheepishly flipped over.

Sex near the Oval Office.

Starr was the dogged independent counsel trying to get to the bottom of metastasizing Clinton scandals who eventually found the finger pointed back in his own direction, accompanied by accusations of a “witch hunt.”

“A nightmare that won’t ever go away,” Starr’s wife, Alice, said back then, when they were living in McLean, Virginia, under 24-hour police protection.

Trying to make sense of it all is like trying to fold a fitted bed sheet.

Bill Clinton’s approval rating went up, and he retired to elder statesmanship. Hillary Clinton won the third-highest vote total in the history of the republic, well ahead of the man whom Starr voted for instead.

And now Starr, relieved that the Clintons are out of office for good, is squeezed in the last row of the sweaty balcony of Times Square Church. He sways politely to praise music. He listens to the pastor preach about King Solomon, how wisdom can decay into hubris and a man can become a god to himself.

“Oh, Jesus, let me finish well,” the pastor says. “Keep me diligent. Don’t let me assume everything is right.” Starr applauds with the other congregants. In certain matters, he doesn’t assume. He knows he’s right.

He also knows that he is guilty of pride.

“As C.S. Lewis says, pride might be the most dangerous of sins,” he says. “So I have many shortcomings, and most are rooted in pride.”

Starr is back in his hotel room on the 43rd floor, pouring Pellegrino into a wine glass. Solomon on the brain, he mentions his love for the Book of Ecclesiastes. Wisdom. Folly. Vanity. The more knowledge, the more grief. Life: a chasing after the wind.

His jowls have matured. His hair has gone white. His vowels are pillowy. He is still professorial and preacherly, but gentler and cheerier and more likable than the needle-nosed prosecutor who appeared before the House Judiciary Committee 20 years ago this autumn.

He is 72, a grandfather to seven, still practicing law, active in the realms of religious liberty and immigration. He’s a mentor in the public schools of Waco, where he lives.

Lyndon Olson Jr., a Texas Democrat who was Bill Clinton’s ambassador to Sweden, wasn’t prepared to like Starr when they met — and told him so. But they’ve become “great friends,” Olson says. “He’s been a wonderful citizen in Waco.”

Now Starr has laid out the defining saga of his life in a book. Its diligence and rectitude will surprise no one. He wants to remind us that he, the seeker of truth, is not to blame. He swats away words like “redemption” and “rehabilitation.”

“I view it as not an apologia at all,” he says, “but simply: Tell the story.”

In the end, Starr and his team at the Office of the Independent Counsel sent a 453-page report (plus 2,000 pages of appendixes) to Congress, 20 years ago last Tuesday. The bluntly sexual language — reprinted in newspapers across the country and eventually a best-selling book — was a shock.

To many Republicans, it was the slingshot to take down Goliath. To others, it was “a voluminous work of demented pornography,” in the words of journalist Renata Adler. It triggered the first presidential impeachment in 130 years — and, in Starr’s view, brought to account a president abusing his powers, along with 14 other people convicted in the probe.

Starr wrote the book to remind people of this.

“The system worked,” he says.

His book is not called “Faith in the System.” It does not feature the author on the cover, staring at the horizon. No, the book is called “Contempt,” and the title is written in jaundiced yellow over a grayscale photo of Hillary whispering in Bill’s ear.

“Neither had the character to become the leader of the free world,” Starr says now.

His book reminds people that Bill is the only U.S. president ever held in contempt of court and argues that Hillary deserves the public distrust that doomed her presidential chances. “Smug,” “dismissive,” “brittle,” “aloof” and “liar” are among the words his book uses to describe her, along with “enabler,” a charge that Donald Trump invoked during the 2016 campaign.

Starr assumed she would win. “I said I may have to move to Australia, because she is the commander in chief,” Starr says, chuckling. “And she’s very vindictive.” (Hillary Clinton’s spokesman did not respond to requests for comment.)

Whatever catharsis came from writing this book did not purge Starr of his disdain for the Clintons. Their legacy is contempt for justice, he says, and his is the pursuit of it, at any cost.

The animus remains mutual. “The American people saw through Starr’s obsessive pursuit of President Clinton 20 years ago,” says Bill Clinton’s lawyer, David Kendall, who famously sparred with Starr in front of Congress in November 1998, “and will see through his present attempt to rewrite history to vindicate his own sullied reputation.”

We are now far enough from the ’90s to view the whole picture, but we still can’t agree on what we see.

“This case involving Monica Lewinsky should’ve been dead on arrival,” Starr prosecutor Bruce Udolf told “Slow Burn,” a Slate podcast on the saga. “And it served no useful purpose.”

A&E will soon air a six-part documentary including interviews with Lewinsky and Starr, billed as an exploration of “the origins of today’s political chicanery and tribalism.”

It’s easy to cast Starr’s legacy as one of futile combat, but that’s cheap and inaccurate. Starr claims that his investigations, however flawed, resulted in a stronger mechanism for accountability on all sides and have put the latest special counsel, Robert Mueller, in a better position to conduct his investigation.

Then there are the disciples of Starr who have risen to the highest ranks of government. Rod Rosenstein, now the deputy attorney general, worked for the Office of the Independent Counsel. So did Alex Azar, secretary of health and human services. Trump’s nominees to the federal bench include Karin Immergut, who questioned Lewinsky before the grand jury, and Amy St. Eve, who prosecuted Whitewater investors Jim and Susan McDougal for fraud.

Another reason Starr is glad he voted for Trump: Brett Kavanaugh, who investigated Vince Foster’s suicide and helped write the Starr report, is on the cusp of confirmation to the Supreme Court.

“Ken Starr is, in fact, a hero,” Kavanaugh said in November 1999, during a tribute to his mentor. “Doing the right thing, doing the hard thing, doing it very well, enduring the attacks. … He taught us, in our office, what it means to be the man in the arena.”

Starr’s sense of duty, inspiring to those on his team, was blinding to those in his crosshairs. In the book, Starr depicts Susan McDougal — who served prison time for her conviction — as a disdainful abettor of the Clintons, a designation that baffles her to this day.

“When you are cloaked in righteousness, it’s hard to listen,” McDougal says by phone from Little Rock, Arkansas. “I think he’s still trying to plead his case. And I don’t believe anyone believes it.”

Starr has heard it all before and follows his own advice: Be strong. Shut out the noise. Act with integrity. His stalwartness, though, was tested again in 2016, when he was fired by Baylor University amid an investigation into the school’s mishandling of sexual assault cases.

“It’s a matter, OK, admittedly, of personal pride: I was fired as president but resigned as chancellor,” Starr says. “And I wasn’t fired for cause. And that’s just a matter of truth. And, obviously, vanity.” The end of his tenure there, nearly coinciding with the end of the Clinton era, freed him to write “Contempt.”

And then last Christmas Eve, at a restaurant in Manhattan, Ken Starr finally met Monica Lewinsky. Her family had just finished caroling in Gramercy Park, and his was wrapping up an early dinner before church.

How do I know him? she thought.

She bears a remarkable resemblance to Monica, he thought.

Here is the man who turned my 24-year-old life into a living hell, she thought.

This could be awkward, he thought.

She says they shook hands. He says they didn’t. In a Vanity Fair essay, she described his demeanor as “almost pastoral,” somewhere between “avuncular and creepy.” In his book, he describes the encounter as “pleasant but poignant.” She blames him for terrorizing her family to destroy a presidency — but out loud, she says, she simply told him she wished they’d both made different choices.

He still wants her to fault Clinton for making her “the most visible casualty” of his contempt for the law — but out loud Starr merely offered gentle well-wishes.

Starr says in his book that Lewinsky, through misguided loyalty, “allowed herself to become a tragic figure.” In reality Lewinsky, now 45, has transformed her own anguish into anti-bullying activism and seized a moral high ground. She declined through a representative to comment for this story, because why should she?

Starr, for his part, wishes that the interaction had been more meaningful. He would’ve gladly sat down with her and submitted himself to cross-examination. He has yet to run into the Clintons but would welcome the same chance with them.

“You go first,” he would say, and then he would listen with the calm of a man who already knows how he’ll respond.