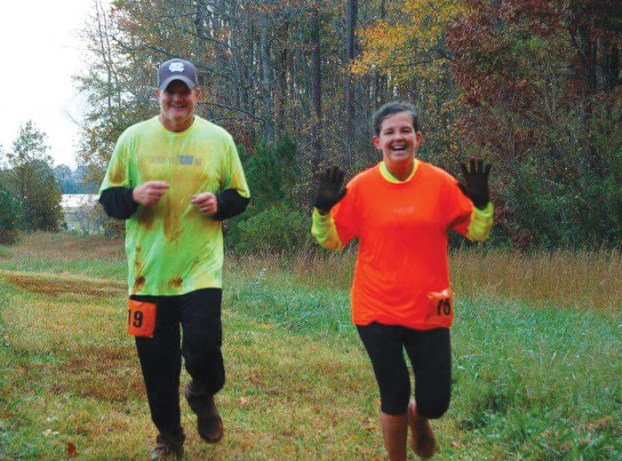 Dave and Anne May make running and racing together work. Submitted photo.

Anne and Dave May race each other and make it work
There are lots of couples that both run but there aren’t many who race each other just about every weekend. Anne and Dave show up at most local races and are just flat fun to be around. I don’t think I have ever seen a couple who both enjoy racing so much. So I decided to find out more about them.
I usually have two questions for most runners. “How did you get started?” to all those who regularly are seen running and “How is your running going?” if I haven’t seen them lately or have doubts that they still are running.
Anne answered question one with, “I started running in 1996 to lose the remaining baby-weight after having my daughter in 1994. Dave began running when we went to NY to run the Utica Boilermaker 15K and I talked him into running the 5K training run.”
I asked why racing works so well for them and why they are so competitive with each other. Anne said, “At first I had running and Dave had golf. We were trying to find something to do together. We found out that I’m horrible at golf but he can run. Deep down, we are not really that competitive with each other. Ok, maybe I am! I’m more of a long-distance runner and love half marathons. He loves 5Ks and he’s a better runner with the short distances. So whenever I’m lucky enough to beat him in a 5K…that’s fun for us (or me)! He will swear he beat me in the Rock n’ Roll San Antonio Half Marathon but there’s a photo finish of me beating him and he won’t let me live it down.”
It sounds to me like they really are competitive! I always enjoy seeing one of them coming to the finish line, usually not too far ahead of the other. If Dave wins, he just quietly moves on through the finish area. If Anne wins, it is a different thing entirely. She might jump around and always celebrates with a big smile. But they both end up smiling, even if Dave has to suffer through a little ribbing.
The Mays have been married 20 years after sealing the deal on Sept. 3, 1998. Anne left New York and became a Military Police officer in the Army and has lived in New York, Alabama, Arkansas and Florida. She has worked for the Rowan County Department of Social Services for the last 11 years.
Dave has been a China Grove boy all his life. He met Anne when both worked at Hitachi Metals in China Grove. Dave has worked at Cozart Lumber for the last 11 years.
Anne’s favorite races are her first half marathon, the 2002 Rock n’ Roll Virginia Beach Half Marathon, and her first (and only) marathon, the 2004 Cincinnati Flying Pig Marathon. She really enjoyed the scenery in Oregon and West Virginia races.
Dave’s favorites are the 2009 Rock n’ Roll San Antonio Half Marathon and the Daytona Beach Half Marathon in 2013 because they started at the speedway, ran to Daytona Beach and finished back at the speedway. Dave also enjoyed the 500 Festival Mini-Marathon in Indianapolis because they got to complete a lap on the speedway. Both Anne and Dave kissed the famous finish line bricks.
Anne said, “We were planning a trip to Ireland for our 20-year anniversary. Why not try and find a race to run while we are there? We found the Rock n’ Roll Dublin Half Marathon. We had done the same thing for our 15-year anniversary when we ran the Kaua’i Half Marathon in September 2013.”
Their biggest benefit from running was easy. Anne said, “Maintaining our weight. We are not dieters by any means and running helps to keep our weight down. Our daughter, Brianna, introduced us to Crossfit Mountain Island and we began going 2-3 times a week. We fell off in August with the trip to Ireland but are trying to regroup for September. We work to make better choices at home and eating out. In total, Dave has lost 18 lbs and I’ve lost 10 lbs since March.”
Several fun races are coming up. This afternoon at Mooresville High School is the T’Man’s 5K, bringing awareness to teen suicide. Next Saturday at Grace Lutheran Church is the Clean Water 5K.
Look for these and plenty more races at www.salisburyrowanrunners.org
You will probably get to see Anne May trying her best to beat Dave. He won’t really mind if she does.

By Susan Shinn Turner For the Salisbury Post ENOCHVILLE — Bubba and Megan McLaughlin are finally living happily ever after.... read more