Harris has 3 TDs in first start as Duke beats Baylor 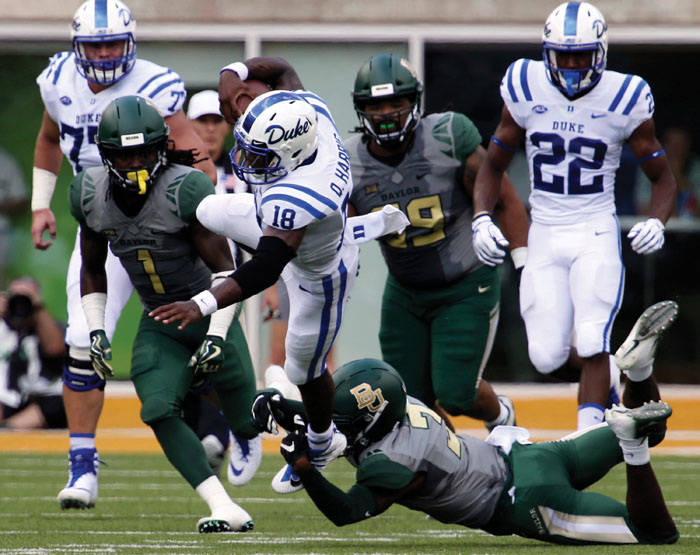 WACO, Texas (AP) — Quentin Harris threw for 174 yards and three touchdowns in his first career start for Duke, and the Blue Devils won 40-27 at Baylor on Saturday while their home state of North Carolina was being inundated with rain from Tropical Storm Florence.

The Blue Devils (3-0) traveled to Texas on Thursday, a day earlier than usual to get out before Florence made landfall along the Carolina coast as a hurricane.

T.J. Rahming caught two of Harris’ scoring strikes (28 and 7 yards) and Johnathan Lloyd had a 66-yard TD catch. Harris, a fourth-year junior who was 12-of-30 passing, started in place of the injured Daniel Jones, who fractured a clavicle last week and is out indefinitely. Jones had started 27 straight games for the Blue Devils.

JaMycal Hasty returned a blocked punt for a 33-yard touchdown for Baylor (2-1), the first time a Bears player had done that since Braelon Davis against North Texas in 2004.

Duke took full advantage of Baylor’s two turnovers. Deon Jackson scored on a 31-yard fumble return in the first quarter, and Leonard Johnson put the game away with a 53-yard interception return for a touchdown with less than four minutes left.

Charlie Brewer threw for 175 yards and rushed for two touchdowns for Baylor. Jalan McClendon added 95 yards through the air, including a 25-yard TD to Tyquan Thompson, and was the leading rusher for the Bears with 51 yards.

Duke: The Blue Devils are 3-0 for the second consecutive season, the first time they have done that since 1987-88. They did so by playing nearly mistake-free football, other than the blocked punt Baylor returned for a touchdown. Duke also didn’t have a penalty.

Baylor: This represented a step up in competition for the Bears, and they didn’t appear to be ready for it. They squandered both scoring chances in the first half with a missed field goal of 44 yards and a blocked one from 47 yards out. Baylor didn’t reach the red zone until the second half.

MADISON, Wis. (AP) — Squally Canada ran for 118 yards and two touchdowns and BYU handed mistake-prone Wisconsin its first nonconference home loss since 2003, giving the No. 6 Badgers fits with its motion offense in a 24-21 victory Saturday.

The Cougars (2-1) tossed in a trick play, too, when receiver Aleva Hifo found open tight end Moroni Laulu-Pututau for a 31-yard touchdown pass in the second quarter.

Wisconsin (2-1) had one last chance to avoid an upset with a drive that started with 3:55 left at the 8. But normally reliable senior kicker Rafael Gaglianone’s 42-yard field goal attempt to tie with 41 seconds left went wide left.

“BYU! BYU!” yelled the small contingent of Cougars fans in the stands. BYU’s last victory over a top-10 team came in 2009 with a 14-13 win over third-ranked Oklahoma.

“We just wanted to win the line of scrimmage and be physical,” coach Kilani Sitake said.

The Badgers’ 41-game nonconference winning streak — the longest active in the nation — came to an end. Their hopes to make the College Football Playoff probably did, too.

Skyler Southam’s 45-yard field goal with 9:58 left, set up by Canada’s 46-yard run on the first play of a five-play drive, gave BYU the lead for good, 24-21. The Cougars followed the Badgers’ blueprint, punching right back after Wisconsin tied the game at 21 on Taiwan Deal’s 5-yard touchdown run.

Deal rushed for two short scores. Star sophomore Jonathan Taylor had for 117 yards on 26 carries, but Wisconsin couldn’t hit many big plays against a defense that was giving up 156 on the ground coming into the afternoon.

The Badgers also sputtered for much of the day through the air.

Alex Hornibrook was 18 of 28 for 190 yards, throwing an interception deep in Wisconsin territory on the team’s opening drive of the second half. Canada scored his second touchdown of the day on the next series.

Hornibrook did his best work on Wisconsin’s final possession with short passes over the middle and a 16-yard scramble to get the team to the BYU 26.

The Badgers gained just two yards the rest of the way, and Gaglianone missed after BYU called two timeouts.

Tanner Mangum was 12 of 22 for 89 yards, but deftly operated an offense that used spread formations, motions and sweeps to find holes against Wisconsin.

Hifo ended up having the biggest pass on the trick play.

“That was a big momentum boost. It gave us a lot of confidence,” Mangum said.

It was quite a bounce-back performance for the Cougars a week after losing to California. A hot-and-cold offense has looked good in road wins against Arizona and Wisconsin, but struggled in the second half last week against Cal.

“We’ve got to learn from this one and move forward,” Chryst said.

BYU: The Cougars set the tone early by keeping the young Badgers’ defense on their heels.  BYU lost starting outside linebacker Andrew Van Ginkel to a right leg injury in the first quarter. The Cougars played with confidence in a tough road environment a week after a sluggish second half against California, when they managed just 94 yards. BYU more than doubled that output in the first half alone against Wisconsin with 222 yards of total offense.

Wisconsin: The Badgers have first-year starters at cornerback, outside linebacker and defensive end. BYU exploited the defense with jet sweeps, though Wisconsin has also used that play for big gains so it’s not like the defense hasn’t seen it in practice. Wisconsin also had a few missed tackles early in the game, including two by normally surehanded inside linebacker Ryan Connelly.

Clemson forges ahead, to play game as storm looms