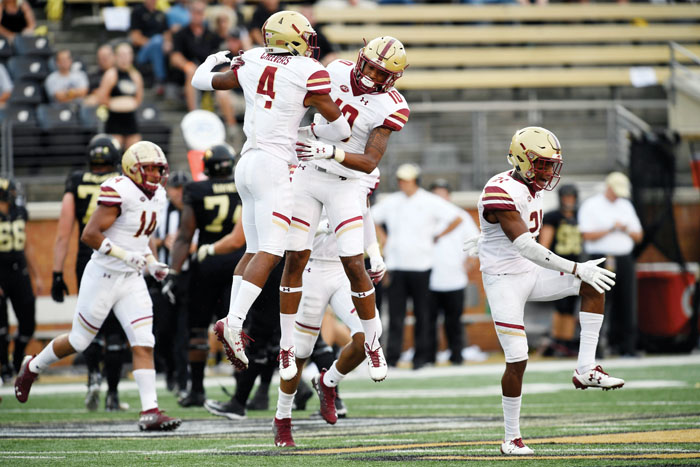 Brown threw two of his career-high five touchdown passes to Jeff Smith, and BC defeated Wake Forest 41-34 on Thursday night in a game that started two hours early with the hurricane approaching.

Brown sensed that Wake Forest was determined to not let AJ Dillon, the ACC’s leading rusher, run wild by creeping its safeties closer to the line of scrimmage.

He did anyway: Dillon finished with 185 yards rushing and scored a 45-yard touchdown on the third play from scrimmage.

“We knew we wanted to throw the ball tonight, and we knew there would be opportunities in the play-action game because the safeties would be violently coming into the box” to counter Dillon, BC coach Steve Addazio said.

Freshman Sam Hartman was 20 of 45 for 214 yards with two touchdowns and two interceptions for the Demon Deacons (2-1, 0-1). His 5-yard score to Jack Freudenthal with 1:33 left made it a seven-point game, but White recovered the ensuing onside kick.

Matt Colburn rushed for 117 yards with a 2-yard touchdown run, Malik Grate recovered a blocked punt in the end zone for another score, and Nick Sciba kicked two field goals for Wake Forest.

Kickoff was moved up to the early evening in an attempt to beat the oncoming, 400-mile-wide storm that was creeping toward the coast some 200 miles from Winston-Salem. While there were occasional gusts of wind blowing across the field, it was a rain-free night with the first half played in sun conditions.

Boston College: The Eagles entered the season as a trendy potential challenger to No. 2 Clemson in the ACC’s Atlantic Division. With Brown turning play-action passes into long touchdowns, BC is off to its best start since it was 8-0 in 2007 — the year the Eagles climbed to No. 2 in the AP Top 25 and made the first of two consecutive league championship games.

“Honestly, we started preparing for this game in the summer,” Brown said. “It was just a feeling of relief, to finally get to this game.”

Wake Forest: This one will sting the Demon Deacons, who had this game circled for months as their opportunity to establish themselves as division contenders. Instead, the secondary’s knack for giving up long touchdown passes — Tulane hit on two 50-plus-yard TDs in the opener — wound up costing them.

“Our eyes were in the wrong place,” coach Dave Clawson said. “It isn’t getting better. It’s getting worse.”

Dillon cracked triple figures in rushing for the seventh time in eight games dating to last season. BC improved to 8-2 in the 10 games since he took over as the starter midway through 2017.

Brown surpassed his previous career bests of 279 yards passing and four touchdowns, both set two weeks ago against Massachusetts. “That’s what a big-time player should do, and he did it,” Addazio said about Brown.

Wake Forest entered having allowed one sack in two previous games, but Hartman was brought down four times by a BC defense that was averaging 3 1/2 sacks. … Smith finished with six catches for a career-best 145 yards.

These schools played a 3-0 game three years ago in Boston. This was the exact opposite of that — the highest-scoring game in a series that dates to 1941. It surpassed the 65 combined points scored in 2005, a 35-30 win by BC.

Wake Forest: Plays host to No. 8 Notre Dame next Saturday.