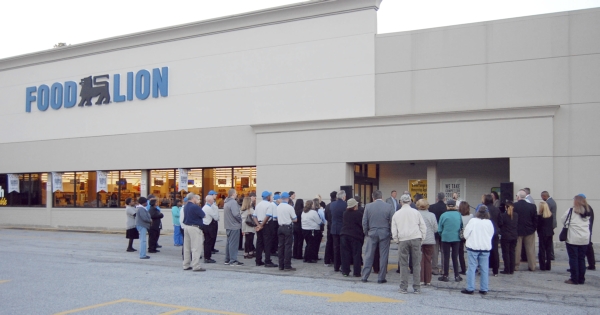 Salisbury-based Food Lion celebrated the grand reopening of 142 stores in the greater Charlotte area at the Food Lion at 123 Mahaley Ave. in 2016. Amanda Raymond/Salisbury Post

RALEIGH — North Carolina’s economy is in reasonably good shape. Over the past five years of available data, our state’s employers have added 480,000 net new jobs, with our job-creation rate exceeding the national and Southeastern averages. North Carolina’s average income per person has gone up faster than the national and regional averages, as well, while our growth in gross domestic product has, after adjusting for inflation, beaten the regional average and matched the national one.

That doesn’t mean every North Carolinian who wants a full-time job can find one. It doesn’t mean all North Carolinians have equal access to economic opportunities. Perfection is impossible in any human endeavor, of course. But even if we confine our expectations to the realm of the possible, it is certainly possible for North Carolina’s economy to be healthier than it is.

More to the point, our economy would be better off if more people were starting more new enterprises in North Carolina — and growing them rapidly. Among the 25 largest states in the country, we rank a pretty good 9th in startup activity but only 18th in entrepreneurial growth, a measure from the Kauffman Foundation that assesses how much and how quickly new companies expand.

I suspect you agree with me that more economic progress is needed in North Carolina, and that fostering entrepreneurship is particularly important. It’s when we turn to solutions that the disagreements arise, and all too often degenerate from substantive debate to political shouting matches.

Conservatives think the answer lies in continuing to lower the cost of doing business in our state while increasing the real-world return on the dollars North Carolinians already spend on schools, highways, public safety, and other government functions.

Progressives think the conservatives’ focus on cost is misguided — that if policymakers raised taxes or increased regulatory costs for the right reasons, to deliver higher-quality services or better production of public health and safety, North Carolina’s economy would grow faster and offer more opportunities to more people.

As should be obvious by now, I think the conservatives have the better argument. It has more research support from peer-reviewed studies that explore which factors most influence state and local economic growth. The most important factors, frankly, don’t have much to do with politics. Geography is immensely important. So are technological and organizational changes within private industry.

Regarding public policy, however, most peer-reviewed studies published on the subject since 1990 found a negative association between the cost of government and economic growth, although sometimes the effect was modest. Meanwhile, most studies found no link between growth and government expenditure, including education and infrastructure spending.

So, to the extent North Carolina politicians can shape economic growth, they should primarily employ the tools of fiscal conservatism, not fiscal progressivism. Keep taxes and annual spending growth under control. Weed North Carolina’s regulatory garden, keeping the rules that confer more social benefits than costs while pulling out, not just trimming back, the others.

What about government programs that offer technical assistance or even direct incentives to businesses? Whatever you think of their effect on business recruitment, these policies are poorly suited to the task of fostering business starts. In a new paper published in the Journal of Entrepreneurship and Public Policy, Southern Methodist University scholars Meg Patrick Tuszynski and Dean Stansel found that “economic development incentive programs are unlikely to increase entrepreneurial activity and may decrease it.”

One of the variables Tuszynski and Stansel used in their study did exhibit a statistically significant relationship with entrepreneurship: economic freedom. New businesses were more likely to form, and new patents issued, in states with smaller budgets, lower taxes and less burdensome regulations.

You may doubt the ability of conservative policies to promote entrepreneurship and thus expand economic growth and opportunity. But perhaps you better understand why millions of your fellow North Carolinians think otherwise.

Nikki Haley: When I challenge the president, I do it directly

By Nikki Haley Special To The Washington Post We have enough issues to deal with in the world, so it’s... read more