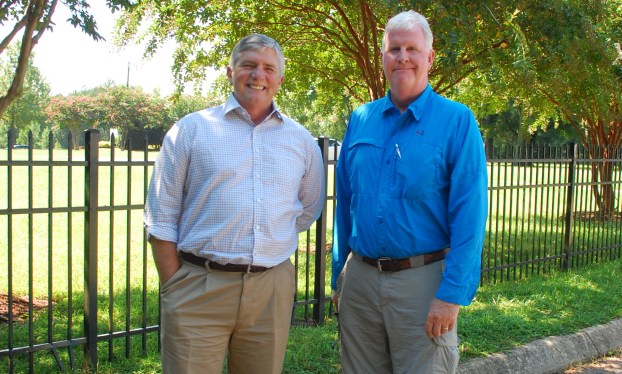 Dave Collins and Jeff Matthews, owners of Distinctive NatureScapes, stand outside their company on Main Street. On Saturday, they celebrated 20 years of operation.

Distinctive NatureScapes looks back on 20 years of landscaping

SALISBURY — Twenty years ago, Dave Collins and Jeff Matthews were friends stuck at crossroads in their careers.

On Saturday, they hit 20 years in operation for their company, Distinctive NatureScapes.

“We both were corporate people. I was vice president of a trucking business, and he was vice president in a fabric automotive carpet business,” Collins said. “We both sort of reached a time where it made sense for us to leave those careers. My company wanted me to move to Florida. I didn’t want to go. We just decided we were going to go into business, but we didn’t really know what.”

After two weeks, the two decided to combine their interests in irrigation and landscaping to start Distinctive NatureScapes. Collins and Matthews had an understanding of the fundamentals of running a business that helped them quickly launch the company.

“You have different terms for different things, but when you get to the business part of it, it’s pretty much all the same,” Collins said. “You’ve got expenses. You’ve got incomes. You’ve got to figure out ways to make sure people know who you are and what you are and have customers. We developed marketing from what we knew in the past, and we were the first ones around here to ever use yard signs to put them up in a yard.”

They spent about five years learning everything they could to get accredited in landscaping, pavements, plants, lighting, retaining walls, limited plumbing and contracting. The licensing would help them flourish.

“What that does is let you do larger jobs, and most jobs that are over $30,000 require that you have landscape contractor license,” Collins said.

The 20-year anniversary gives them a reason to look back, but Matthews said there are similarities between the Rowan County of 1998 to the county today.

“A lot of things I’ve thought about recently when we started in ’98,” Matthews said. “It was kind of the upswing in the economy from a little bit of a recession. Rowan County at that point in time was growing. It was the end of the presence of the textiles industry, and furniture was negative. Residential development was big.”

“People were moving into the Salisbury-Rowan area, which was fortuitous for us, obviously, because there was business opportunities,” he added. “Over the course of the next several years, it’s been badly flooded and the county is trying to figure out how to get themselves in the right direction again.”

Collins said like other businesses, NatureScapes was affected by the economic ups and downs.

“In our business, the economy plays a big role on people’s spending,” Collins said. “When the economy is doing well, you know people want to do more things with what they have. When the economy tightens up, it becomes a little different.

“We have been very, very fortunate, really, in two recessions. Of course, the big recession in 2008 was particularly hard. There have been a couple of other blips in there that made for changes,” Collins said. “The fact that we had long-term relationships with people. We had employees that were here with us. Even though it might have been a bit difficult at the time, we didn’t lay anybody off. We didn’t change anything we were doing in terms of our employee relationships or our business relationships other than to adapt to the economic aspect of doing business with them.”

Distinctive NatureScapes has done a variety of commercial and residential projects, including installing a labyrinth design for a patio, sodding the Salisbury National Cemetery expansion and creating outdoor learning spaces for Shive Elementary School and Salisbury Academy.

“It was a blank paper,” Matthews said. “The PTA had some ideas, but we helped congeal that. It’s a learning space. It’s a reading, relaxation space. They can have meetings in that area for whatever they wanted to. Everything was made a kid-level height so they can sit on the raised walls. Those are the great kind of projects to work on.”

The two said they use a lot of old-world techniques with modern materials and travel a lot to be inspired and stay up to date on trends.

“The title of our tagline is if we can dream it, we can build it, and we do,” Collins said. “We pull from a lot of things.”

With every project and every year, Distinctive NatureScapes has evolved to fit the needs of the community. Matthews said he wants leaders to understand the changes.

“How we as a community continue to embrace change and grow will directly impact a lot of small businesses, and I just hope that civic leaders and others will see the vision and opportunity that exists here.”

To learn more about Distinctive NatureScapes, visit www.distinctivenaturescapes.com or call 704-630-0007. The company is at 3870 S. Main St.