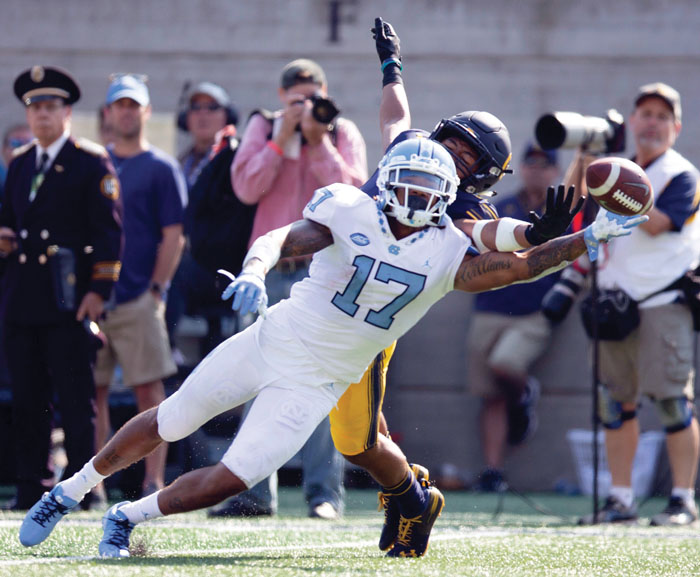 The Golden Bears defense that forced four interceptions and only allowed a field goal through three quarters more than made up for it.

Patrick Laird rushed for one touchdown and caught another, Cal’s defense took advantage of a rocky outing from North Carolina quarterback Nathan Elliott, and the Bears held off the Tar Heels 24-17 on Saturday.

Cameron Goode had one of four interceptions for Cal and scored on a 38-yard return before leaving in the fourth quarter with a possible leg injury. Cornerback Jaylinn Hawkins had two picks.

Cal’s defense came up big on a day when the Bears rotated three quarterbacks all afternoon — often during the same series — and were limited to 119 passing yards.

Ross Bowers started for the Bears but was in and out of the game. Chase Garbers threw for one touchdown while Brandon McIlwain also split time running the offense.

Laird plodded his way to 95 yards on 29 carries. He had a 3-yard touchdown run in the first quarter and caught a 4-yard touchdown pass from Garbers in the third.

“Turnovers and penalties, that’s the game right there,” Tar Heels coach Larry Fedora said. “Self-inflicted wounds is what those are.”

The Tar Heels trailed 24-3 before scoring a pair of touchdowns in the fourth quarter.

After Elliott’s 14-yard touchdown to Ratliff-Williams with 1:13 remaining cut the lead to 24-17, North Carolina appeared to recover an onside kick but the Tar Heels were called for an illegal block. Cal recovered the next try.

Elliott, who started the final three games in 2017, completed 15 of 35 passes for 144 yards and one touchdown but couldn’t overcome the turnovers.

“Whether you get pressure or not you have to make the right decision,” Fedora said. “If you turn it over like we did you’re going to have a hard time winning the game.”

North Carolina: The Tar Heels showed some fight late but have a lot of work to do offensively. Elliott struggled all afternoon and had multiple communication issues with his receivers. Defensive end Malik Carney lost his cool early but came back and was Carolina’s most effective player the rest of the way.

California: Looked crisp defensively across the board, especially in the secondary, but will get a better litmus test next week against BYU. The passing game sputtered quite a bit, which could be expected when shuffling quarterbacks in and out.

California: The Bears go on the road to play a night game at BYU on Saturday.

The Buckeyes shook off Meyer’s first absence from the Ohio State sideline in six years, scoring on five on the first six possessions and overcoming some defensive sloppiness.

Meyer will be allowed to return to practice Monday, although his suspension by the university will last for two more games. He was sanctioned after an investigation showed he mismanaged former assistant Zach Smith, who was accused of domestic violence and other bad behavior.

CLEMSON, S.C. (AP) — Freshman Trevor Lawrence threw three touchdown passes and Clemson scored on all five of his drives in the season-opening rout.

Lawrence was going 9 for 15 for 137 yards and no interceptions, and senior starter Kelly Bryant was 10 for 16 for 127 yards and a touchdown and ran five times for 44 yards and another score.

The Tigers’ front four on defense — who may all end up as NFL first-rounders — dominated Furman’s option attack. The Paladins gained just 163 yards and the one touchdown came with 1:18 left after Clemson emptied its bench on a steamy afternoon.

Georgia flashed big-play potential, including a 59-yard touchdown pass from Fromm to Mecole Hardman and a 72-yard scoring run by Demetris Robertson, who was making his debut.

Fromm completed 12 of 16 passes for 157 yards, including a 10-yard scoring pass to Riley Ridley.

Murray connected on 9 of 11 passes in just under one half. The first-round Major League Baseball draft pick also ran for 23 yards on four carries. It was Murray’s second college start since transferring from Texas A&M after the 2015 season.

ATLANTA (AP) — Jatarvious Whitlow ran 10 yards for a touchdown with 6:15 remaining and the Auburn defense came through at the end, leading the Tigers in the opener.

Trailing 16-15 after missing a two-point conversion on their opening drive of the game, Auburn drove 76 yards in 10 plays for the winning score. Jarrett Stidham kept the drive going early with a 12-yard pass to Chandler Cox on third-and-9.  Then, facing third-and-7 deep in Washington territory, Auburn handed off inside to Whitlow, who knocked over a Washington defender as he smashed into the end zone.

LOS ANGELES (AP) — JT Daniels, the second freshman to start at quarterback in a season opener for Southern California, threw for 282 yards, and had a 43-yard touchdown pass to Amon-Ra St. Brown.

CHARLOTTE (AP) — Will Grier got his Heisman Trophy campaign off to an impressive start, throwing for 429 yards and five touchdowns to help West Virginia rout Tennessee in a game delayed for more than an hour at halftime due to lightning.

Grier connected on touchdown passes of 33 yards to David Sills, 28 yards to Gary Jennings, and 14 yards to Kennedy McCoy in the third quarter as the Mountaineers opened a 33-14 lead.

Grier, who grew up in the Charlotte area and once threw for 10 TD passes in a high school playoff game, was 14 of 19 for 275 yards and four TDs in the second half. Sills had seven grabs for 140 yards and two touchdowns after 18 TD receptions last season.

Tim Jordan ran for 118 yards on 20 carries and a touchdown for Tennessee, which lost in Jeremy Pruitt’s head coaching debut.

TROY, Ala. (AP) — Brett Rypien passed for 305 yards and four touchdowns, and Sean Modster had 167 yards receiving, to lead Boise State in the opening victory.

The Broncos raced to a 35-7 halftime lead over a Trojans team coming off an 11-win season, largely with the Rypien-to-Modster connection. Then, Tyler Horton and Boise State’s defense mostly took over the scoring for the second half against Troy.

The cornerback scooped-and-scored on a pair of fumbles, with returns of 55 and 11 yards. Horton, who has four defensive touchdowns, tied the FBS record for fumble returns for TDs in a game shared by four others.

Rypien passed for 276 yards and four touchdowns in the first half, with Modster easily topping his career high by the break. He had 161 receiving yards in the half against Troy. Rypien completed 20 of 28 passes and Modster did his damage on seven catches.