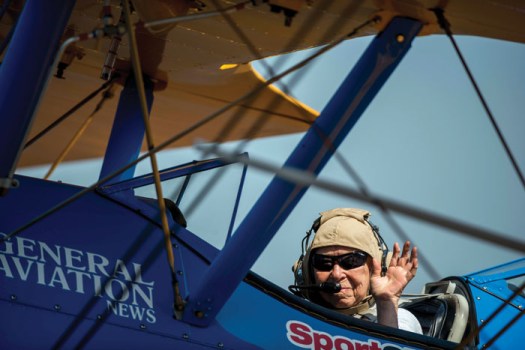 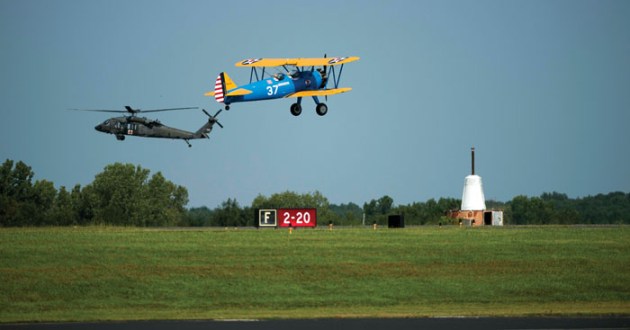 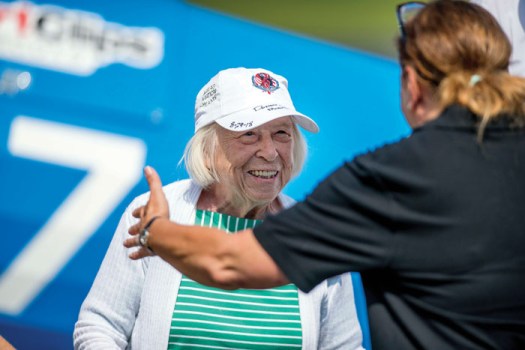 Donna Boughton is all smiles after her flight. Jon C. Lakey/Salisbury Post 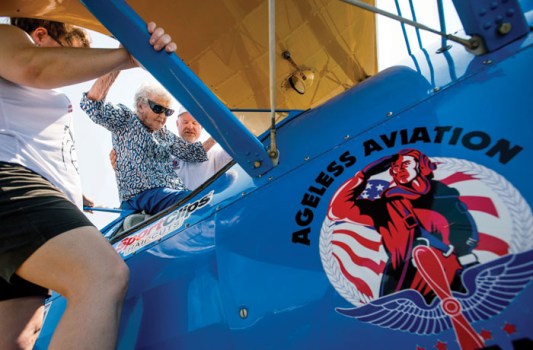 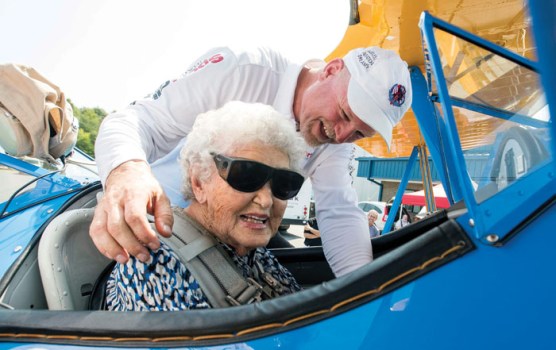 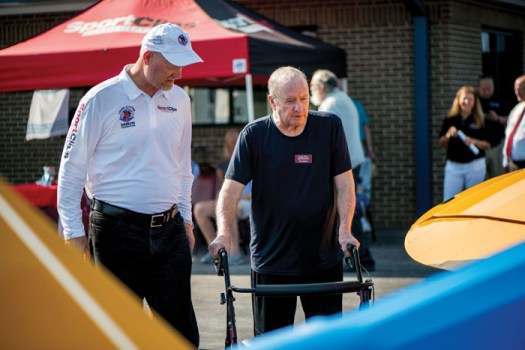 May 25 was a day of steady rain. Local veterans from Oak Park Retirement didn’t get to experience the annual Memorial Day weekend dream flights they have come to love.

On Wednesday morning, a blue and yellow 1941 Stearman biplane again graced the skies over Salisbury as Ageless Aviation founder and chief pilot Darryl Fisher of Carson City, Nevada, made good on his promise to return.

Veterans or widows who have never flown with the organization got priority. Oak Park residents who met the criteria joined Fisher and crew chief Kevin Erker at Mid-Carolina Airport for what some thought could be a rough ride.

“Do you have a barf bag just in case?” Mary Austin asked.

Someone else shouted, “Pray for the person going next.”

Fisher assured everyone that they would be just fine.

Longtime Salisbury car dealer Don Mays, a 77-year-old Air Force veteran, was the first to fly. He served as a jet mechanic and spent time training pilots headed to Vietnam.

Mays remembered hearing that President John Kennedy had been shot amid the Cuban Missile Crisis, and his crew went immediately on alert, sleeping in a plane for two days so they could depart quickly if needed.

As Fisher and Mays walked toward the Stearman, Mays said, “I bet I could land it if I had to.”

After deplaning, he said, “I want to go again. The flight was one of the best things of my life.”

Mays’ son, Scott, was on hand for the flight.

Murray Cross, originally from Alabama and a Navy veteran, got to fly next.

“I learned more in three years in the Navy than I did in school,” said Cross, 85. “I had lots of good memories of my service transporting Marines on a (tank landing ship) near Jacksonville, N.C., and in Puerto Rico. A boatswains mate, Cross served from 1951 to 1954 during the Korean War.

Eager to get going on the flight, Cross almost made it to the cockpit himself before he needed help to get strapped in.

After the flight, Cross said, “I was very comfortable the whole time. I loved it!”

Donna Boughton, 93, was a cadet nurse during World War II. By the time she graduated with her nursing degree from the University of Michigan, the war was over.

“I did go on to serve at Walter Reed Army Hospital later, where I took care of wounded soldiers who had returned from the war,” said Boughton.

Boughton’s husband was a Seabee during the war, and they lived in New York City and Washington before moving to this area. She was joined at the airport by her daughter, Lisa, and had been anxiously anticipating the flight for a week.

“It was nice to see all the area from the air,” Boughton said after her flight. “I missed Oak Park, though.”

Full of one-liners and a quick wit, Mary Austin grew up in Long Island, New York. Now 94, she worked along with her future husband in an atomic research facility on the island during World War II.

Austin supervised the record keeping section for 3,500 employees while her future husband ran a neutron generator. Jerry Austin was a Navy captain.

As late as Thursday, Austin was ready to back out of the flight. Oak Park Activities Director Karen Leonard and a maid helped her get ready Wednesday morning, unwilling to take no for an answer. As she watched Boughton return from her flight, Austin said, “Oh God, my stomach has butterflies. I have arthritis, but I’m not chicken. I’m going flying.”

Austin enjoyed her flight and her time with Fisher. She thought her flight was longer than others, but when told it was not, Austin replied, “I thought you favored me. Now did you say your wife is back in Nevada? You are a fantastic pilot.”

“Its just simply amazing to experience these veterans as they fly in our planes,” Fisher said “We often find that the nervous flyer has a quickened step when they get off the plane. We strive to make the dream flight a memorable family experience, but often it is our volunteers who leave with the sense of having received a remarkable gift from serving these great men and women.”

“Our residents look forward to this day each year,” said Leonard. “It has become such a tradition that other nonveterans come out to watch. Our group that planned to fly back in May couldn’t return but every one of these fliers had a great day.”

Sport Clips, the primary sponsor of the Ageless Aviation Dreams Foundation, had two staff members on hand providing assistance into and out of the plane and snacks throughout the day. Both were attending for the third time.

“Each time is like the first time,” said stylist Frances Gray. “Each veteran lights up like a Christmas tree after they fly. We love our veterans.”

Airport Director Kevin Davis made sure everyone was comfortable throughout the warm day.

“The airport staff always gets excited about this event,” Davis said. “We are so happy to support what Ageless Aviation does with the veterans. They made our freedom possible, and we get this chance to pay back just a small portion of our great debt to them.”

Crew chief Kevin Erker may have summed it up best when he heard Austin’s comment about butterflies building.

“Maybe at this point, this is the very best thing that we can do for these veterans,” said Erker, a retired Marine Corps lieutenant colonel and fighter pilot. “Butterflies and the sense of accomplishment after — what could be better?”

Find out more about Ageless Aviation Dreams Foundation at www.agelessaviationdreams.org.