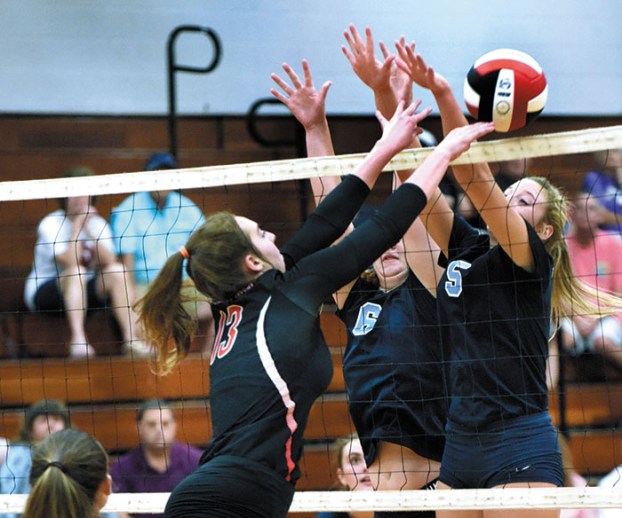 Wayne Hinshaw / for the Salisbury Post South’s Kira Rymer, 13, returns the ball over the net against West’s Emma Gusler, 6, and KK Dowling, 5.

Prep Volleyball: West off to 7-0 start

LANDIS — West Rowan returned to volleyball prominence in 2017, finishing 20-7 and with MaxPreps rankings of 12th in 3A and 32nd in the state for all classifications.

The Falcons subtracted all-county players Braelyn Faust (Lenoir-Rhyne) and Madi Myers (William Peace) who will be starting their freshman college seasons this week, but coach Jan Dowling believes this year’s team can continue its upward flight in the competitive Piedmont, an area that, more often than not, produces the best team in the western half of the state.

“We’ve got kids who are really getting after it and we’ve got kids playing for each other with great chemistry, and when you’ve got that going for you, things can be pretty great,” Dowling said. “We lost some very solid players, but we’ve added a talented freshman (Kelcie Love, the sister of UNC pitcher Austin Love) and our returning players have put in the time in the weight room. They’re a lot stronger. They’re jumping higher. They’re better.”

North Iredell, which beat West four times last season, is the defending 3A state champ and also was runner-up in 2011-12. Cox Mill won 3A in 2016, and South Iredell grabbed the 3A crown in 2015. Carson was 3A runner-up in 2012-13. So if you’re the best in this high-flying neighborhood, there’s a reasonable chance you’ll be the best in 3A.

That’s West goal for this season, although you can be really strong and still finish fourth in the six-team North Piedmont Conference. Carson (5-0), North Iredell (3-1) and South Iredell (4-1) loom as marquee matchups for the Falcons in the weeks ahead. Statesville (2-4) and East Rowan (3-1) aren’t bad.

“There are no gimmes in our league,” Dowling said. “And we’ve scheduled the toughest non-conference schedule that we could. We were looking to play teams that are always in the playoffs. That’s why we played Alexander Central and that’s why we’re playing at Forbush this Thursday. We played Lake Norman for the first time in a while.”

School started Monday, but the Falcons already are 7-0.

“She’s such a leaper, there just aren’t many people who can go up with her,” Dowling said. “When you’ve got an athlete like that who also has a high skill level, you’ve got a special player.”

KK Dowling, a sophomore who is the coach’s daughter, had 11 kills and 11 digs on Monday.

“KK has always been the smallest kid on every team, but she finally hit a growth spurt (to 5-9) and 3 inches and 25 pounds make a big difference,” Coach Dowling said.

“South Rowan is strongest in the middle, but Carly and Kelcie were a huge presence,” Coach Dowling said. “We don’t have any 6-footers, but we’ve got pretty good team size. Everyone is pretty level.”

South got six kills from Janiya Downs, the reigning Rowan County Athlete of the Year, nine assists from Anna Rymer and six digs from Kira Rymer.

West moves forward with a lot of confidence. A five-set win at Cox Mill last week helped that confidence. Cox Mill graduated its superstars, but it’s still a strong program.

“Cox Mill is a unique environment to play in, and we’d been playing in 90-degre heat and we go to Cox Mill and it felt like it was in the 60s in that gym,” Coach Dowling said. “We really didn’t play well, but we got the win.”