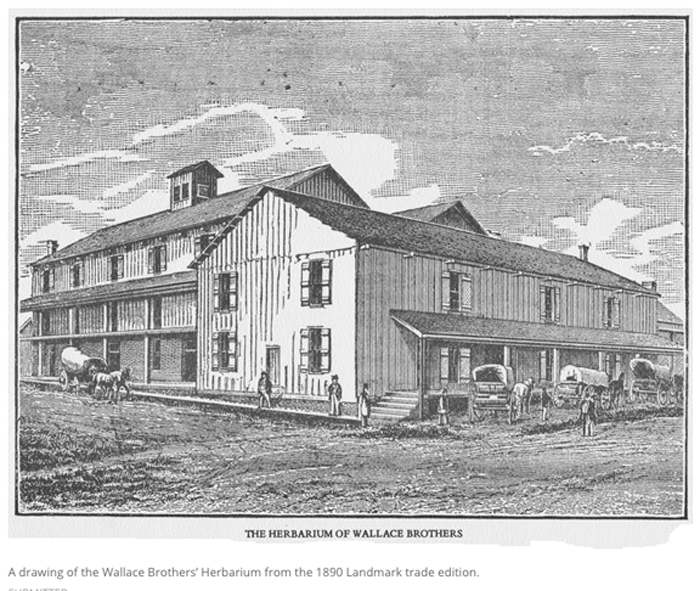 The Wallace herbarium. From the Statesville Landmark.

(ed note: Isaac and David were brothers to Salisbury’s Victor Wallace. The Wallaces immigrated to South Carolina from Hesse-Darmstadt in Germany just before the Civil War. After fighting for the Confederacy, Victor worked for his brothers David and Isaac. By 1870, Victor had moved to Salisbury, where he opened a small store of his own.  His sons Jacob and Leo later joined the dry goods business, which was renamed V. Wallace and Sons)

Next month, Iredell Museums will open The Wallace Brothers: Roots, Herbs, & Religion, an original exhibit on two of Statesville’s most successful but least-known Golden Era businessmen. The Wallace brothers, Isaac and David, arrived in Statesville right as the Civil War began and opened one of many wholesale stores in the center of town. Their mercantile exploits soon morphed into the large-scale trade of roots, produce, and herbs as medicinal commodities. Their “Botanic Depot,” as they called it, was located at the corner of Meeting and Walnut Sts and was more than 40,000 square feet at completion. Throughout their time in business, they had several storage warehouses from Court St to W. Bell St.

The brothers and their family were not only business leaders, they were also community leaders. Because of the Wallace’s success, other Jewish immigrants made their home in Statesville. To meet the needs of the new community, David and Isaac established a Jewish Congregation in their home, called Congregation Emanuel, in 1883. The congregation was made up of every single Jewish family in town. Less than ten years later, the brothers secured funding for the building of a synagogue on the corner of West End Avenue and North Kelly Street. Services at the Temple drew congregants from as far as Hickory, Salisbury, and Charlotte.

The impact of the Wallace Brothers’ success was felt all over Statesville. They supported business owners, including the Lowensteins, the Keys, and others; they were part of an effort to fund and continue the women’s college, which became Mitchell Community College; and they were fundamental in establishing the New South Cotton Mill, which employed hundreds of Statesville residents. The Wallace’s and the Jewish community always led the way in contributions to charitable causes and that legacy extends to today.

From their success in business and establishing Statesville’s authority as a center of trade to their support of the community and education, David and Isaac and their descendants helped create the Statesville that we know today. We invite you to come learn about their legacy during Art Crawl, Friday, September 14th from 5:30 to 8:30. The exhibit, The Wallace Brothers: Roots, Herbs, and Religion, will be open until Spring 2019.