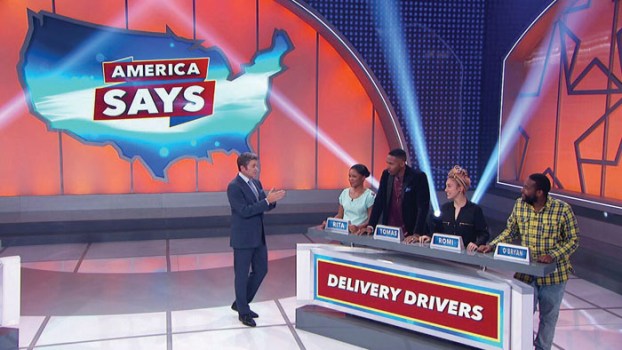 John Michael Higgins serves as host for 'America Says,' a game show airing at 5 p.m. weekdays. Salisbury native O'Bryan Neely, far right, was on a Delivery Drivers team whose episode will air next Wednesday on the GSN. Photo courtesy of the Game Show Network

SALISBURY — When O’Bryan Neely was born on March 16 more than 33 years ago, it was close enough to St. Patrick’s Day that he was bestowed a name intended to give him the luck of the Irish.

So how lucky was Neely, a Salisbury native, during his recent appearance on the game show “America Says”?

You’ll have to wait until his particular episode airs at 5 p.m. next Wednesday on the Game Show Network (GSN).

“The people watching it are going to enjoy it,” Neely said earlier this week from Los Angeles, where he now lives. “It’s the millennial version of ‘Family Feud.’ … I had an awesome time.”

“America Says” is a studio game show in which two four-person teams made up of family and/or friends compete against each other to guess Americans’ responses to survey questions.

The teams have short time periods to answer the questions, which cover a wide range of topics.

“It’s a high-energy show, fast-paced,” Neely said. “You will not get bored.”

The team with the most money banked after three rounds of responses heads to a bonus round and can win as much as $15,000.

Most of Neely’s family still lives in Rowan County, including mom Deborah Neely and grandmother Rose Neely. He attended three years at North Rowan High School before transferring to Salisbury High for his senior year and graduating in 2003.

O’Bryan moved to Los Angeles earlier this year from Atlanta to pursue his acting career. He considers a fellow actor, Salisbury native Kevin Carroll, as a mentor.

Neely was part of a team of fellow actors and delivery people called “Delivery Drivers.” They are friends who sometimes take acting classes together.

Neely had to audition for the show, and his episode was taped on the Thursday before Memorial Day.

This was Neely’s first game show, and he said he was glad for the opportunity.

“It was definitely fun for a first experience,” he said. “I would definitely suggest that people try it. I didn’t think I would have that much fun.”

Veteran actor John Michael Higgins is the host for “America Says.” He has been in numerous television shows and movies, including “Best in Show” and “Pitch Perfect.”

“Higgins is hilarious,” Neely said. “You can’t imagine (him) being that funny in person.”

The show in which Neely appears will be rerun at 1 a.m. next Thursday.

SALISBURY — It’s not often firefighters or a department’s medical responders find themselves giving oxygen to dogs and cats. But... read more