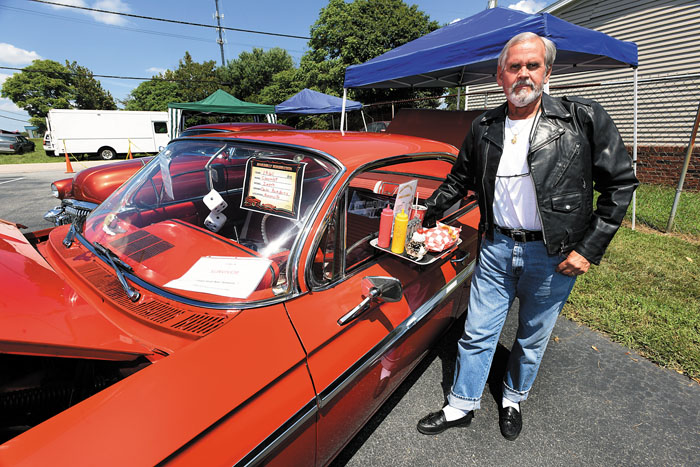 Charles Humphrey from Mooresville stands beside his 1961 Chevy Impala at the 2017 Rockabilly Resurrection Car Show in Kannapolis at the VFW Post 8989. He is dressed in blue jeans, white socks, leather jacket with a curb service food tray on his car for the 1960's Rockabilly show. Wayne Hinshaw, for the Salisbury Post

The festival will include food trucks, beer, swing dancing, vendors and a pinup pageant.

The car show has a $10 entry fee, with registration starting at 10 a.m. Judging starts at 2 p.m., and awards will be announced at 6:30 p.m. Participants must be present to win.

Eight bands are scheduled to perform, starting at 1 p.m. and changing on the hour. They include Jem Crossland & the Hypertonics, Mystery Hillbillies Trio, Slippery Jake & the Bad Brakes, Cha Chas Cadillac, Straight 8’s, the Octanes, Hillbilly Casino and Hellbilly Homicide.