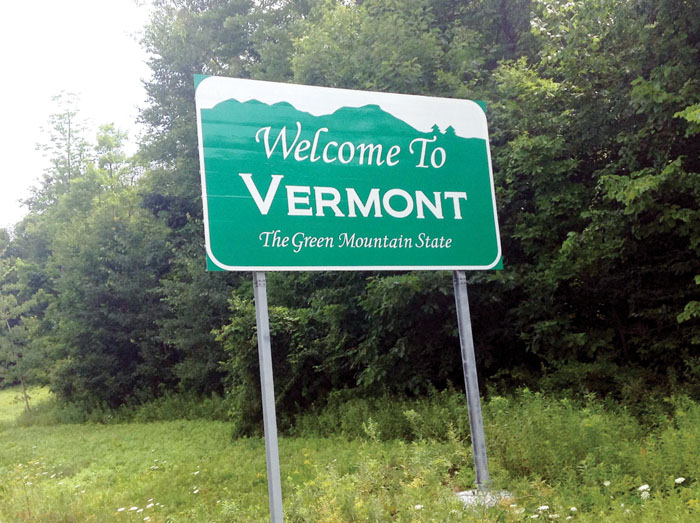 Vermont was the focus of the trip but with plenty of side trips.

While my main intent was to cycle in Vermont, all along I planned for more stops on the way home. On my long-distance cycling rides, I have a certain amount of leeway but once the cycling is over, essentially so is the trip. This trip had almost 2,300 miles of driving and only parts of three days of cycling. More like a vacation than a challenging endurance bike ride. Missing were the endless calories usually consumed on the 100-mile cycling days.

On the way home, I passed by the exit for the Antietam Battlefield in Maryland and thought about stopping. But, just as with all the trips, I made a list of things to do on my next visit.  But weighing on my mind, even from the beginning of this trip was what to do next. More on that later.

As mentioned, I do love long drives especially if there is some adventure on the other end. After hooking up with Sirius radio again, I had music and ball games for company and plenty of time to think about how this trip could be done the best way.

Vermont was wonderful, everything that I hoped for. Told at the visitors center that towns and the population were small, I knew I would enjoy it. The scenic byways are so well planned and magical that I tried to do as many as possible. The Green Mountains are just that and dominate almost every vista, even those near the water.

Once the rain began, I didn’t ride the bike as much as I had hoped. The highlights had to do with all the colorful characters and historic small towns. Vermont is aware of its history and proud to show it off. I’m glad I waited for Vermont to be the 48th state so that it could get a special emphasis. I didn’t get Vermont ice cream but did enjoy cider donuts and maple syrup cookies. My goal is to return some day and cycle to Montreal and on to Quebec City, both places that I have visited on my travels for running years ago. To do that, I might have to take the one-minute ferry ride again.

Upstate New York is almost as good. I love the endless towns that appear stuck in the late 1800s. The Baseball Hall of Fame is a can’t-miss for any fan and it has changed so much in 20 years. The Adirondacks might be more harsh than the Green Mountains and then Lake Champlain is memorable as the water in between. Fort Ticonderoga is also a can’t-miss because of the efforts of restoration that are still ongoing.

My last two major stops were the United States Military Academy at West Point and Gettysburg National Military Park. Both had fantastic new visitors centers and large crowds that included many foreigners. With new graphics and interactive media for kids to adults, the experience of both leaves the visitor with a much better understanding of the surroundings. I finally got an idea of what cadet life would have been at West Point had it all worked out.

Unusual for me was the recurring cast of characters like Ethan Allen, Abner Doubleday, George Custer and statues of Fame. I love history and was immersed in it this time, for the whole week. I met nice people nearly every day, like the family of seven from Iowa that had an extra seat for me to sit on top of the sightseeing bus for the tour of the battlefield.

Thanks to the Salisbury Post for helping me to do these trips and the great folks who help with publishing the daily updates. Along the way, I heard from quite a few new people this time from home and other areas that had knowledge of Vermont and more. I didn’t get that “Vermonster” ice cream but I am wishing I had one this afternoon.

So, the big question that I’ve been asked all day. Where to go next? I honestly don’t know but the question has been weighing heavily on my mind during the drive home yesterday, my run this morning and throughout the rest of the day. I’ve got some ideas, and of course I do still need Alaska and Hawaii for cycling states 49 and 50. Hopefully the answer comes sooner rather than later. The fire is burning. When it does, I will let you know.

So, once again, and as always, thanks for riding along!