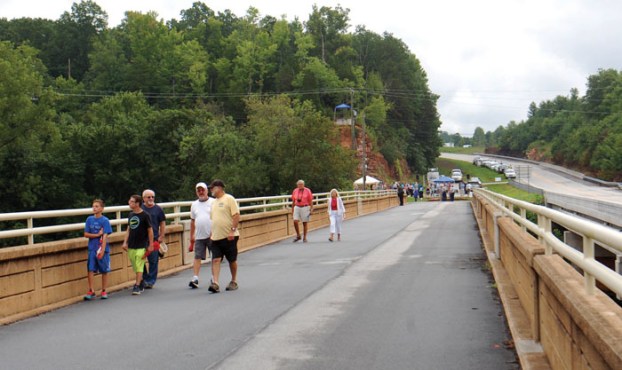 Prior to Monday's groundbreaking ceremony, visitors walk on the Wil-Cox Bridge. This photo looks toward Davidson County with U.S. 29 on the right. Mark Wineka/Salisbury Post

Hats off to Davidson County, which has developed plans for an inviting recreation area around the north end of the historic Wil-Cox bridge. The Wil-Cox was the first free public bridge to span the Yadkin River between Davidson and Rowan counties. To fully honor its history, Rowan should consider what it can do to help cultivate this treasure.

Rowan commissioners once had ambitions of doing something with the bridge. In June 2004, when Gus Andrews was chairman, Commissioner Steve Blount presented a report on a meeting he and Commissioner Leda Belk had with state transportation officials regarding the Wil-Cox bridge. Commissioners voted unanimously for the county manager to draft a letter of intent to the DOT saying Rowan would accept ownership of the bridge when it was available. Apparently Davidson County did the same.

The political winds shifted. Five years later, the state was trying to determine which county was more interested. According to minutes of a March 2009 meeting, Rowan commissioners bowed out on the basis of this research: “Chairman (Carl) Ford said he had talked with a former DOT maintenance worker who had been responsible for the bridge and the worker had said the bridge was not worth accepting because of the maintenance and repairs.”  Ford moved to not accept the bridge, Commissioner Chad Mitchell seconded and the motion passed unanimously.

Ford, who is from southern Rowan, went on to serve in the state House and is now a candidate for the state Senate.

The bridge that was “not worth accepting” has since been stabilized by the transportation department for pedestrian traffic. It is about to become an integral part of a recreation area with considerable history to tell. The land has important links to Native American culture, the Revolutionary War and Civil War. It will also be the northern end of the Carolina Thread Trail.

At a groundbreaking this past Monday, Dr. Max Walser of Davidson County said state Rep. Larry Potts helped secure $176,000 from the General Assembly for the bridge. The entire project has about $2.5 million to start with, thanks to the legislature and DOT.

Could Rowan pull off a similar partnership? That’s worth exploring in the months ahead. The area is important to the history of more than Davidson County. And the “Wilcox Way,” as it’s to be called, should not dead end at the Rowan County line.

Yesterday, President Trump said in a tweet, “Tariffs will make our country much richer than it is today. Only fools... read more