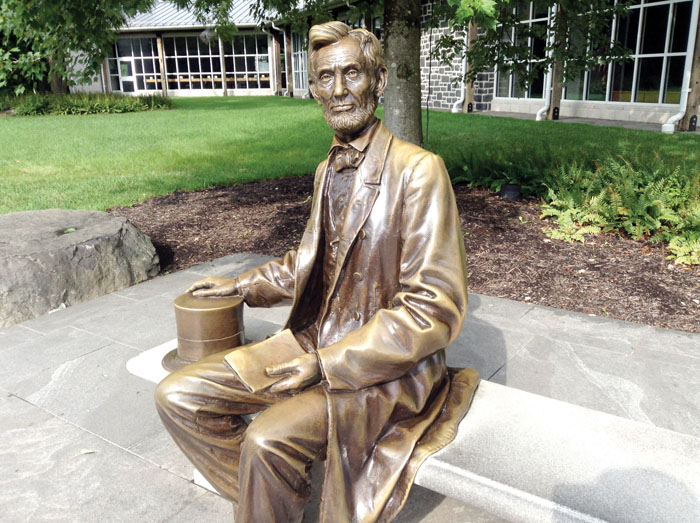 Abraham Lincoln bronze statue outside of the Gettysburg Visitors Center.

After torrential rains of nearly four inches in the late afternoon and overnight, I was glad to see that it wasn’t raining early. I paid too much for a so-so room just to be in downtown Gettysburg and have the chance to run through history early in the morning. My first four miles were through the high ground where Pickett’s Charge was repulsed by the Union soldiers. It has been forever called the “High mark of the Confederacy.” Low-hanging fog shrouded the battlefield where so many good men on both sides fell. After four miles or so, I returned to town and discovered that a portion of the battle was fought in town. It was a good thing that I carried my glasses because I stopped to read so many historical signs along the way. The Confederates had held the town for four days and fired from the houses, many of which are still pockmarked with huge holes from return fire. Most of the residents hid in cellars and only one, a 20-year-old girl named Virginia Wade, was killed while making bread.

I then drove over to the bus tour location and signed up but I couldn’t get the top of the double decker bus. Big disappointment until they allowed me to go to the top because of an open seat, especially with 77 people on the bus. Perfect day for that!

Only 2,400 people lived in Gettysburg when 160,000 soldiers descended on the town. After 51,000 casualties on July 1-3, nearly every church, school building and many houses were pressed into service as field hospitals. At one church, holes had to be drilled in the floor so that blood could drain out. The battlefield itself surrounded the town and the current National Park consists of 5,000 square acres.

States often had relatives fighting against each other, marked specifically by a Union regiment and a Confederate regiment attacking each other on Day 2. The two flag bearers were cousins. More than 1,300 monuments are in the park, more than any other. The battlefield itself is considered hallowed ground and no relic hunting is allowed. The famous Round Tops, Wheat Field and Devil’s Den were where some of the fiercest fighting occurred.

Most battle participants had walked 150 miles to get here and would walk that far back to Virginia after the southern defeat. The average age was 24 and the most common age was 19. Soldiers averaged  5 feet 8 inches tall and weighed 140 pounds while carrying 50-60 pounds of gear and wearing a wool suit in summertime temperatures.

In the fine museum at the visitors center, my friend from the trip surfaced again. Abner Doubleday, inventor of baseball and West Point graduate, was also credited with firing the first return shot from Fort Sumter. Real and moving words from soldiers on both sides are heard along with displays of how officers and men actually lived. Descriptions of daily life from suffering to fun were well portrayed. Robert E. Lee’s cot and writing desk are just an example of many actual artifacts on display.

A completely restored cyclorama standing 42 feet tall and a descriptive movie of how the battle came to be were both interesting. On Family Day, I didn’t have to use my National Park pass as everyone was free. Groups of re-enactors were scattered throughout the park. I saw a demonstration of cannon firing, surprised that each cannon took six men and up to 10 horses to fire and move it. Huge crowds were overwhelming the available parking lots on this perfect day.

I left Gettysburg reluctantly for the long drive home, moved as I always am when visiting these great battlefields. The presentations within the new visitors center were first class and well worth visiting.

Join me tomorrow for a recap of the conclusion of the trip and final thoughts. Hope to see you here for that.