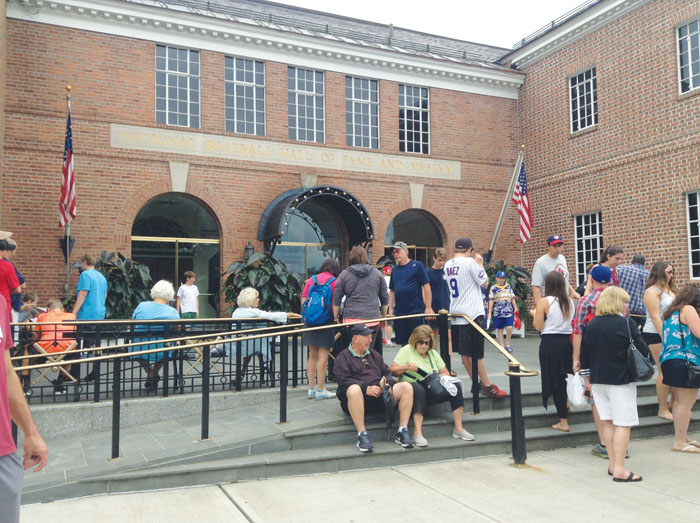 Visitors gather at the entrance to the Baseball Hall of Fame on Thursday in Cooperstown, N.Y. David Freeze/for the Salisbury Post

It rained overnight at the Twin City Motel in Bennington, and southern Vermont was warm and muggy Thursday morning.

My run was thick with humidity, but I enjoyed finding that Bennington played a part in the 9/11 debris removal and has a World War ll aircraft carrier named after it.

The Bennington also served in Vietnam and was the primary recovery ship for the Apollo moon missions.

My main goal for the day was to experience Cooperstown, New York, and the Baseball Hall of Fame.

Based on the age of my daughters, I think my only visit previously was nearly 25 years ago. The drive included a quick exit from Vermont and a route west into upstate New York.

The Adirondack Mountains dominate the dramatic scenery along with dozens of little towns that haven’t changed much since the 1800s. Usually eight o 10 miles apart, there was a certain sameness with a church dominating main street and lots of white wood two story houses.

Most were so small that they didn’t even have a convenience store. I had been trying to find a good price on gas since arriving in New York and Vermont. Most stores have it around $2.90 a gallon and as high as $3.49.

Towns like Seward, Roseboom, Pleasant Brook, Doorlo and Rockland were quite interesting, with most being founded in the late 1700s or early 1800s. I did make a couple of wrong turns but nothing too bad before realizing the error.

The drive to Cooperstown took about 2 and a half hours and culminated in the prettiest town of them all. Cooperstown, perfect for a Norman Rockwell painting, is even prettier than I remembered it, and it was chock full of baseball fans.

The museum is right on Main Street and is surrounded by a bunch of baseball stores. I had to find free parking again about three blocks away on the street.

The museum includes three jam-packed floors of facts and memorabilia. Babe Ruth and Hank Aaron had the biggest displays and, of course, the Yankees and their 27 championships dominated too. But what I looked for was little known facts or reminders of things that maybe I had heard before.

Here are a few:

• Satchel Paige pitched three shut out innings in his final game as a 59-year-old.

• The first admission charge was levied in 1858. Fans had to shell out 50 cents to see a game, which seemed quite high for so long ago.

• Famous former player and colorful manager Casey Stengal said, “The secret of managing a club is to keep the guys who hate you away from the guys who are undecided.”

• The Cincinnati Reds once tried satin shirts to make players’ uniforms appear brighter under the lights.

The current standings are posted outside the entrance for all to see. I saw an actual Honus Wagner baseball card, one of which was recently sold for $2.1 million. The contract of a player sale that sent Babe Ruth from the Red Sox to the Yankees was on display. That change of teams for Ruth forged a new direction of the game forever.

I walked over to Doubleday Field and watched a group of fantasy camp 60-year-olds in Cardinals and Orioles uniforms playing each other.

Doubleday Field was named after Abner Doubleday, recognized as the founder of the game, right here in Cooperstown.

I had a very enjoyable four hours in Cooperstown before heading back south toward the U.S. Military Academy at West Point. I plan to go there today but wanted to get reasonably close Thursday night.

At Cooperstown, I was well west of the route that I used to get to Montpelier, Vermont. When, leaving Cooperstown, I had about 150 miles to go and Siri took me through nearly all small state roads until I connected with two lane New York Route 17.

By going cross country, I ended up on the same road where the Tuxedo Motel is located and I spent the first night of this trip. I stayed there again and found out to my surprise that I was only about 25 miles from West Point.

It was a spectacular day for me and I hope today will be the same.

I saw my first ever eagle Thursday, and a guy in truck ahead of me almost ran off the road when he saw it.

Upstate New York is very similar to Vermont, beautiful in so many ways that it’s had to describe.

Today, after West Point, I plan to retrace most of the same route back to Pennsylvania and stop in at Gettysburg. I hear they have a fabulous new visitor center that needs my attention.

With that, I will leave you for now. Join me back here tomorrow for the main reason that I want to tour the Military Academy.