David Freeze: A very busy day despite lots of rain 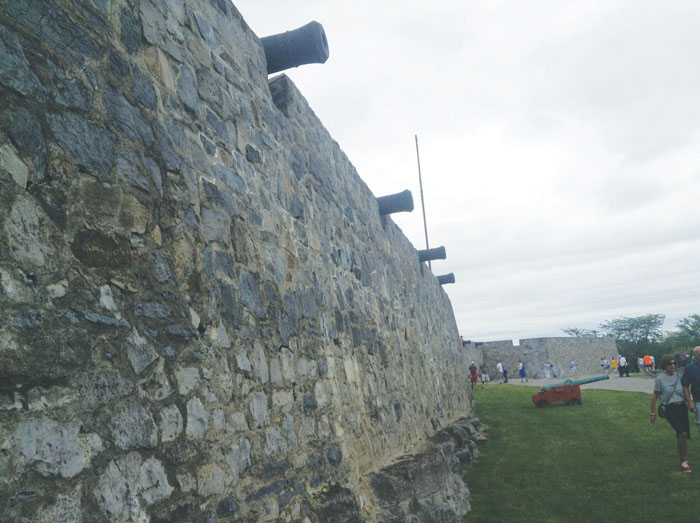 The view from the base of the walls of Fort Ticonderoga, termed as America's fort, where a major American victory occurred in the Revolutionary War. David Freeze

It was warm and sticky in Shelburne on Wednesday morning, and my tired legs managed only four miles of running. Hilly cycling and running don’t mix well for me.

I decided to leave Shelburne and follow the scenic byways all the way south to Bennington.

Vermont published a nice brochure of those scenic byways, and I got to do at least half of them by truck or bike.

As I headed south on Vermont Route 7, I noticed a covered bridge, a round barn and a paddlewheel steamer all behind fences at a place called Shelburne Museum. The place is huge, but it did not open for almost two hours, and I needed to get moving.

Continuing south to Middlebury, I found an incredibly historic town with street after street of beautiful homes from the 1800s. I counted it as one of my favorites so far, just on sheer volume of architectural history.

Then I took Route 74, just as a lark to see what the Vermont-to-New York ferry was like. What I found was a historic and still privately owned ferry that takes cars to within a couple of miles of Fort Ticonderoga.

The fort was on my list anyway, but I couldn’t find any Vermont literature on it.

The fort is actually in New York, and I headed that way. The ferry has operated since 1799 officially and since 1759 on an unorganized basis. On the ride to New York, I was the only vehicle on the barge. It cost $18 for a round trip, and postcards of the ferry were two for a $1.

The ferry barge runs with a diesel engine but follows two heavy cables across Lake Champlain.

Once across, I entered Fort Ticonderoga and expected it to be a national park where I could use my pass. Not so, as the huge location and the fort are all privately owned.

The Pell family and foundation that extensively rebuilt the fort have made it a major attraction. The fort was left in ruins several times when one country’s occupation ended and another was on the way to take over. The Americans captured the fort from the British in 1775, then lost it in 1777. French and British forces traded the fort several times, once in the bloodiest battle on U.S. soil until the Civil War.

The fort was amazing with period re-enactors and museum-style exhibits.

The ticket included a pass to Fort Defiance, an earthen fort that overlooks Ticonderoga. I met Joe and Mary Zanchi there and spent a while talking with them about various things, just as the rain began to fall.

Mary and Joe live in Nadick, Massachusetts, very near the Boston Marathon course. (I really liked them until they started talking about the Red Sox.) Afterward, I rode the ferry back across the lake and mostly followed Route 30 through the farming country and more amazing little towns.

With the rain pouring, the roads began to flood in some areas, just when I passed through Dorsett. Dorsett is the home of the oldest continuous golf course in America.

Manchester was one of the best towns, with a section called Old Manchester on historic Route 7A.

Next was Bennington, with two early highlights. One is the Battle of Bennington monument, rising above the town like the Washington Monument at 306 feet tall. The Americans kept the British from stealing food stores and eventually turned the tide of the war.

In the same area behind the first real church in Vermont is poet Robert Frost’s grave and also those of plenty of Revolutionary War era heroes. A bike ride to the top of that hill was a killer.

I have decided that Vermont reminds me of a cross between Maine and the best Amish settlements. Beautiful farms, plenty of water and lots of very old towns.

I noticed that maple syrup sells for between $40 and $49 a gallon. Old barns are huge and very well kept. Some of those barns, just like in Maine, are attached to the back of huge houses. Farmers didn’t have to go outside to tend to dairy cows that were spending the winter in the barn.

Apple orchards are everywhere, and so are those great cider doughnuts. Also, a maple creemee is a type of ice cream. Hopefully, I can get one of them before leaving Vermont.

One of the old towns has a band concert on the green every Thursday night during the summer. What is better than that?

Today, I will leave Vermont in the morning and head toward Cooperstown and the Baseball Hall of Fame. I should have plenty of time to see everything this time.

The trip gets to be more fun every day. Hope you can join me tomorrow!