Ester Marsh column: What it takes to be a competitive youth athlete 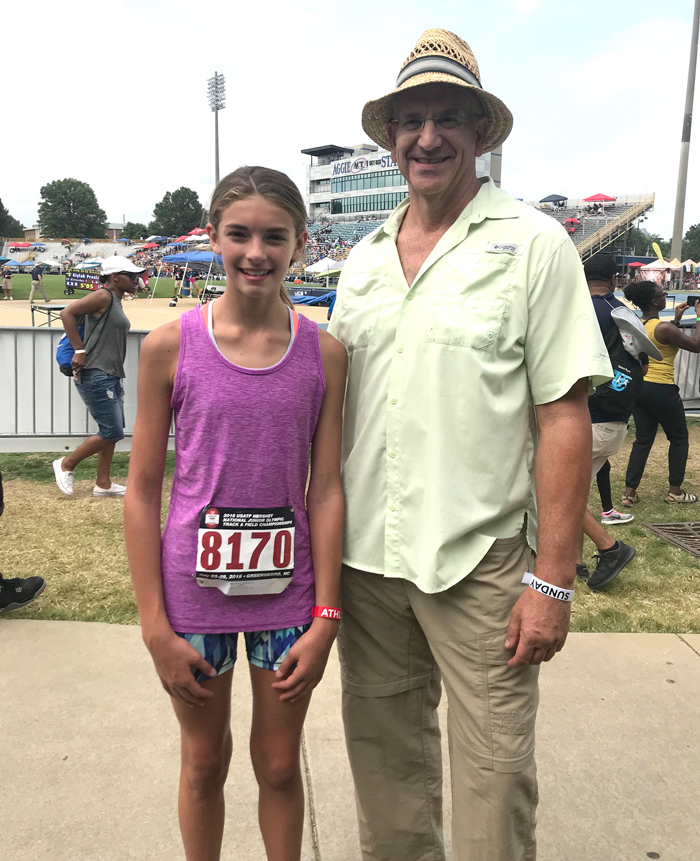 Submitted photo Hurley YMCA Warrior Macy Miller is All American at the USATF National championships in Greensboro in the 11-12 year old high jump. Top 8 is All American and she is 5th with a height of 4’9”. She is here with her coach Andy Eller. Macy attends China Grove Middle school.

I am so proud to announce that Macy Miller, Hurley YMCA Warrior and rising seventh grader at China Grove Middle School, became All American this past weekend at the USATF National Junior Olympics, this year held at A&T university in Greensboro. All American is top 8 in the country. She got a 5th place in high jump for 11-12 year old girls with a height of 4 feet, 9 inches.

The Hurley YMCA Warriors is a youth track team focused mostly on mid distance (800 meter and up) but with the help of volunteer high jump coach Andy Eller and Macy’s hard work, she has been really able to step it up. Being a youth competitive athlete isn’t easy and hard work and sacrifices have to be made. Our season begins mid-March and middle and high school kids come after their school season is over. Macy became All Conference in high jump in middle school as a sixth grader.

But what Macy can tell you, and any other youth athlete can attest, to be competitive you have to work hard. When summer gets out, youth track just gets going. The first meet is the last day in April and ends the first week in August (AAU Junior Olympics started Saturday in Des Moines, Iowa). We practice three times per week and have meets most weekends of the summer. So while your friends are going to Carowinds or pool parties, a track athlete is at a meet. I love it though — it teaches a child that you have to work hard and make sacrifices to compete. And there is no guarantee that you will win or even medal. It builds character in my opinion. Nothing comes for free and no, not everyone is a winner. What it teaches the child is to learn to accept defeat and cherish victories. Become a respectful loser and a humble winner.

What is so wonderful about track and field is that you can truly measure your improvements by time or distance. It is a big deal when an athlete has a personal record even when they aren’t close to receiving a medal. It’s hard work and time commitment. As a traveling athlete there is also a big financial responsibility which is part of being an athlete, as most parents can attest to. I know when my son Andrew was running AAU, our vacations were the Junior Olympics. It’s not just the financial part, it’s also the time away from practice and competition that doesn’t allow most competitive athletes to take a week of vacation during the summer. But seeing a kid who works hard break their own personal record, and another kid who struggled in school before, flourish in their sport, making great improvements in their school later and coming out of their shell, it is all worth it! So the next time when you see that youth athlete who puts all their time and their best into their sport, even when they don’t win or place, tell them “awesome job! I am proud of your commitment and hard work!”

Ester H. Marsh is health and fitness director of the JF Hurley Family YMCA and USATF and AAU coach