David Freeze column: Headed to Vermont in quest of the 48th cycling state 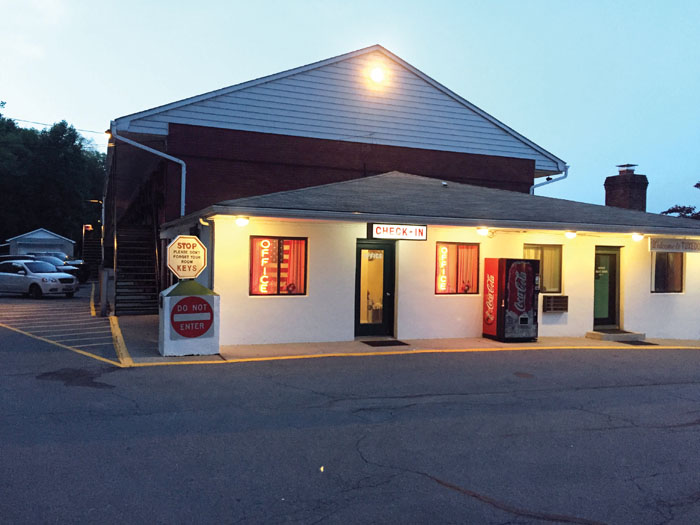 Freeze's home for the evening in Tuxedo, NY. Another great deal. Photo by David Freeze, for the Salisbury Post.

Earlier this year, after all the big cycling trips, I had just one state on my mind. Of the lower 48, it’s the only state I have never seen and certainly never biked in. With luck, all of that will change on Monday. What started as a cross-country trip in June of 2013, has now come to this. My goal is to ride Vermont, then make plans for trips to Alaska and Hawaii in 2019 to close out all 50 states.

It is close to 900 driving miles to Vermont, and I still have about 250 to go after stopping for the night in Tuxedo, New York. I am also in the Tuxedo Motel. Yes, I got a great deal on a room not more than 30 something miles from New York City. It is a very secluded and quiet town that I don’t know much about but will by morning. I do know that the Appalachian Trail crosses nearby and many of them stop at this same motel. Shopping for a motel at nearly 80 mph in heavy traffic was such a challenge that a brief stop by the side of the road was the best call.

After finishing a few things on the farm this morning, I left Salisbury about 8:45 a.m. and have been on the road since. I love driving long distances, especially when the trip includes new places. My destination will include several somewhere in Vermont but I don’t know where yet. I have a couple of bike route maps copied online from the state but hope that I will see a visitor center and get some better info. My plan is to ride a loop in one area for a day, then another area for the next day, all of this probably totaling about 3-4 days. I didn’t bring as much gear as usual for the bike to carry but that is OK. I know Vermont has some hills and hauling less weight will be nice.

I plan to run here tomorrow, then drive on to Vermont and find an area to cycle in the afternoon. Then either stay in that same area or go somewhere else for the next day’s ride. I have virtually no plans and will do this all by the seat of my pants, winging it as I go.

Today’s drive was very nice, with beautiful weather and plenty of great scenery in the Shenandoah Mountains and Civil War country. I was tempted to stop at some places that I’ve seen before along the way, but kept driving.

One highlight from today is that the Sirius radio had expired on my truck and I called to order it again for the long rides of the next several days. I was glad to get a great deal that included radio coverage of the New York Yankees. So, instead of missing a game today, I got to listen to it by radio broadcast. Six months for $50 seemed well worth it, made better when the Yanks won.

Other highlights of the day included paying only one toll so far of $1.25, that just before I got off the interstate to come to Tuxedo. There is almost no traffic here and the motel sits atop a hill and at this point is very quiet.

My only other plans for the rest of the trip after cycling in Vermont will include a stop at the Baseball Hall of Fame in Cooperstown, N.Y., later in the week. They just had a new induction ceremony there today which I also listened to on Sirius. After leaving Cooperstown, I plan to also visit the United States Military Academy at West Point, N.Y., probably the next day. I have a connection there that is the reason for my interest in going and will explain that later as well.  I have actually been to both of these places more than 20 years ago on a vacation with one of the ex-wives and our family but plan to stay longer this time.

This whole adventure should last about a week and probably will include some surprises and fun. I hope you will follow along and as always, send any tips or suggestions about the area by e-mail to david.freeze@ctc.net .