The Open: Spieth ties for top as Tiger lurks 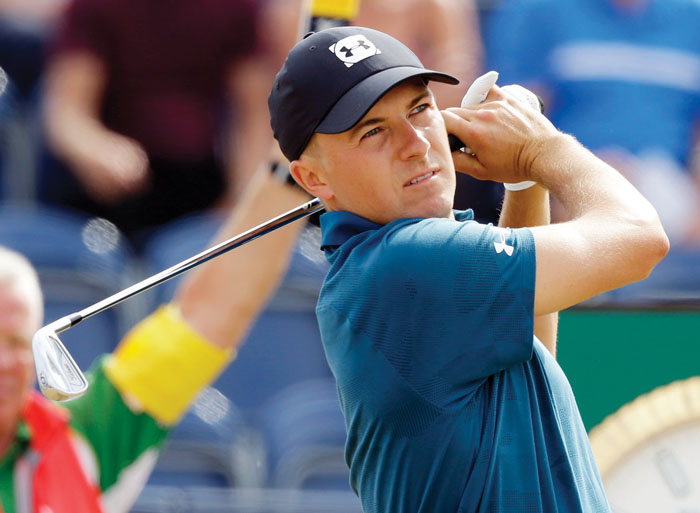 Jordan Spieth of the US plays a shot off the 3rd tee during the third round of the British Open Golf Championship in Carnoustie, Scotland, Saturday July 21, 2018. (AP Photo/Martin Cleaver)

CARNOUSTIE, Scotland (AP) — Jordan Spieth has a share of the lead in the British Open and a big edge in experience. Still only 24, he already has won three majors and his name is the last one etched on the base of the silver claret jug.

One name in the mix makes it all feel so new.

“I’ve always wanted to battle it out in a major with Tiger. Who hasn’t?” Spieth said after seizing upon a calm Carnoustie for a 6-under 65 to tie for the lead with Kevin Kisner and Xander Schauffele. “It’s kind of a dream come true just to have the opportunity.”

Never in the mix at the Masters, gone by the weekend at the U.S. Open, the 14-time major champion surged into contention Saturday with a 66, his lowest round on weekend at a major in eight years.

He didn’t have the best score. He was four shots behind.

But he’s Tiger Woods, and it felt like that again to thousands of fans who crammed along the fairways and beind the greens as Woods ran off three straight birdies around the turn and then two-putted for birdie on the par-5 14th to work his way into a tie for the lead, even if that lasted for only 20 minutes.

“I’ve shown that I’ve been there close enough with a chance to win this year,” Woods said. “Given what happened the last few years, I didn’t know if that would ever happen again. But here I am with a chance coming Sunday in a major championship. It’s going to be fun.”

It was every bit of that on Saturday, a rare day when Carnoustie had little defense.

Justin Rose, who made the cut on the number with a birdie on his final hole, matched the Carnoustie record for the Open with a 64. Spieth set the tone in the afternoon when he decided on the way to the first tee to hit driver on the 396-yard hole. He sent it bouncing and rolling along the firm turf, down a hill and onto the green to about 10 feet away for an eagle.

Moments later, Woods began his charge to get into contention at a major for the first time in five years.

It never stopped. Seven players had a share of the lead at one point. Kisner, who started the third round tied for the lead, was never far away but had to work hard to stay there. He made a tough par save on the 17th, and then got up-and-down from behind the 18th green for a 68.

Schauffele, the PGA Tour rookie of the year last season, holed a 30-foot putt from behind the 18th green for a 67.

“We’ve got pretty much a new tournament tomorrow,” Spieth said.

A dozen players were separated by four shots, which is nothing considering that the last two British Open champions at Carnoustie rallied from 10 shots (Paul Lawrie) and six shots (Padraig Harrington) on the final day.

The wind is expected to be the strongest it has been all week. And then there’s the presence of Woods, playing in the third-to-last group.

Woods started quietly enough with a few birdies through eight holes. He started his move with a 40-foot birdie putt on No. 9, followed with short birdie putts on the next two holes and with a two-putt birdie on the par-5 14th, he put his name atop the leaderboard.

It was there for only 20 minutes. But it was there.

A bogey on the 16th and a par save from short of the Barry Burn on the 18th gave him a 66. He figured it would at least keep him in range. He wound up as close to the lead as he has been in a major since he was two behind at Muirfield in the 2013 British Open.

And he has company.

Kevin Chappell, who spent most of his round watching Spieth put on a show, birdied the 18th for a 67 and was two shots behind.

Francesco Molinari had a 66 and will play in the third-to-last group with Woods. They were last together three weeks ago when Woods presented him the trophy at the Quicken Loans National after Molinari shot 62 for an eight-shot victory.

Twelve players were separated by four shots, a group that includes Rory McIlroy, Tommy Fleetwood and Zach Johnson. They all dropped shots on a day when there was no time to be going backward. McIlroy was within two shots of the lead until bogeys on two of his last three holes for a 70 left him four behind.

Johnson, staying in the same house as Kisner, Spieth and four other Americans, hooked his approach on No. 12 and three-putted for a double bogey. He shot 72 and was in the group four behind. Joining them was Tommy Fleetwood, who dropped three shots in two holes on the back nine on his way to a 71.

Of the five players separated by three shots, only Spieth has experience winning a major. He will try to become the first player since Padraig Harrington in 2008 to win golf’s oldest championship in consecutive years.

His move started with a sudden decision.

The opening hole is 396 yards on the card, with the fairway getting narrow between two bunkers. Spieth, who spent Saturday morning watching the Open on television, asked caddie Michael Greller on the practice range, “Do we like driver?”

Greller told him no. Play short and it’s a wedge to a front pin, easy birdie chance.

Spieth walked to the tee with coach Cameron McCormick and asked him, “How about I just send it on No. 1?”

“I felt good about the range session. And he’s like, ‘I put my chips behind anything you decide, always.’ And that kind of gave me that little extra boost,” Spieth said.

He stuffed his approach to 2 feet on No. 4 and made two short birdie putts until he came to the par-3 16th, when his 5-iron settled 12 feet away for his longest putt of the day.

This is the 16th time he has been in at least a share of the lead in the majors in the five years he has been playing them on a regular basis. And it’s the first time he has had to look over his shoulder at Woods.