Long shot dads … and the sacrifice that saved them 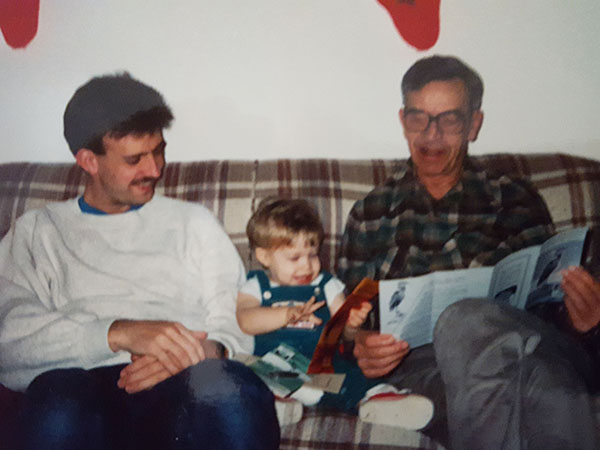 In a 1990 photo, Rob Wienandt, left, young son Zach and Rob's father, Dale, share a moment. Zach, now 27 and living in Raleigh, is the one who found the Salisbury National Cemetery grave of Pvt. Oliver Phillips, who served with Dale during World War II. Submitted photo.

Editor’s note: This column, written in 2018, is one of two columns submitted by Robert Wienandt of Wisconsin about his father and the young Concord man who probably saved his life in World War II.

His name was Oliver and he was 18 when he died.

Oliver Phillips was from Concord and is buried in Salisbury National Cemetery.

Last year I wrote about my father being wounded and surviving in WWII. After I wrote my article (part 1), my son Zach started doing some research. He first found my father’s service number — no small undertaking as the government had misspelled our last name. Fortunately we’re used to that so Zach worked around it. He then found Phillips and where he was buried.

While we were visiting Zach in Raleigh in March, he and I drove to Salisbury and found the cemetery. It’s a large and interesting but somber place. It was first a Confederate prison built to hold Union captives during the civil war. It became tremendously overcrowded and under-resourced during the war, leading to a large number of deaths by disease and malnutrition. There is a large area of the cemetery which remains cordoned by markers in which an estimated 3,800 to 11,700 men were buried in trenches.

While we both love history, we were there for another reason. Zach had done his research well and knew the section of the cemetery to search. It wasn’t long before we were standing in front of the marker for Army Private Oliver D Phillips, who died just two days before he turned 19.

It’s a sobering thing to stand by a marker like that and think about Oliver and his family. They likely received a letter telling them about his death but probably never learned the details. It’s also sobering to think about what might not have been. Why did the German soldiers choose to take Phillips first with their machine gun, instead of my father who was actually closer and an easier target for them?

We all have close calls in our lives and every decision we make impacts some future event in some way. This Father’s Day I’m again grateful for the abundant life I have, for the strong father I had and for the tremendous family I have in my wife Tammy Louise, son Zach Wienandt and his girlfriend Lizzie Farquhar —  things that Phillips never had the chance to experience.