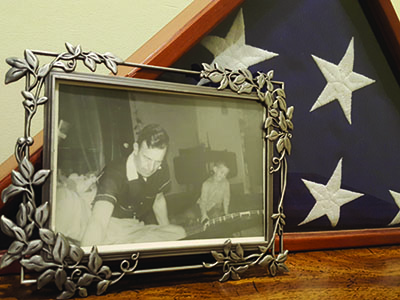 A young Robert Wienandt can be seen in the photo above with his father, Dale, who survived World War II in part because a young Concord private with him took the brunt of a German machine gun attack. Submitted photo

Editor’s note: This column, written in 2017, is one of two columns submitted by Robert Wienandt of Wisconsin about his father and the young Concord man who probably saved his life in World War II.

His name was Phillips and I never knew him.

My dad was a WWII veteran and, like many combat vets, he spoke very little about his experiences. I knew he had served in Europe and had been wounded in action. It wasn’t until he was diagnosed with the cancer that would ultimately take his life that I learned more details.

On Jan. 14, 1995, he told me about his diagnosis and then said, “Exactly 50 years ago today I was hit by German machine gun fire. I was lying in a shallow ditch, bleeding to death and couldn’t get out and no one could get to me. I was 21 and never thought I would live to be 22. Now I’ve got kids and grandkids. Everything since then has been pretty great.”

Further details emerged: He was a farm boy from Wisconsin who knew his way around the woods. So it was natural that he was “on point” — meaning, he took the lead as his squad moved through the countryside.

On Jan.  14, 1945, he was on point and a guy named Phillips was behind him when they came up on a hidden German machine gun nest. For whatever reasons, the Germans decided to take Phillips first and killed him instantly. My dad tried to get to safety by sneaking tree by tree but was eventually hit. Fortunately, when darkness came he was finally able to crawl a bit and others helped him make it out alive.

Lately, I’ve been thinking a lot about Phillips, too. Did he have a family? What happened to them?

I am talking about being a man who stands up for what he knows is right, stays with his family even when it’s hard, is an example to those who are watching (and not watching) about how to be a quiet hero; lead a purposeful life, work hard, be there for your kids, make interactions with others transformational rather than transactional, be a voice of calm and reason in a turbulent world, bring your paycheck home instead of stopping at the bar or casino, and put your wife and kids first, always. That’s the greatest tribute I can give to Phillips and my dad.

I’m trying to make the most of my long shot in many small ways. What are you doing with yours?