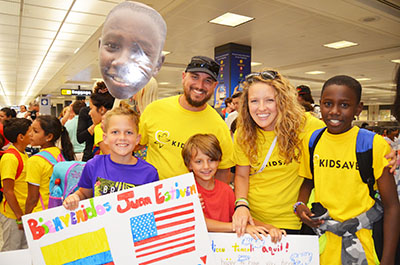 CHINA GROVE — Juan Estiven is 12 years old, a Colombian orphan with little chance of being adopted in his own country.

He’s not much different from the Russian kids that Kidsave founders Terry Baugh and Randi Thompson saw in orphanages in 1993. Because of the organization’s work, Juan has a chance to have his own family, one right here in Rowan County.

Ashley and Adam Pethel’s boys go to North Hills Christian School and look forward to the performance of the Children’s World Choir each January. Ashley found out what it might take to host a member of the choir, then took it another step.

With a friend’s help, she began researching what it might take to host a child for the summer. Ashley explored the Kidsave Gallery of Kids Facebook page.

“I just couldn’t let it go,” she said. “I even prayed and asked God to make it go away. I was sure Adam wouldn’t be interested.”

But Adam surprised Ashley with, “We can look into it.”

After lots more prayer, plenty of background checks and a complete study of their home, the Pethels made the list to host one of 12 kids who arrived at Washington Dulles International Airport on June 28.

They met Juan and his chaperone, 32-year-old Jamid Morales, and after spending a night in the nation’s capital, brought them home.

Morales was traveling as a Kidsave chaperone for the first time, having met Juan at a preparatory camp to introduce orphans going to the United States to the culture and help them learn about U.S. language, food, behavior, manners and more.

Juan had lived in a foster home or an institution in Colombia since he was 6. He and the other children were told that they were just coming for a vacation and to have fun. Organizers and host families don’t want them to get their hopes up about being adopted.

The Pethels will host the chaperone for about a week, and then he will visit with other host families until returning to Colombia with the children on Aug. 2.

Ashley said they went through a transition.

“After the first day, its been OK. It was only a little uncomfortable at the airport in the beginning.”

Juan speaks Spanish but is picking up English words and phrases. Morales is the interpreter, but Ashley is learning Spanish quickly.

Since Juan is here to have fun and learn about America, the Pethel family has planned outings to Carowinds, Boone and the beach, as well as skating and bowling. He has a birthday party scheduled for July 29, when he turns 13. Tea for Two Catering of Salisbury will provide chocolate and strawberry cakes and an ice cream cake.

Juan, along with Auden and Asher Pethel, will spend plenty of time at South Rowan Library and South Rowan YMCA, where Ashley works as an instructor, as well as Defy Gravity and Rowan Christian Assembly, the Pethels’ church.

While the Pethels have been cleared to adopt Juan if they decide to, it’s too early to make that call. The host families agree to advocate for the child first, talk about Kidsave and introduce the child to other families who have shown interest. The Pethels have already had Juan’s teeth cleaned, donated by Dr. Lucas Merrill in Landis, and he will see Dr. David King for a vision exam in China Grove as well as the Pethels’ family physician, Dr. Robert Levy.

Morales, a psychologist, said all the kids have been screened to see who can handle a trip to the U.S.

“I am here to advocate for them, beginning to end,” Morales said. “There are eight chaperones, two who regularly work for the government and six more who are contracted for this trip. My main responsibility is to support them, ‘the child first.’”

“This is something different for sure,” Auden said. “I was comfortable with Juan after the first day and really at ease after three days. When we are trying to communicate, we sometimes act it out. Our real connection is soccer. We both love it. But when he understands something, Juan smiles right away. When he doesn’t, he frowns and cocks his head.”

Juan spoke through his interpreter, Morales.

“I am glad to meet different people and see different cultures,” he said. “I like everything so far and am especially looking forward to going to the beach and the roller coaster. Yes, it has been fun sharing with Auden.”

Once the summer visit is complete, Juan will return to Bogota, Colombia, for a three-day camp, where he will discuss what he liked. There will be pictures of contacts, and Juan can say what he thought of each one. Then comes a two-week period back with his foster family. Anybody can apply to adopt.

While the family knows that adopting Juan is a possibility, that isn’t the main goal for his visit.

“We just want to have fun with Juan while he is here,” Ashley said. “No pressure. We’ll leave the adoption answer with Adam and in God’s hands. So far, we know that Juan is very kind, gentle, well-mannered, well-behaved, good-hearted, good-spirited, caring, thoughtful, loves to play and loves dogs. I could keep going, but I will stop at that.

“I have already answered questions for 10 people in four days. They just want to know more. Our ultimate goal is to find him a home. Anything else is a bonus.”

Find out more at www.Kidsave.org or by contacting Ashley Pethel at ashleypethel@msn.com or 980-521-3433. Since 1999, more than 1,833 Kidsave children have traveled to the U.S., and 80 percent have found adoptive families.

Interim pastor has a full-time approach