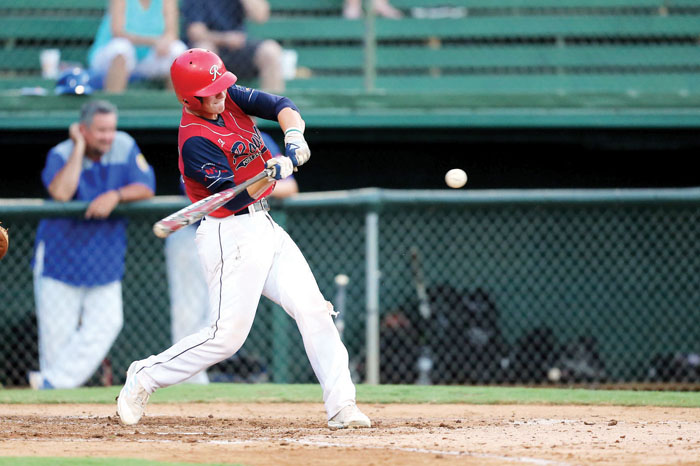 James Sipes / for the Salisbury Post Trevor Atwood opens the top of the fourth inning with one of Rowan’s four home runs on the night. Rowan Legion defeated Mooresville on Saturday, 20-4.

SALISBURY — Somebody must have paid the power bill at Newman Park.

Rowan County erupted for 18 hits Saturday night — including nine for extra bases and four that left the yard — in a thunderous, 20-4 victory against visiting Mooresville.

“Everyone was swinging at good pitches tonight,” first-baseman Chandler Lippard said. “When they threw strikes, everyone hit the ball hard.”

Including Lippard, who launched the last of the pre-holiday rockets in the Rowan fifth inning when he connected on a 1-2 fastball from Kiren Wilson — the fourth of five Post 66 pitchers — sending a drive blazing through the balmy summer air and over the left-field fence with two runners aboard.

“Lippard can hit,” coach Jim Gantt stated matter-of-factly after Rowan (21-6, 7-2) won its sixth straight and remained tied with Kannapolis for the Southern Division lead. “He’s having a really good year at the plate. And he’s so dependable on defense.”

Even on a night when starting pitcher Hayden Setzer wasn’t himself, Mooresville (4-14, 1-8) stood little chance. Setzer, who fired complete-game shutouts in each of his last two assignments, pitched three roughshod innings and left amid a rainstorm of line drives with a 6-4 lead.

“He didn’t locate as well tonight,” said RC catcher Trevor Atwood. “You could tell something was wrong.”

Something was. Gantt revealed afterward that the southpaw pitched with a slight pain in his left forearm.

“Hayden struggled. He didn’t look like he was ready when he started,” the coach noted. “He told Coach (Russ) Weiker the inning we took him out that his forearm was bothering him some. It wasn’t his elbow, it was his forearm, so it could just be dehydration.”

The victory went to lefty Jake Perez, who tossed three innings of scoreless relief. He got some brilliant defensive help, beginning when second-baseman Bryson Wagner initiated a double play in the top of the fourth. In the fifth Perez surrendered Dawson Salter’s scorching double down the right-field line, but escaped when he picked him off on an attempted steal. Then in the sixth, center-fielder Daniel Sell charged toward the infield and made a sprawling catch to rob Jaxon Mays of a hit.

“I thought Perez located very well,” said Atwood, who homered and scored four times. “His curveball was on and off, but that was enough to keep their hitters off-balance. But mostly, he benefited from nice plays by the infield and the outfielders.”

Not to mention the batting order. Everyone in Rowan’s starting lineup had at least one hit as the locals batted around in the first, fourth and fifth innings. They scored five runs against losing pitcher Jake Burkett in the last of the first and 10 against firemen-turned-arsonists Malachi Wilson, Andrew Martin and Kiren Wilson in the fourth. Wayne Mize — Rowan’s first-year outfielder who looks like he could bench press the grandstand — contributed three doubles, a sacrifice fly and four RBIs. Shortstop Clayton Gilmore reached base five times, delivering three singles, a run-scoring hit-by-pitch and a fifth-inning walk.

But the most unlikely slugger in the lineup was undersized CP Pyle, a rising sophomore expected to take handoffs for Carson High School’s football team in the fall. He gave Rowan a 10-4, fourth-inning lead with a two-run homer that crashed off the top of the old scoreboard in left-center, popped into the air and disappeared behind the wall.

“I used to be a power hitter in middle school,” Pyle explained after slugging his first round-tripper. “But with a runner on second and one out, I was just trying to go to the right-field gap and advance the runner. I made good contact. It’s from listening to the coaches — wait on it and snap it on time.”

Unfortunately, there was a downside to Pyle’s heroics.

“His mom wasn’t here to see it,” Gantt said. “She was at somebody’s wedding or a rehearsal or something. I guess weddings have messed up a lot of good moments this season. But he hit the ball hard. We call him ‘Little Puig,’ after Yasiel Puig of the Dodgers. He’s got that big blue glove and he’s solid because he plays football.”

On this night, all of Rowan’s hitters were plugged in.

NOTES: Setzler led off the bottom of the first with a towering home run to left-center, his sixth of the year. … Besides Mize, Luke Barringer and Lippard stroked doubles. Lippard leads Rowan with 30 RBIs. … Mooresville pitchers hit five Rowan batters with pitched balls, including one that Atwood caught barehanded against his left hip. … Rowan plays its final Southern Division game tonight at Mooresville. Gantt indicated that Sell (2-2) will start in place of John Owen as he tries to allign his post-season rotation. … Kannapolis (7-2) remained tied for first with a 6-5 win over Stanly County. … Rowan’s non-league game scheduled for Monday against Kannapolis has been cancelled.

Female Athlete of the Year: Everything looking up for…