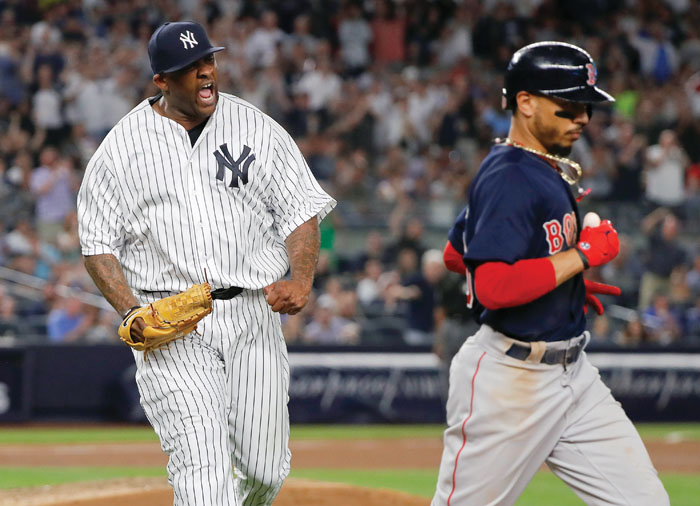 So, CC Sabathia, did it feel like a really big night in Bronx?

Instead, he just pitched as if the calendar read October, rather than June.

Sabathia shut down the high-scoring Red Sox, Greg Bird hit two home runs and Aaron Judge connected off a college teammate as New York bopped Boston 8-1 on Friday evening to edge ahead in the AL East.

Not since the famed Bucky Dent playoff game in 1978 had the Yankees and Red Sox met so late in a season when they owned the two top marks in baseball. Home runs decided this matchup, too, with Miguel Andujar also going deep for New York.

“I mean, we’re a good club,” New York manager Aaron Boone said. “We’re a confident group, we know we can play with anyone.”

The biggest crowd of the year at Yankee Stadium was in the spirit as lines forming outside the gates more than 3 1/2 hours before the start. The pro-Yankees chants began prior to the first pitch, the anti-Boston shouts soon followed.

Sabathia (5-3) helped end Boston’s four-game winning streak, less than a month from his 38th birthday. He gave up one run and six hits in seven innings, and improved to 6-0 in his last seven starts against  the Red Sox.

The big lefty bounded off the mound to field Mookie Betts’ tapper and throw him out to end his outing. Slowed by knee problems in the past, a pumped-up Sabathia kept in motion and jogged to the dugout.

“High-stepping right there, you mean?” he said.

Betts and Andrew Benintendi hit consecutive doubles in the fifth for Boston’s run in the opener of a three-game series.

“It’s important,” Betts said. “As long as we make it to the playoffs, anything can happen.”

Steve Pearce, acquired a day earlier from Toronto, batted cleanup in his debut for Boston. He doubled on the first pitch he saw and also singled off Sabathia.

“I was actually kind of jittery my first at-bat, so it was good to get that out of the way,” Pearce said.

“It would have been nice if we got the win, so that kind of overshadowed what I did at the plate. But I felt comfortable,” he said. “It was a great atmosphere.”

Eduardo Rodriguez (9-3) gave up five early runs. Boston fell to 3-4 against their rivals this season, and 12 more games are left.

Judge connected for his 21st homer, a two-run drive in the seventh off Justin Haley. The former Fresno State players eagerly chatted for a while behind the cage during batting practice — the rookie reliever angrily kicked at the mound dirt as Judge circled the bases.

“We were really good friends, and it’s a joy to see him having success,” Judge said. “We respect the competition. He might strike me out tomorrow, and I’ll tip my cap to him, and it’ll be see you down the road.”

Gleyber Torres hit his first career triple and scored on Andujar’s single in the second. Torres added a sacrifice fly in a four-run fourth, capped by back-to-back homers from Andujar and Bird.

Bird added a solo drive in the eighth. The Yankees lead the majors with 131 home runs.

“No matter who you facing, if you miss on the plate that’s what’s going to happen,” Rodriguez said.

Red Sox: 2B Dustin Pedroia and knuckleballer Steven Wright will see a doctor Monday. Both are on the 10-day disabled list.

Yankees: RHP Masahiro Tanaka (strained hamstrings) threw 48 pitches in a simulated game at the spring complex in Tampa, Florida. He’s expected to pitch in a minor league rehab game in the middle of next week, then could rejoin the Yankees.