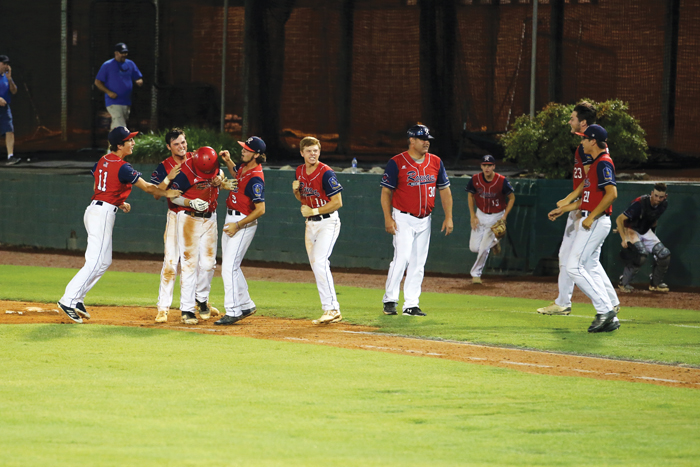 James Sipes/for the Salisbury Post ... Wayne Mize, center, is mobbed by his teammates after his infield single drove in the winning run against Kannapolis at Newman Park Wednesday night. Rowan entered the bottom of the 7th inning behind, 3-2, but rallied for a 4-3 American Legion baseball victory.

So Post 342 broke its lease Wednesday night at Newman Park, where it scored twice in the bottom of the seventh inning to beat Kannapolis, 4-3, moving into a tie for first in the Southern Division standings.

“Well, we’ve still got two games to go,” coach Jim Gantt warned after Rowan’s dramatic victory. “But this was a huge win.”

“Rohan’s a really good pitcher with a good, hard fastball,” said Gilmore. “He likes to get ahead with the fastball and gets it in on you quick.”

That helped Gilmore guess right when the count went to 1-2 with one away in the Rowan seventh. He barbecued a room-service fastball and drilled it to the gap in right-center field. “He left it right over the plate,” he said. “I just took it where it was pitched.”

As the ball rolled across the warning track and reached the outfield wall, third-base coach Seth Graham windmilled Gilmore all the way to third base. Atwood then reached on a hit batsman and alertly moved to second on a one-out wild pitch, giving Rowan two baserunners in scoring position.

“We’re a gritty team that doesn’t like to lose,” said Rowan starting pitcher Daniel Durham. “And we tend to score more in the later innings.”

Rowan tied the score on Lippard’s flyout to center, a drive deep enough to move Pyle to third base. With two down, Mize fought off a 2-2 heater from Handa and needle-pointed a grounder between shortstop and third base. Pyle sprinted home as shortstop Lane Argabright backhanded the ball and made a long, low throw to first that had little chance of beating Mize.

“My approach was to hit the ball up the middle if he threw me a fastball,” said Mize, the quick-wristed outfielder with ham-hock forearms. “If it was a curve, I was gonna jerk it down the left-field line. He threw a little curveball. I had a great look at it and knew I’d be able to beat it out.”

The play made a winning pitcher of Bryson Wagner, the right-hander who earned a save in Tuesday’s victory at Stanly County. This time he entered with one out in the top of the seventh and retired both Jason White and Argabright in succession. Durham, sick with a virus earlier this week, pitched admirably for 6 1/3 innings. Although he yielded eight hits — including doubles to Argabright in the fifth inning and Jacob Tuttle in the sixth — he kept Rowan within striking distance.

“Yeah, I actually wasn’t supposed to be out there in the last inning,” Durham said after fanning four batters and walking two. “(Pitching coach Russ Weiker) tapped me in the dugout and told me I was done, but I didn’t hear him. So I went out there until they came and got me.”

It didn’t matter. Durham, a rising senior at West Rowan, did his job. Blending an adequate fastball with a slow-bending curve and a change-up that could put a hitter in traction, he earned the Coach Gantt Seal of Approval.

“The way he pitched, he covered every corner of the plate,” Gantt said. “It’s hard to hit when you’re always guessing. The key for him was getting ahead in the count — and he did that.”

Durham threw first-pitch strikes to 21 of the 27 batters he faced and induced six groundouts, including a wacky inning-ending double play that ended the top of the sixth. With runners at second and third and two out, Handa grounded out to Lippard at first base. Lippard fired a throw across the diamond to Wagner, who tagged Cordarius Butler just shy of third base, then threw home to nail Tuttle trying to score.

“It was actually a triple play, but we only needed two,” Gantt said. “We were lucky on that one. Lippard made a heck of a play.”

NOTES: Rowan closes its Southern Division season with a home-and-home series against Mooresville this weekend. Gantt said southpaw Hayden Setzer (4-1) will start Saturday night at Newman Park and right-hander John Owen (5-1) will take the ball Sunday night on the road. … Kannapolis (9-7, 6-2) wraps up division play with a home game against Stanly on Saturday and a trip to Mocksville on Sunday. … The playoffs begin July 3 and the division champion gets a first-round bye.

Prep Basketball: Causby to take the reins at North…